Figures released by SQM Research this week have revealed that the number of residential vacancies nationally has picked back up slightly during November, recording a vacancy rate of 2.3% nationally, and 71,737 vacancies.

Vacancies appear to be following the common seasonal trends expected at this time of year, where rental accommodation tends to become more available for a variety of factors.

The most predominant of these factors is the departure of University students from their regular rental accommodation over the long four month summer break.

Perth and Darwin have continued to record alarming increases in vacancies, whilst many of the other capital cities have remained stable year-on-year.

However, Hobart and Melbourne have recorded yearly declines. SQM

Research believes the falls in Hobart most likely relate to the recovery in its local economy, in turn being benefited from the lower Australian dollar helping its local tourist industry.

Year-on-year results for Sydney reveal a tight residential market, with November recording a vacancy rate of 1.7% based on 10,045 vacancies.

Notably, Darwin has recorded a fall in asking rents of 20.0% for houses and 13.7% for units for the past 12 months, according to SQM Research.

Yearly falls have also been recorded in Perth, with asking rents down 7.6% for houses and 7.8% for units.

In contrast, Hobart recorded an 8% for houses and a fall of 1.3% for units.

Asking rents in Melbourne and Sydney have also recorded modest rises for the same period.

2015 overall has recorded another year of modestly rising vacancies.

It suggests the supply side has been running a touch ahead of underlying demand at the national level.

As we predicted back in October, I believe rents in 2016 will record only modest rises with the outperforming areas likely to be the Gold Coast and Hobart. 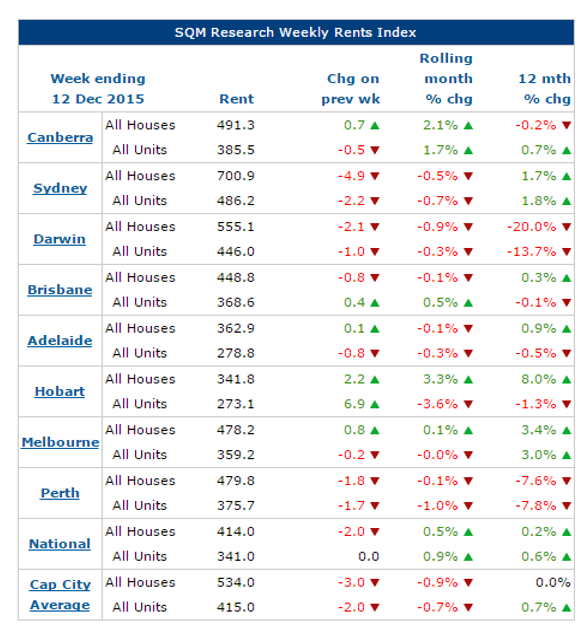 'Seasonal Holiday Spike in Vacancy Rates' have no comments