Numbers Don’t Need to Be King

Imagine you’re sitting in an auditorium full of all kinds of people.

Everyone is there to learn about what to do with his or her money.

All of a sudden, the door to the room opens, and in walks the much-anticipated speaker.

Who do you think it is? 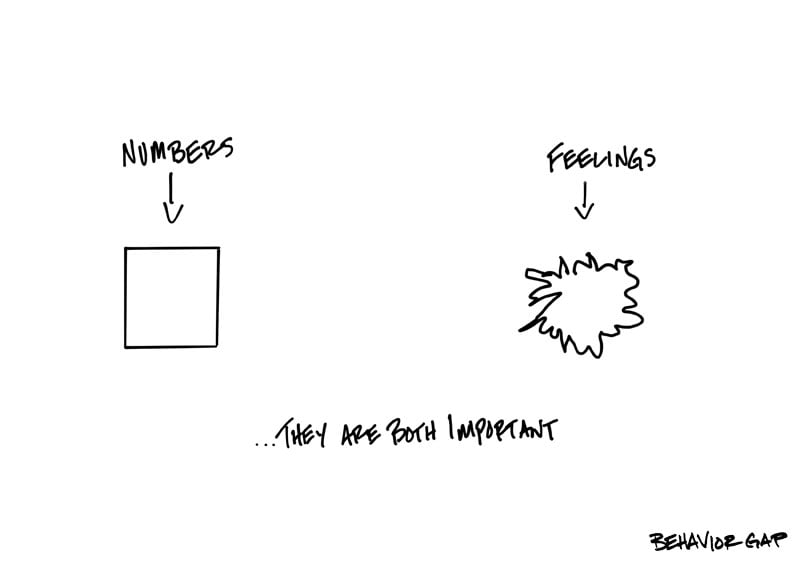 The famous speaker is Numbers.

Numbers is that really smart person who is always right and always rational and whose suggestions fit nicely into a calculator or spreadsheet.

Numbers is the gatekeeper for truth.

And when Numbers speaks, all of your other friends — Feelings, Emotions, and Intuition — must shut up and listen.

Those are just the rules.

If you’re like me (and most people I know), you’d probably turn to your neighbor and whisper: “Numbers? Who put that joker in charge? Numbers isn’t even human.”

And yet most of us probably wouldn’t raise our hand and ask for a different speaker.

My question is: Why not?

When I think about personal finance, I feel like we’ve created a world for something we aren’t.

This world we’ve made is one for Mr. or Ms. Rational Human, a world where numbers are king, where everything else is secondary and unimportant.

There’s not a lot of patience in this world for things that don’t fit into a calculator.

Even just mentioning “feelings” or “intuition” makes me feel that I should be sitting in a drum circle with people reeking of patchouli.

That is how strong a stereotype we’ve created around these things we all experience.

How did we get to this spot?

Early work in the field of economics made some assumptions, out of a desire to make things fit in a spreadsheet, about how people act (or react).

The assumption was that the typical person is a rational being who makes informed, measurable decisions based on things we can quantify and calculate.

It was also assumed that people would always act in their own best interests (which, by the way, is to make more money).

But that assumption — which turns out to be the foundation of most modern economic theory — is wrong.

Plenty of research over the years has pointed out this problem.

The latest example is a study that Michael Kitces highlighted in a recent blog post.

This study found that “having readily accessible sources of cash is of unique importance to life satisfaction, above and beyond raw earnings, investments or indebted

Raise your hand if those findings surprise you.

This is not rocket science, people.

We all know that we do irrational things.

It makes no sense for you to have cash on hand when you could be investing it instead.

At least, if Numbers were in charge, that would be true.

But Numbers isn’t in charge.

My experience, plus the study above and many other examples of how people interact with money, bears that out.

Want to know why it makes sense to have cash on hand?

Because we feel better when we have cash on hand! It doesn’t matter if it’s rational.

And the study suggests it’s probably also true for many of us.

I’m not saying we should ban Numbers from the room altogether.

Numbers has a time and a place, but we should be careful not to let Numbers always be the keynote speaker.

In the end, the point of money is not to make you more money.

The point of money is to help make and keep you happy and fulfill the hopes and dreams that align with your own (often irrational and emotional) values.

So as long as Numbers helps you with that, let Numbers talk endlessly.

But when it starts to get in the way, it’s time to pass the microphone.

This column appeared originally in the New York Times.