We can expect interest-only (IO) lending to increase over the year ahead as investors come back into the market.
Despite this, with more and more IO loans continuing to expire the stock of IO loans outstanding continues to decline.
By March 2021 only 14 per cent of the outstanding housing loan stock by value was on IO terms, which is comfortably the lowest share on record.
This figure will likely bottom out by the end of this calendar year at about 13 per cent, which is down from a peak of 39 per cent back in 2016. 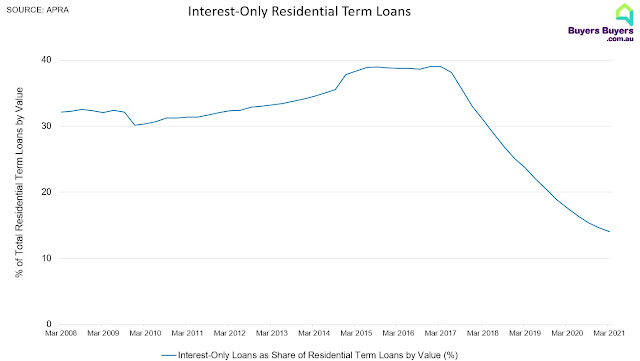 The share of housing loans approved with a loan-to-value ratio of 90 per cent or above pulled back from 11.3 per cent in the December quarter to 10.4 per cent in the March quarter.
It wouldn't be surprising to see this share falling back below 10 per cent over the coming months as the supply of first homebuyers taking up the government's deposit scheme is gradually exhausted. 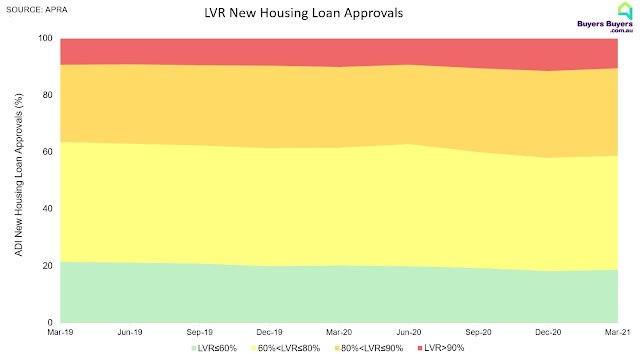 There has been an increase in higher debt to income lending over the past two years, most notably to borrowers with a ratio of 6x or above, but in truth there hasn't really been any indication of a relaxation in lending standards.

It's become fashionable to refer to all lending to investors, on interest-only terms, on low doc terms, to higher debt to income borrowers, or to self-managed superannuation funds, as "riskier" lending.
But while this may theoretically be true in aggregate, this isn't necessarily the case.
Overall, the loan approval processes are considerably tougher than they used to be, and the currently cycle has overwhelmingly been driven by first homebuyers and upgraders, rather than speculation from investors.
Meanwhile more loans than every before are being paid down, so nationally the household debt to disposable income ratio has been in decline, while serviceability is presently very comfortable.