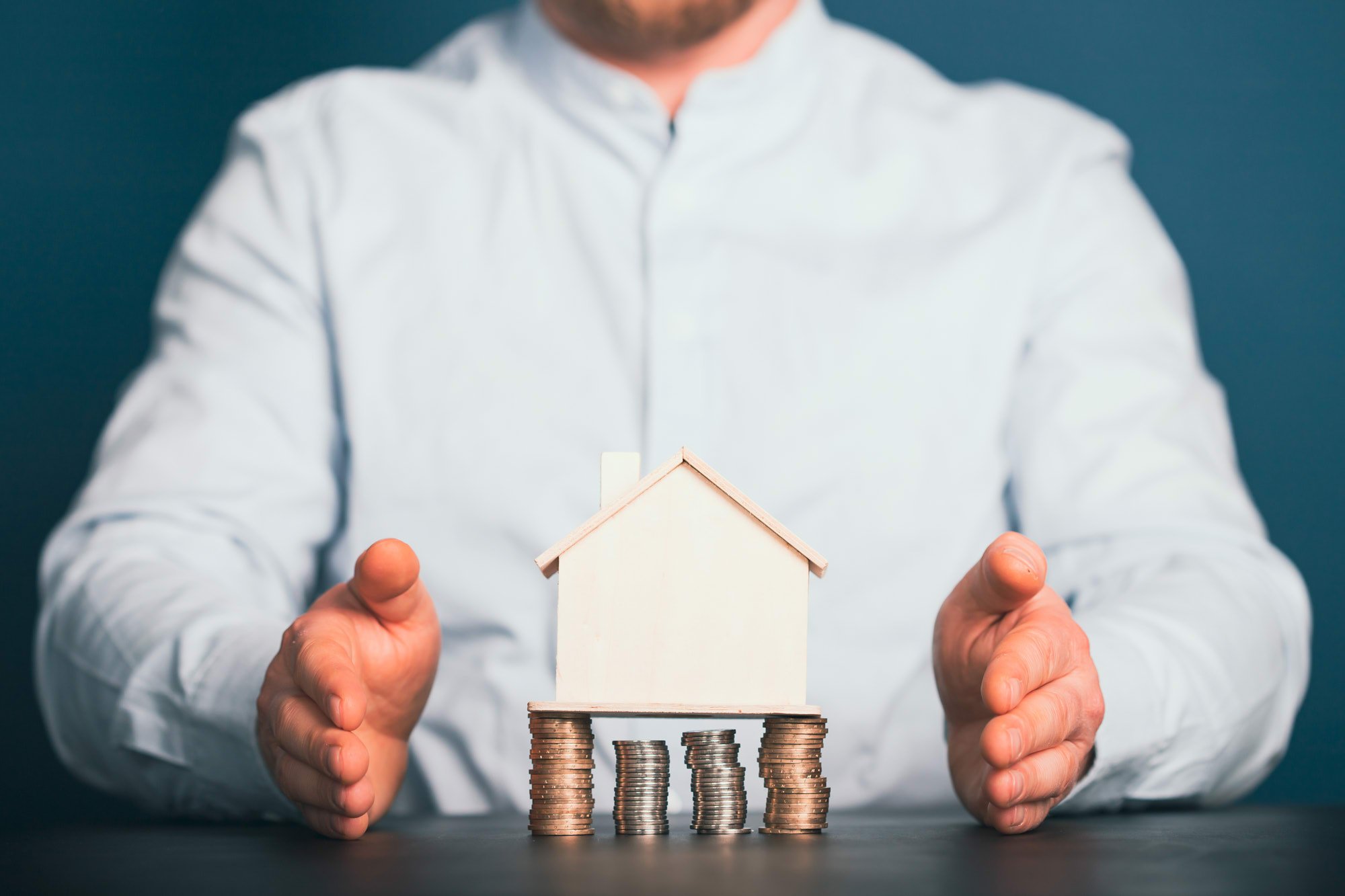 After national dwelling values surged 28.6% through the pandemic growth phase, values are now -2.0% below April’s peak.

Brisbane also edged into negative growth territory for the first time since August 2020, with values down -0.8%, while Canberra (-1.1%) and Hobart (-1.5%) were also down over the month.

Perth (+0.2%), Adelaide (+0.4%) and Darwin (+0.5%) remained in positive growth through July, however most of these markets have recorded a sharp slowdown in the pace of capital gains since the first interest rate hike in May.

On the other hand, we're experiencing a rental crisis and rents are rising around Australia.

After national dwelling values surged 28.6% through the pandemic growth phase, values are now -2.0% below April’s peak.

Five of the eight capital cities recorded a month-on-month decline in July, led by Sydney and Melbourne where values fell -2.2% and - 1.5% respectively.

Brisbane also edged into negative growth territory for the first time since August 2020, with values down -0.8%, while Canberra (-1.1%) and Hobart (-1.5%) were also down over the month.

Perth (+0.2%), Adelaide (+0.4%) and Darwin (+0.5%) remained in positive growth through July, however most of these markets have recorded a sharp slowdown in the pace of capital gains since the first interest rate hike in May.

Housing market conditions are likely to worsen as interest rates surge higher through the remainder of the year.

The rate of growth in housing values was slowing well before interest rates started to rise, however, it’s abundantly clear markets have weakened quite sharply since the first rate rise on May 5.

Although the housing market is only three months into a decline, the national Home Value Index shows that the rate of decline is comparable with the onset of the global financial crisis (GFC) in 2008, and the sharp downswing of the early 1980s.

In Sydney, where the downturn has been particularly accelerated, we are seeing the sharpest value falls in almost 40 years.

Due to record high levels of debt, indebted households are more sensitive to higher interest rates, as well as the additional downside impact from very high inflation on balance sheets and sentiment. 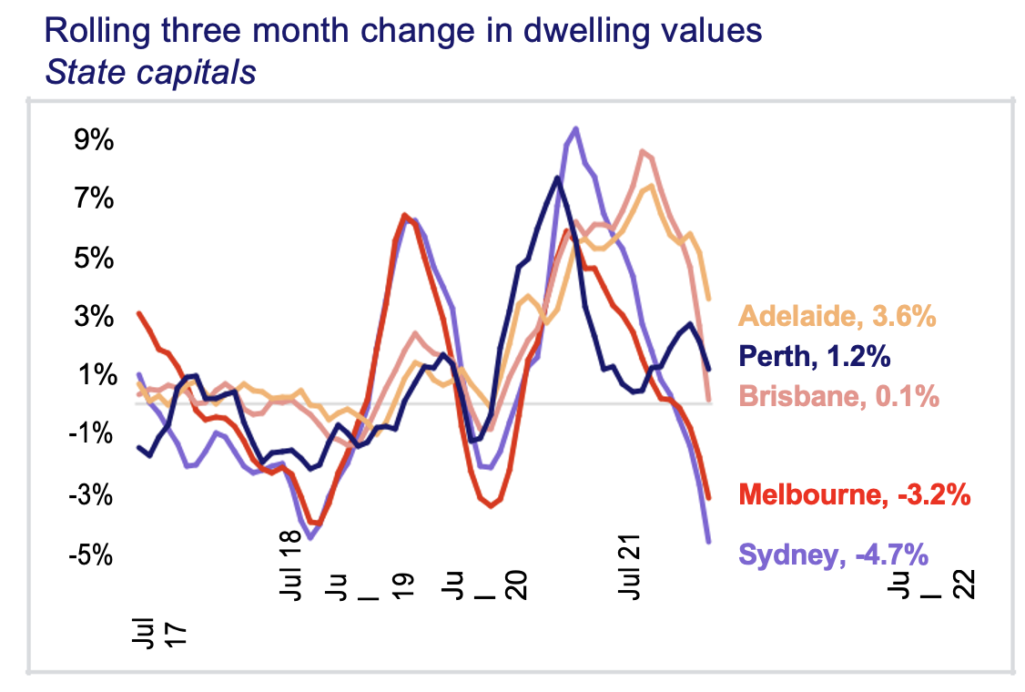 Dwelling values across CoreLogic’s combined regionals index were up 41.1% from the pandemic trough to the June peak, compared with a 25.5% rise across the combined capitals index.

The stronger growth reflects a significant demographic shift towards commutable regional markets, which is likely to have some permanency as more workers take advantage of formalised hybrid employment arrangements.

Most of the major regional centres adjacent to Sydney, Melbourne and Brisbane (including Geelong, Ballarat, Illawarra, Newcastle and Lake Macquarie, the Southern Highlands & Shoalhaven, the Gold Coast and Sunshine Coast) recorded a decline in home values over the three months to July, marking the end of nearly two years of significant capital gains. 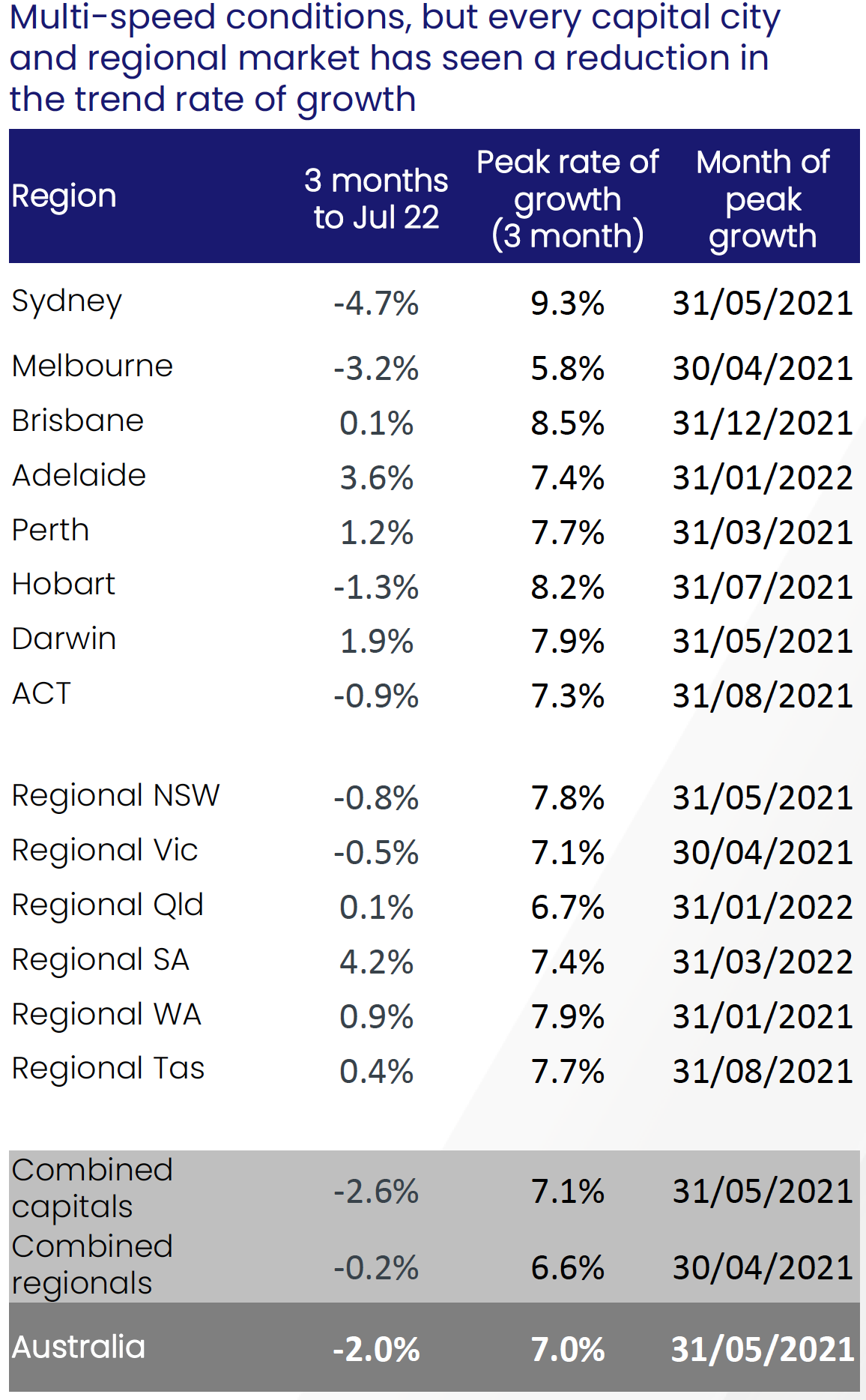 Unit values across the combined capitals are generally recording smaller falls relative to house values, down -1.0% and -1.5% in July respectively.

This trend is most apparent across the three largest capitals as well as Canberra, where housing affordability challenges may be deflecting more demand towards the medium to high density sector.

Additionally, firmer interest from investors should favour the unit market over houses where demand has historically been more concentrated. 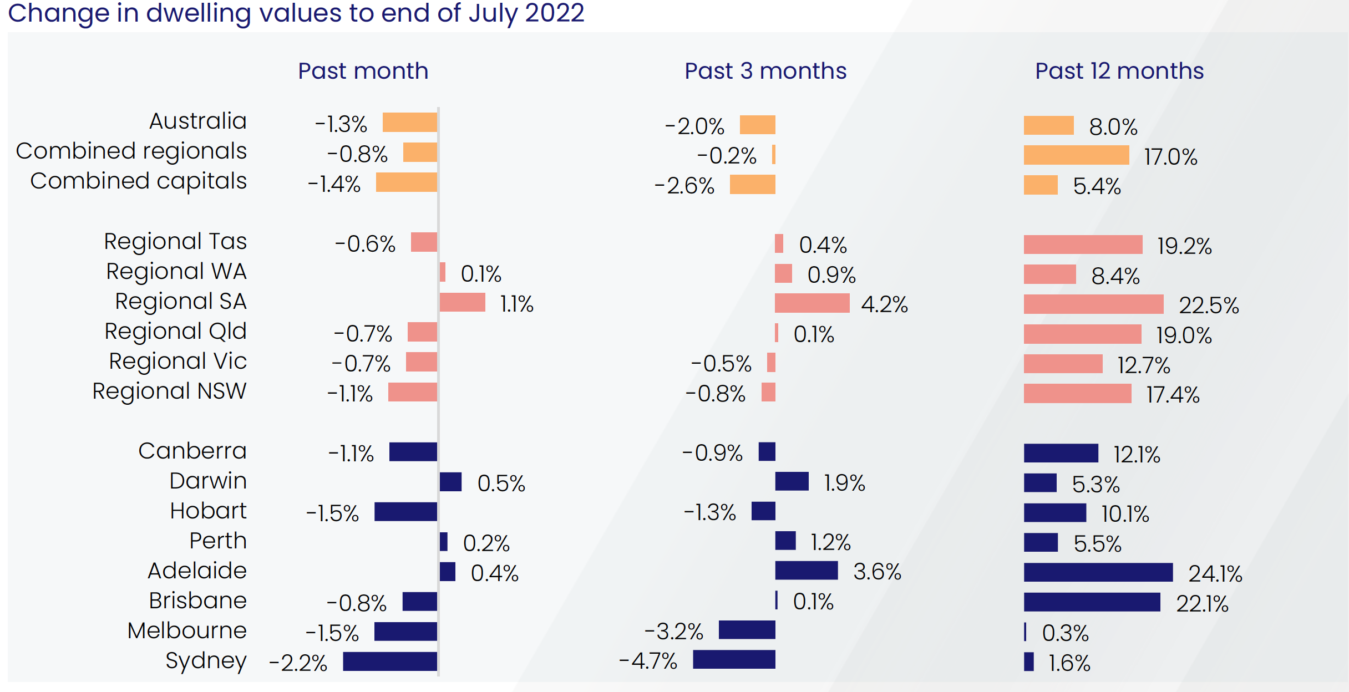 As we move through winter towards spring, we are likely to see more focus on advertised stock levels.

Although new listings are higher than at the same time last year and previous five-year average, the flow of freshly advertised stock has fallen -21.4% from the mid-March peak, helping to keep overall inventory levels low.

However, this dynamic is likely to change through spring as the trend in new listings ramps up at a time when demand is likely to be lower.

Based on the pre-COVID average, we have typically seen an 18.9% rise in the number of new listings between the winter and spring seasons.

A more substantial flow of advertised stock against a backdrop of falling demand is great news for active buyers, who will have more choice and less urgency, but bad news for vendors, who could find selling conditions become more challenging as advertised stock levels rise. 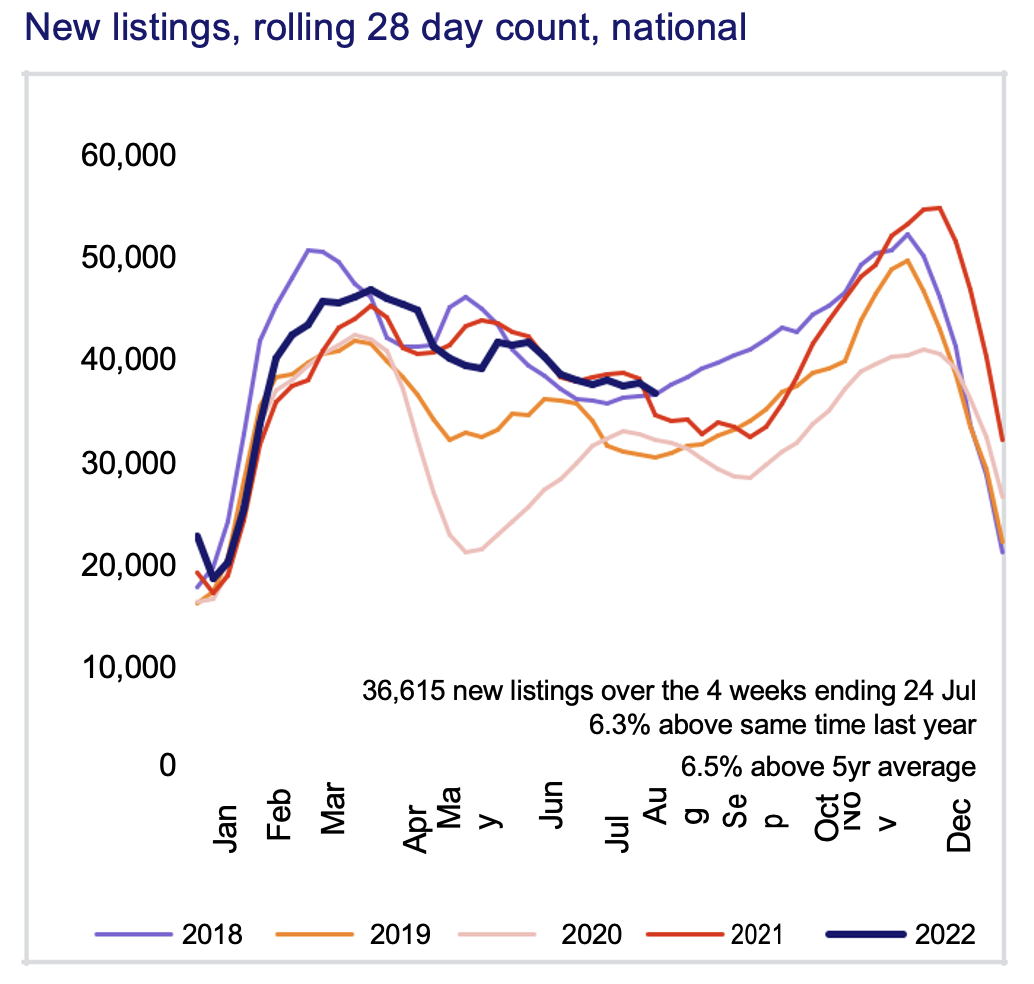 There are more properties on the market

In Sydney and Melbourne, total listings are already 8 to 10% above five-year averages, however Brisbane, Adelaide and Perth are recording advertised supply levels that are more than -30% below the five-year average, suggesting a faster rate of absorption through the growth cycle to-date.

On the demand side, CoreLogic’s estimate of sales activity over the three months to July was -16.0% lower relative to the same period in 2021.

The national figures are heavily impacted by an estimated -39.8% drop in sales across Sydney and a -26.3% fall in Melbourne sales, relative to the same period a year ago.

Stronger markets such as Adelaide and Perth have recorded a rise in activity, with the estimated volume of sales up 21.6% and 7.2% respectively.

It’s important to remember the context of these statistics.

While national home sales are falling from record highs, they are still 9.2% above the previous five-year average for this time of the year.

There is a good chance the number of properties sold in the second half of this year and into 2023 will continue to trend lower as higher interest rates, a more cautious lending environment and a reduction in household confidence continues to weigh on housing demand.

The trend in rising rents is evident across each of the capital city and broad rest of state markets, led by Brisbane with a 4.2% rental rise over the three months to July, to a 0.3% rise across Regional NT.

Rental markets are extremely tight, with vacancy rates around 1% or lower across many parts of Australia. 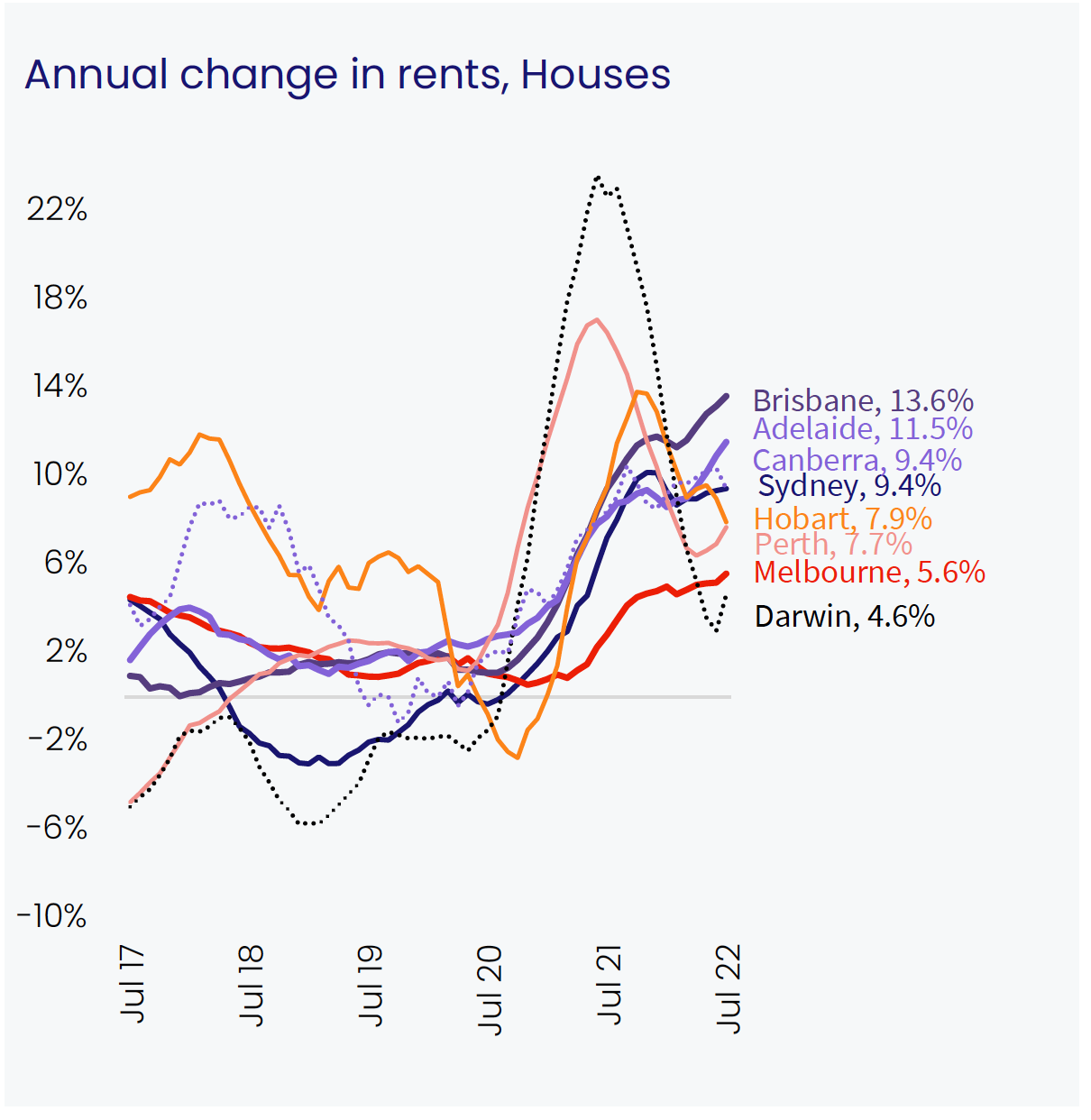 The number of rental listings available nationally has dropped by a third compared to the five -year average, with no signs of a lift in rental supply.

Such widespread and rapid rental growth is likely to remain one of the key domestic factors pushing up inflation, along with construction, food, transport and energy costs. 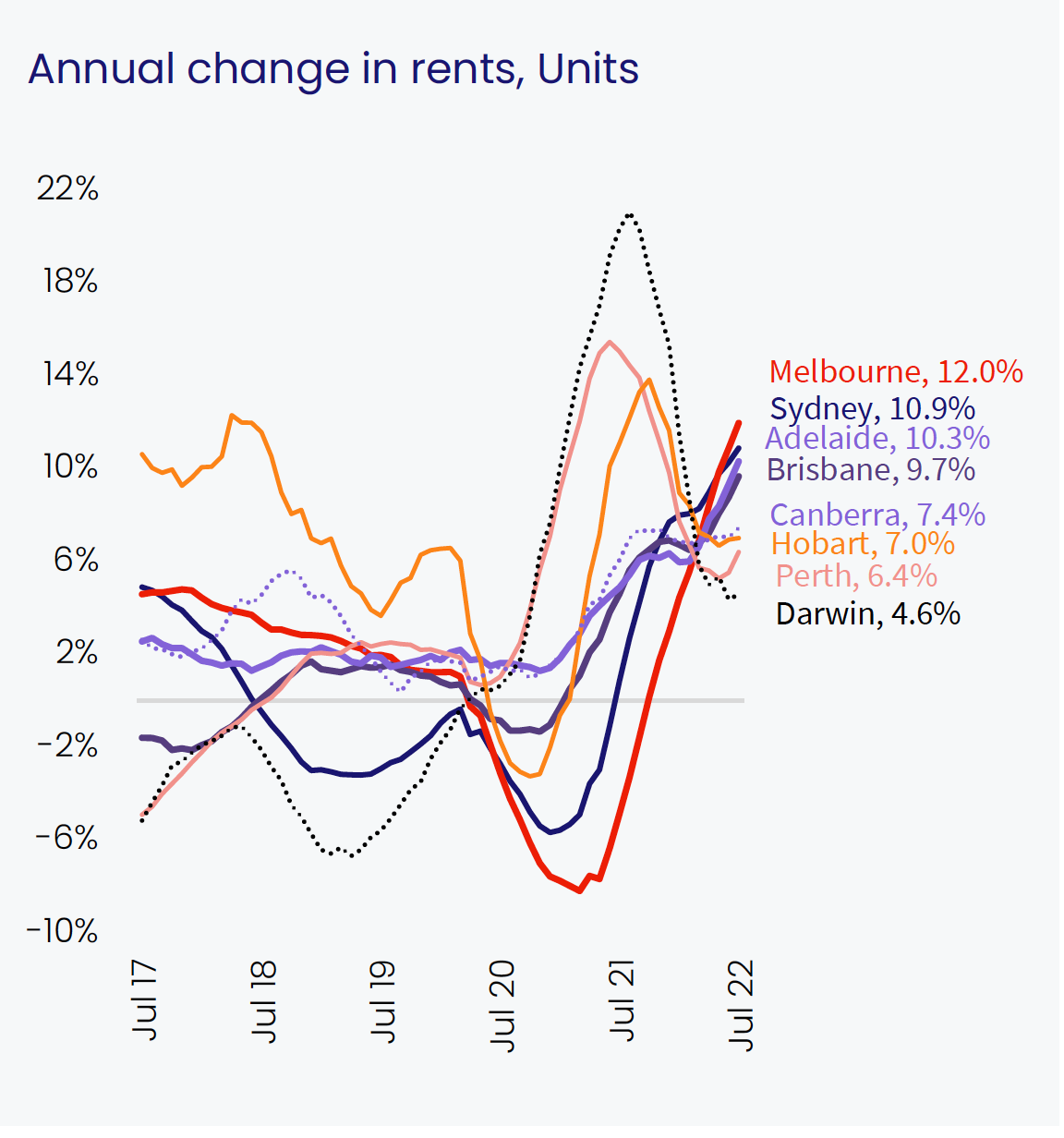 While some of these can be attributed to global supply chain issues, the rental situation is a domestic one caused by a combination of tight supply and amplified demand.

Logically, we will probably see a reversal of the pandemic trend towards smaller rental households as tenants look to maximise their occupancy and spread rental costs across a larger household.

To this end, rental values are rising fastest in the more affordable unit sector as tenants seek out cheaper rental options.

With rents rising faster than values, yields are consistently improving, albeit from record lows.

Across the combined capital cities, the gross yield has increased from a record low of 2.96% in February 2022 to 3.20% in July.

The most rapid yield recoveries have occurred across the Sydney and Melbourne unit markets, where gross yields have increased by 45 and 40 basis points respectively.

Such tight rental markets, improving yields and stronger buying conditions should help to keep a floor under investment demand. 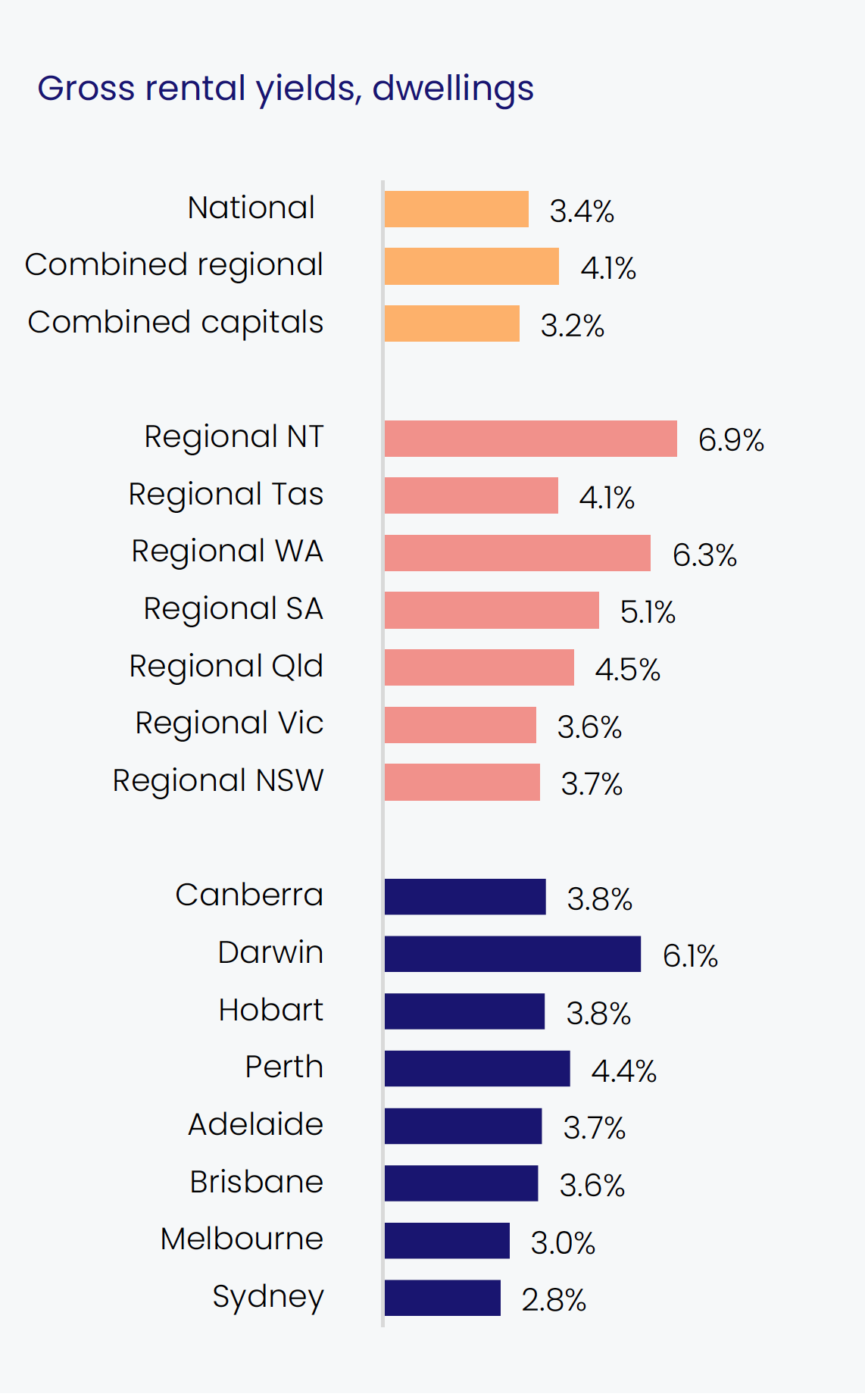 With forecasts for the cash rate ranging from the mid 2% to the early 3% range, even the best case interest rate scenario indicates that variable mortgage rates will roughly double from their current level.

As borrowing power is eroded by higher interest rates, and rising household expenses due to inflation, it’s reasonable to expect a further loss of momentum in housing demand.

On a more positive note, this interest rate hiking cycle may be short and sharp, with financial markets and some economic forecasters now factoring in interest rate cuts through the second half of next year.

When interest rates start to stabilise, or potentially reduce next year, this could be the cue for housing values to find a floor.

Similar to the trajectory of the upswing, this downswing phase could be a short but sharp one, depending on how high and fast interest rate settings go.

In the meantime, the housing market is set to face some near term challenges.

The spring listing season will test the depth of housing demand.

Historically the flow of new listings has surged through spring and early summer, typically reaching a peak in late November.

The rise in freshly advertised stock may not be met with a commensurate lift in buyer demand, resulting in higher levels of housing inventory.

By late spring or early summer, we could be seeing advertised stock levels trend higher than normal.

Vendors are likely to be more competitive across a smaller pool of active buyers, which would drive clearance rates lower across auction markets, and could result in longer selling times and larger discounting rates for private treaty sales.

Borrowers who locked into a fixed term mortgage rate through the pandemic growth cycle will be facing a significant refinancing burden next year.

RBA analysis is forecasting a surge in fixed loan expiries throughout the second half of next year.

Many of these borrowers could be moving from mortgage rates around the high 1% to low 2% range to a mortgage rate closer to 6% or higher.

The risk of a rise in distressed property sales due to debt servicing challenges is at least partially offset by extremely tight labour markets and high repayment buffers, in the form of savings and offset accounts, accumulated over the COVID period.

However, for mortgage holders in 2022, income growth has been a little more elusive than past periods of high inflation. Income growth will be an important factor in how well the housing market performs amid rate hikes.

ABS data shows the wage price index was up 2.4% in the year to March, below the series average growth of 3.0%, but growth is climbing from a low of 1.2% over the year to September 2020.

Additionally, ABS national accounts data shows that gross disposable household income growth has accelerated since 2021, and the RBA’s monetary policy statements reiterate that wages growth is on the way up.

For those households experiencing distress, if they have owned their property for more than a year, chances are they will have a reasonable level of equity accrued.

As housing values trend lower and incomes rise, we will also see a much needed improvement to housing accessibility.

Across most areas of Australia, the ratio of dwelling values to household income moved through record highs during the recent growth cycle, but this trend is now reversing in some markets as incomes rise and housing value growth moderates or falls.

We could see the housing affordability discussion evolve from one that has been focussed on accessibility to a discussion more focussed on serviceability.

With household debt already at record highs, prospective home buyers are likely to be cognisant of higher borrowing costs while lenders will probably remain cautious around high debt to income or low deposit borrowing.