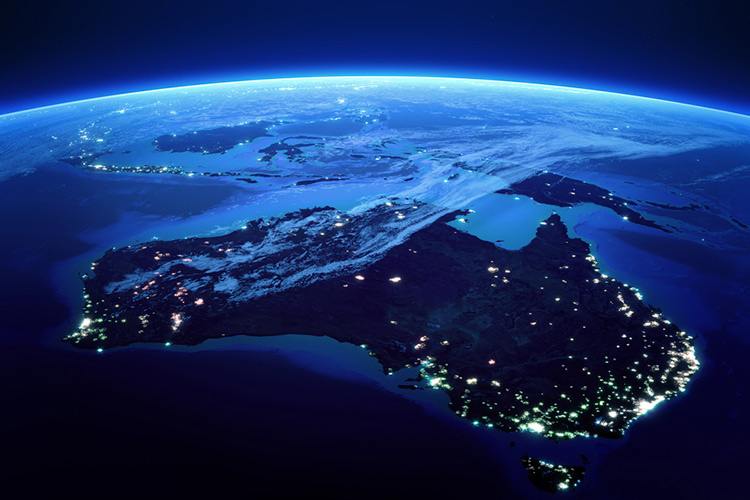 Guess how much all the land in Australia is worth?

How much is Australia's land worth?

The answer is about $5.8 trillion, according to the latest Australian Bureau of Statistics (ABS) figures for the 2017 financial year.

That's well over 3 times the level of Australia's GDP of around $1.7 trillion.

And, at just under $4.8 trillion, about 83 per cent of that dollar value related to land zoned for residential use (up from just 63 per cent in 1989, when the data series commences).

Of course, the ABS figures are quite rightly presented in current prices, and do not attempt to account for the twin impacts of inflation and Australia's significant population growth.

Nevertheless, the figures do show why individual or 'Mum and Dad' investors are drawn towards residential property over commercial investments.

Since the population is growing and everyone needs somewhere to live, there is more competition for residential land - especially in the big capital cities - and therefore values have risen over the long term. 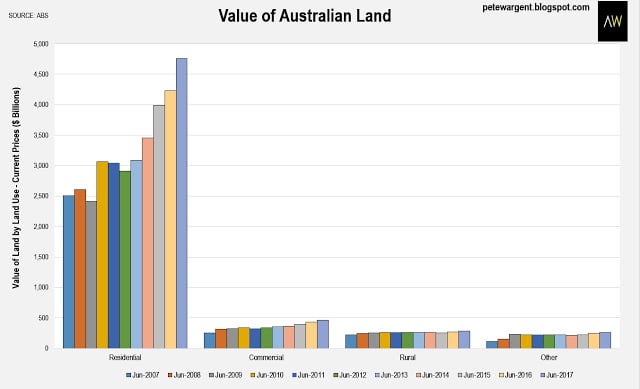 At the state level, the strong 5-year uplift in residential land values has mainly been driven by New South Wales and Victoria.

Again, these are also the states generating the bulk of economic activity and population growth, so that's to be expected to some extent.

But even accounting for population growth, the uplift in nominal land values was once again huge during the 2017 financial year, with total residential land values rising by about 16 per cent in each of the most populous states. 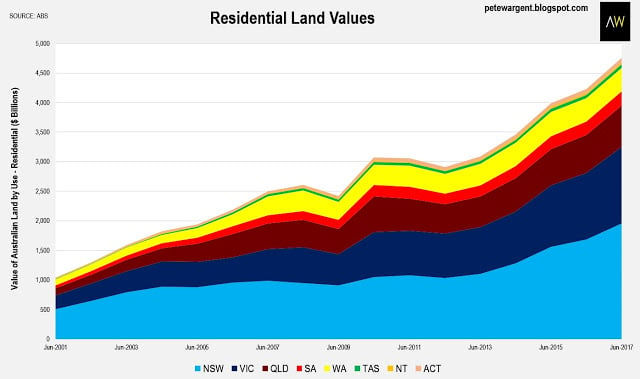 As you can see in the above chart, the value of land zoned for housing has all but increased by a lazy couple of trillion dollars through this cycle to date.

In Victoria the total value of residential land sits at about $1.3 trillion, and in New South Wales the figure is now approaching $2 trillion.

The total value of residential land in both states has comfortably more than doubled since 2009.

On the other hand, one jurisdiction has seen the total value of its residential land in decline since the 2014 financial year as the resources boom years faded: the Northern Territory.