What feels safe is often risky, and what feels risky is often safe

This statement contradicts just about every evolutionary instinct we possess.

We tend to seek out safety and avoid risk whenever possible.

A classic example has to be the instinct that (still) tells us we are safer staying with the group.

If members of the herd stray, they are easier for predators to pick off. 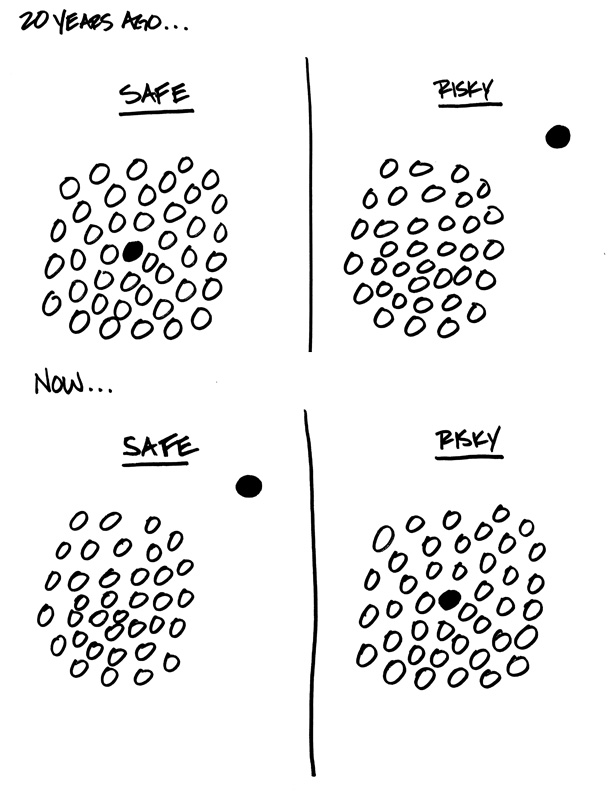 Staying with the group has proved the best way to survive.

For generations, this principle was true at work, too.

Many of our grandparents had one job for many years, retired with a pension and lived happily ever after.

In the span of only one generation, it seems that’s changed.

While it used to be safe being “a company man,” that is now often risky.

We’re now more familiar with the rise of what the author Daniel Pink described as a free-agent nation.

It’s incredibly hard for our brains to accept this change, but the group no longer offers us the same assurance of safety.

Sticking with the herd at work may, in fact, be the riskier choice.

Two of my favorite people, Krista Tippett, the host of the radio program On Being, and the author Seth Godin discussed what these changes look like.

The greater risk now may actually be not standing out from the crowd.

We’ve gone from applauding people for not causing trouble, as Mr. Godin describes it, to rewarding people who separate themselves from the group and cause a ruckus.

For instance, what used to be safe — betting on someone else to guarantee us a job — may be much riskier than we realized.

Things are changing so fast that we can’t always afford to keep our heads down at work.

We are required to be aware of, and understand, the need to adapt quickly as changes come.

We need to learn how to draw attention to ourselves in a good way.

It feels scary, but we’ll end up safer in the long run.

Something similar happens with spending money.

We look around, see what everyone else is buying, and confuse the herd with safety.

For example, simply because everyone else is using credit to buy the latest iPhone, or even bigger things like boats and cars, doesn’t mean it’s risk free.

But we start to tell ourselves the story that because everyone else is doing it, it must be O.K.

Also, we don’t want to stick out by being frugal. 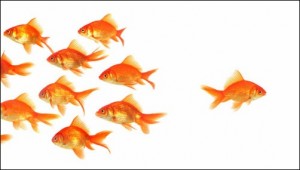 No one wants to be the person who says, “I can’t afford it,” when everyone else is buying.

In reality, safety comes from focusing on what we can actually afford versus what our neighbors think they can afford.

Finally, we get to perhaps the biggest safety-versus-risk conundrum: investing. Few decisions will feel riskier than making an investing choice that appears to contradict what everyone else is doing.

The herd was so confident that US housing prices would only keep going up, it seemed crazy not to buy that dream home.

Ironically, the very moment when it felt the safest, when everyone else was buying right at the top, was when it turned out to be the most dangerous. It demonstrates the fear and greed cycle perfectly. 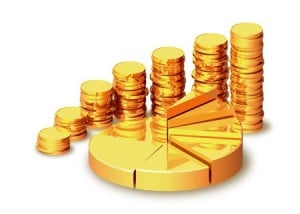 Doing so requires ignoring the herd and sticking out in a way that may feel wildly uncomfortable — at first.

But then the market adjusts, and suddenly all the people who chased each other into it are chasing each other back out.

Suddenly, sticking out doesn’t seem like such a bad idea. We can learn a lot by watching the people around us.

It’s how we evolved and reached the top of the food chain. But just maybe we should think very carefully about doing the same thing as everyone else.

Does it really keep us safer to stick with the herd, or are we risking everything by continuing to look at the world through an outdated lens?

This column originally appeared at the New York Times . Carl Richards blogs are published weekly in Property Update - Subscribe to my daily updates by clicking here to receive them.

at the moment normal ppl are buying yet many experts are predicting a bubble burst. So are the ppl the herd or is it experts?