Conflicting signals for the future of property

What's a head for our property markets?

When will the markets stabilise? How much longer will Sydney and Melbourne property prices fall?

That's what many economists and research houses are spending much of their time researching at present.

ANZ Bank recently reported to their wholesale and institutional clients that the signals are conflicting at present.

And the bank sees little reason for thinking the pace of house price declines will ease in the very near term, at least.

Here's a summary of the ANZ report: 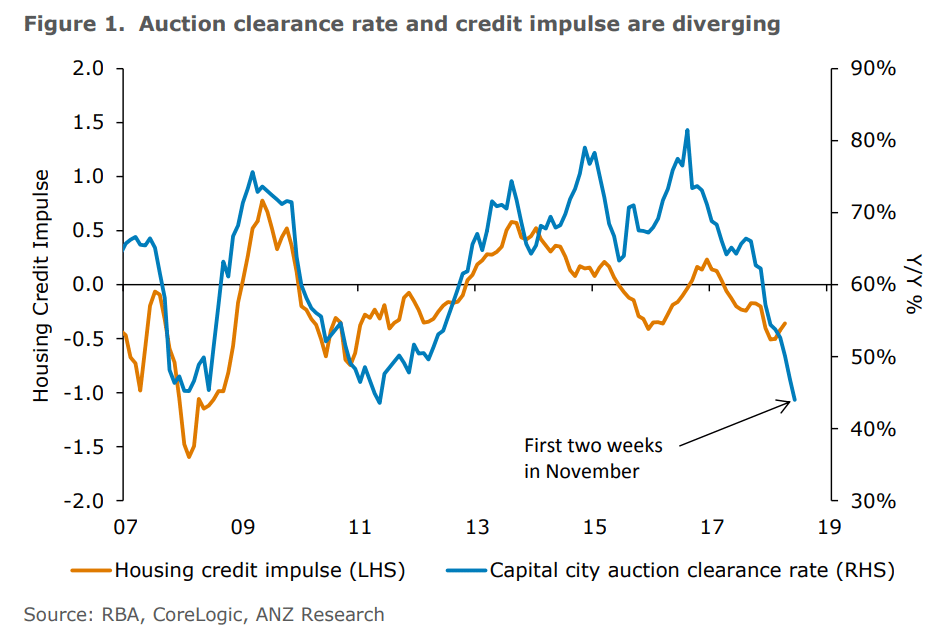 In trying to gauge the state of the housing market we pay attention to a number of indicators.

Among these, the auction clearance rate and credit impulse feature quite often in our analysis.

While they tend to be coincident rather than leading indicators of house prices (Figures 2 and 3), we look to these measures as confirmation of a continuation or change in trend.

As it so happens, the auction clearance rate and the credit impulse are diverging sharply (Figure 1).

This is not unprecedented, but the degree of divergence is particularly stark. 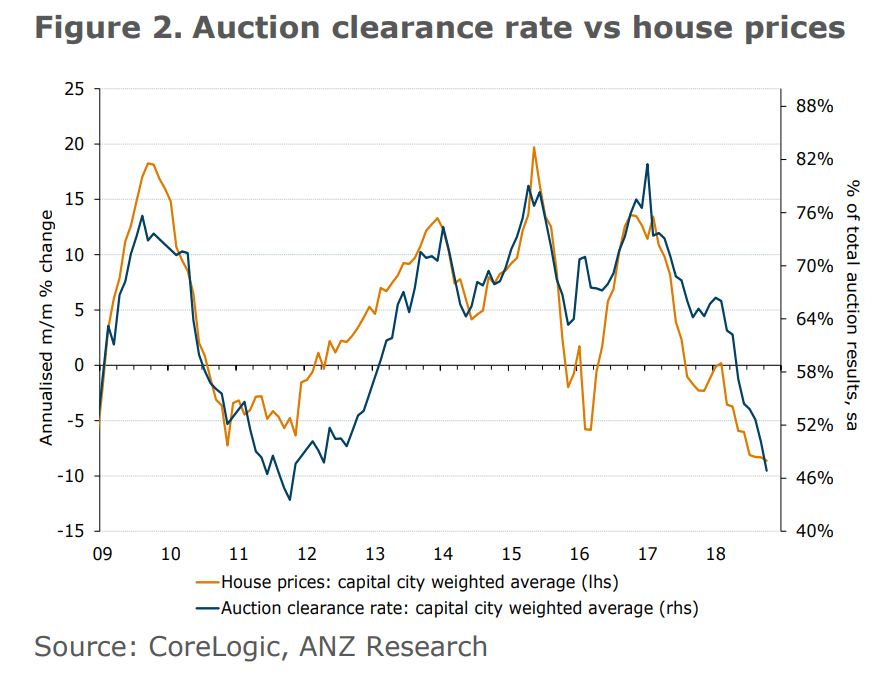 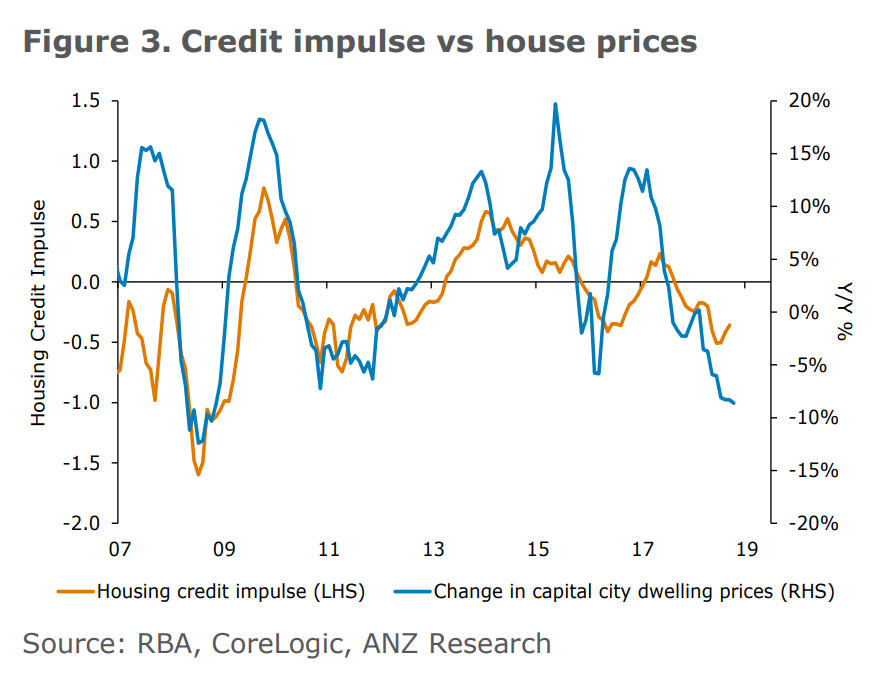 History suggests we should pay more attention to the still falling auction clearance rate than to the housing credit impulse which appears to be turning up.

When the two have diverged in the past, house prices have tracked the auction clearance rate rather than the credit impulse.

But we aren’t sure this will be the case in the current cycle. 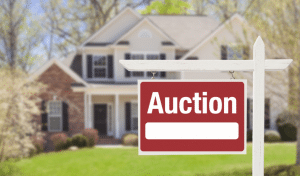 To be specific, we are wondering whether auctions make much sense as a way of taking a property to market when it takes an extended amount of time to secure mortgage finance.

If auctions lose favour as a means of transacting, then the information content in the auction clearance rate will diminish.

Perhaps it will be the case that continued weakness in the auction clearance rate will not be a sign of ongoing house price weakness.

But we are loath to take too much comfort from the small uptick in the credit impulse.

The weakness in housing finance approvals suggests this uptick won’t be sustained (Figure 4).

We see little basis for thinking the pace of house price declines will ease in the very near term, at least. 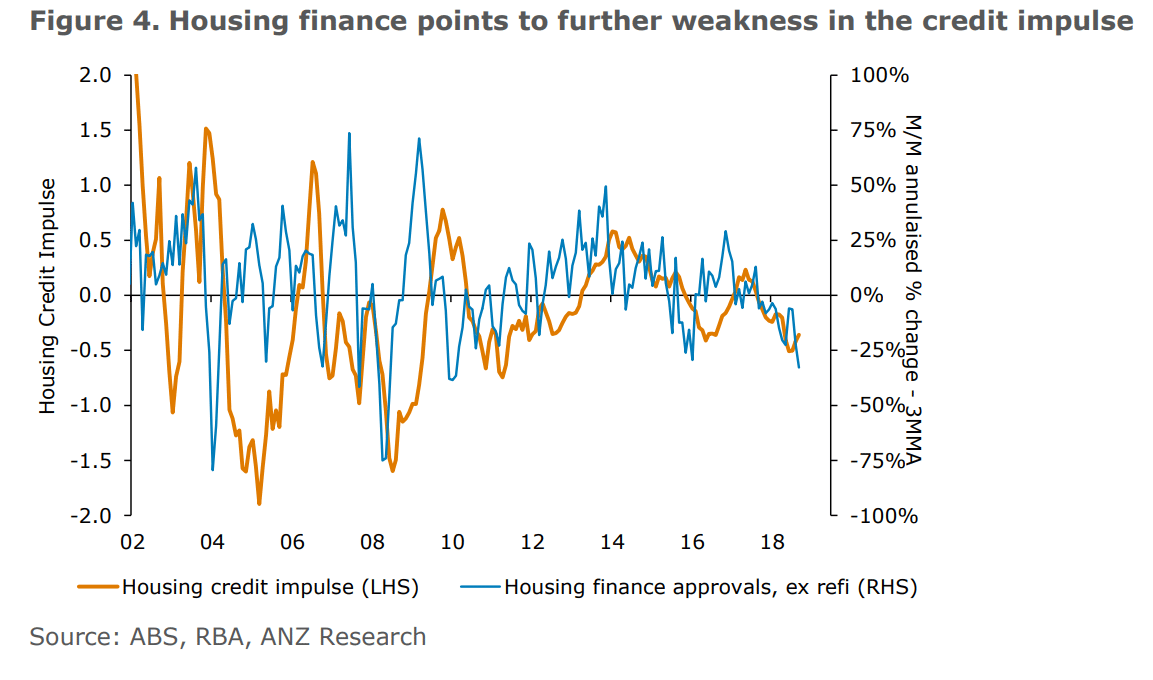