Such a huge volume of garbage is being written, filmed, podcasted, Facebooked, and blogged about about mortgage stress right now that it’s nigh on impossible to keep up!

No fewer than one million looming defaults I saw on TV this week!

And as always just a year away, I’m sure.

One of the biggest stresses right now from my perspective is trawling through all the tripe.

Clearly time for a social media hiatus for me, I think! (apologies I meant to say ‘shedloads’, by the way, darned autocorrect lol).

The most important metric to watch as ever is the health of the labour market, with jobs growth still firing along and the unemployment rate continuing to decline to the lowest level since 2012, with further improvements expected over the next year or two.

So that’s the good news.

The latest ‘flavour of the month’ – and as I’m sure you’ve noticed over the past 15 years there’s always a flavour of the month – is the reset of Australia’s interest-only (IO) mortgages, an issue I wrote a detailed report on last year. 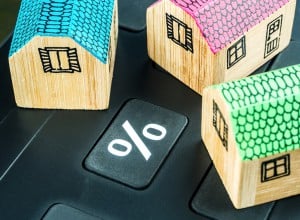 Things have panned out a little differently in terms of timing than might have been expected at that time.

One interesting thing of note is that with much lower interest rates now available on principal-and-interest loans there has already been a significant voluntary swing towards the repayment of debt, and ahead of schedule in many cases.

In fact by the end of March 2018 the share of outstanding IO loans by value had already dropped quite close to 30 per cent.

Given that it’s now nearly August (where has this year gone, eh?) based upon the present trajectory it appears likely that the share of IO loans is now well below the average levels seen over the past decade. 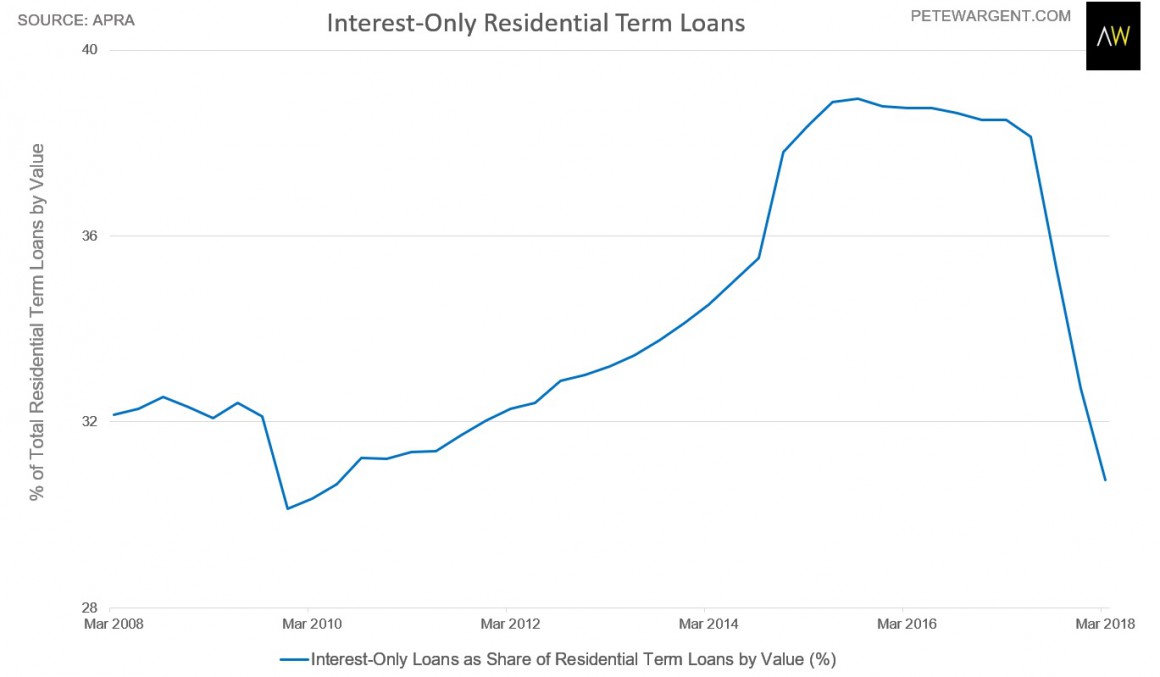 Of course, some borrowers may not be able to roll over existing IO loans under the new tighter lending standards.

And, yes, some borrowers may even be forced to sell a property (although lenders aren’t incentivised in any way to send borrowers to the wall), while higher repayments are sucking some of the energy out of the housing market and the wider consumer economy.

This is old ground, of course, well covered previously in speeches by the Reserve Bank of Australia and APRA.

The big picture is that 30-plus day mortgage arrears rates are tracking at about 1 per cent in New South Wales, and about 1.2 per cent in Victoria.

After around half a decade of recessionary conditions following the resources downturn Western Australia has an arrears rate running at about 2.7 per cent, and the Northern Territory about 2.8 per cent.

Another interesting metric to follow is personal insolvency activity as reported by AFSA. 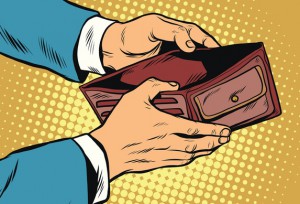 Bankruptcies have fallen sharply over the past decade, broadly as expected after the financial crisis.

Total personal insolvency activity did show a meaningful year-on-year increase of 5.6 per cent over the 2018 financial year.

This was mostly driven by Western Australia as shown in the graphic below (you can click on it to expand).

Note that the population of Australia has also increased strongly by about 4 million over the past decade, so in absolute terms a rise in total activity shouldn’t be entirely unexpected. 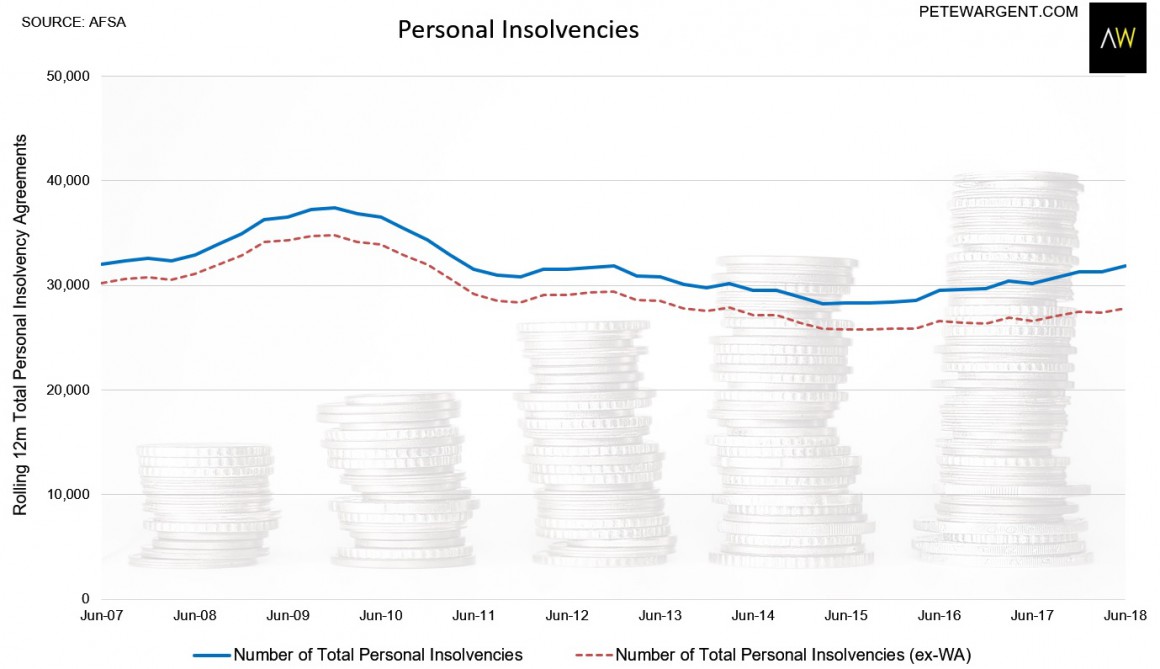 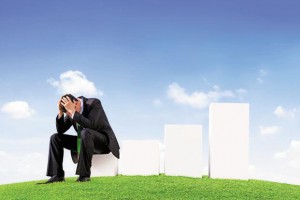 After all, the estimated resident population is at all-time highs too, being about to tick past 25 million within the next few weeks.

Looking instead at a more sensible personal insolvency rate per 1,000 heads of population shows that Western Australia has recorded the sharpest increase since 2013. 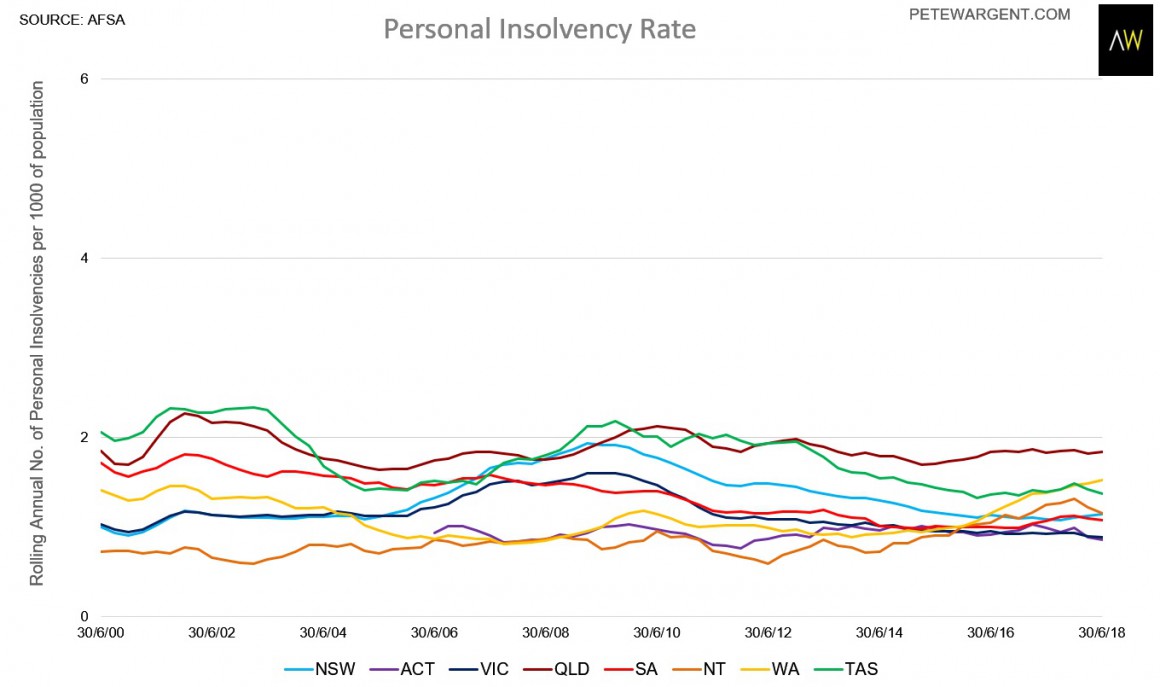 Queensland typically records the highest levels of insolvency per capita, in part due to the severity of its tropical climate, including regular Cyclones, flooding, drought, and some other weird biblical stuff.

There are also elevated levels of mortgage arrears apparent in Gladstone and some parts of Central Queensland heavily influenced by the resources sector, which is not unexpected given the magnitude of dwelling price declines.

Personally, I can’t say I’m all that worried about the medium term impacts on the housing market of tighter lending standards, interest-only loans, higher mortgage rates, or whatever else is supposedly going to cause a huge crash.

But let’s suppose I’m totally wrong – always possible! – and for some reason the housing market collapses into the assumed horrible cascade of defaults.

What happens then if we sink into a dire recession? 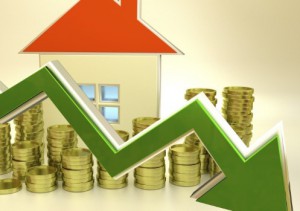 Well, nobody knows for sure, but I’ve run through some scenarios with people far more intelligent than me both in Australia and overseas, and here’s what they think:

So there are two dynamics that present a different range of scenarios from Spain or Ireland (don’t ask – it’s always supposed to be Spain and Ireland).

And thirdly, the government has any number of levers it can pull to stimulate housing market activity, including grants for homebuyers, incentives for downsizers, stamp duty discounts, relaxing foreign buyer rules, and so on.

Yes, granted, there are some possible scenarios where interest rates go higher for different reasons.

Some people don’t like to hear this line of thought which includes government stimulus, preferring to argue that housing should be allowed to become cheaper.

This sounds good on paper, and I don’t necessarily disagree in theory, but in reality it’s not a route that governments like to go down voluntarily.

For these reasons policy is more likely to be directed at encouraging demand with first homebuyer incentives and pushing for higher household incomes to improve affordability.

Not that affordability is a pressing issue in many areas outside the two largest capitals, and certainly not in the doomsday housing market scenarios now being reported on a daily basis.

When the interest-only reset issue passes, it’ll be on to the next big thing, no doubt.

'Will mortgage stress cause a property market meltdown' have no comments