The housing market transitions from one in which values are growing to one where values are declining.

With dwelling values now falling, led by a rapid slowdown in the Sydney and Melbourne housing markets, these two cities have also experienced a lift in listings of properties for sale.

In most other cities the number of properties for sale has been relatively steady while Hobart has experienced a substantial fall in stock for sale over the past year.

We have only looked at suburbs with at least 50 listings in each period.

The major regional town of Katherine in the NT has experienced the greatest increase in properties listed for sale over the year (97.8%).

The mining town of Clermont in Qld has seen the second largest increase with listings 80.3% higher.

The first table shows the top 5 for each state and territory, despite listings trending lower in regional markets, suburbs located outside of the capital cities dominate the list making up 25 of the 40 suburbs listed.

Despite the mining downturn having been in place for a number of years the list of suburbs in Qld and SA is dominated by mining regions.

Suggesting, suggesting owners may be more willing to sell as conditions level out or more distressed assets are hitting the market.

NSW shows a dominance of Sydney suburbs while in Victoria the list completely consists of regional suburbs, as does the WA list.

Only one of the suburbs listed for Tas has more properties advertised for sale than they had a year ago which highlights the tightness of stock for sale across the state. 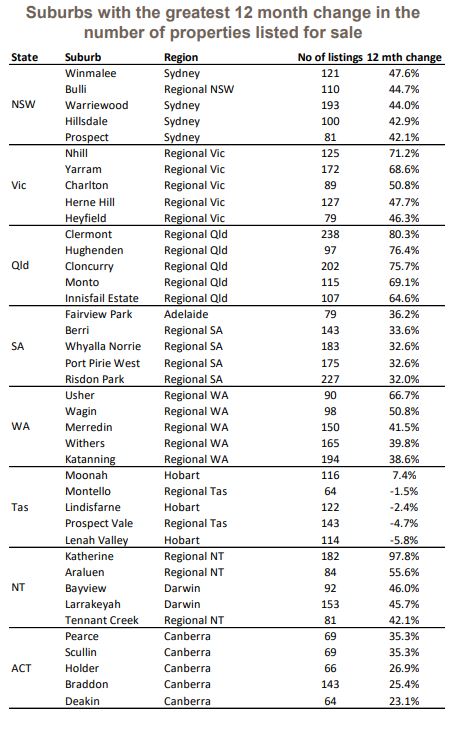 Although regional areas are typically seeing larger declines in stock for sale than capital cities, capital cities account for 25 of the 40 suburbs listed in which property listings have fallen the most over the year.

Although this is the case, Tallwoods Village in regional NSW has seen the greatest fall in listings over the year, down -61.3%.

In NSW, regional areas have typically seen the greatest fall in listings.

Given that listings are substantially higher than they were a year ago this is unsurprising. 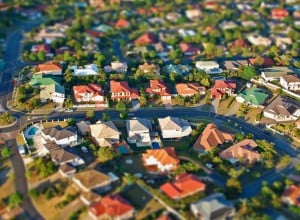 For Victoria, Hadfield is the only capital city suburb listed with regional areas dominant.

This is reflective of the much stronger value growth being experienced in regional markets.

In all other states and territories except Tasmania the capital city markets dominate the list.

In Tasmania, the volume of listings has tightened throughout the state.

Overall as the housing market is slowing, the number of properties for sale is climbing in Sydney and Melbourne, providing for less urgency amongst buyers and more time to negotiate. 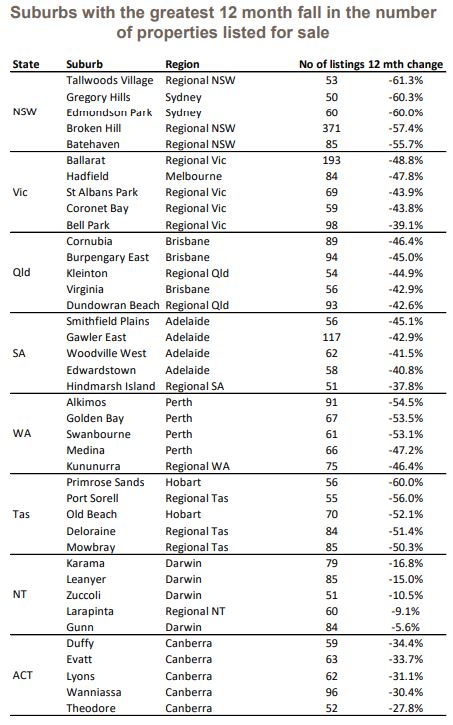 As stock levels rise, buyers become more empowered and vendors may need to rethink their pricing expectations and marketing strategies.

Elsewhere stock levels are tightening and we would expect these trends to continue.

'Which areas made the property list?' have no comments