In amongst changing Prime Ministers (again) or our ongoing obsession with all things Trump, there mustn’t have been much room left in the media this year for analysis of interesting jobs forecasts and other economic news. 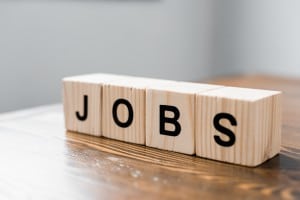 This one missed my attention, but it’s very interesting: the Federal Government’s Department of Jobs and Small Business earlier this year released its employment projections by region and industry to 2023 compared with 2018.

You can download the spreadsheets and supporting data here but below is a summary without getting too deep into the numbers.

Remember, these are just long term forecasts and like all long term economic forecasts, they have a few more things in common with the astrology pages than they might like to admit.

They are built on assumptions that can change, and politics is one area likely to have some impact on the numbers in the future.

More on that later.

The forecasts are available at what is called SA4 level, which allows us to compare inner city regions, with a broader metro region, and the state as a whole.

It takes in leafy low density suburbs to the north and west and probably overstates the definition of what “inner city Brisbane” means to most people when it comes to CBD and fringe, and exaggerates the inner city numbers somewhat. 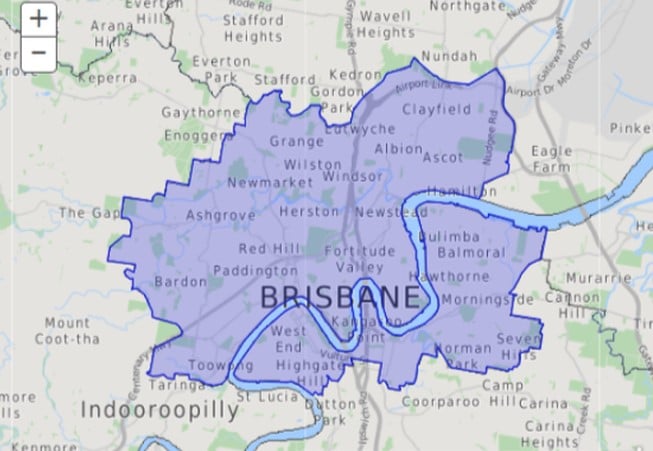 Sydney by contrast is arguably undercooked.

The definition of inner city does not include high density commercial areas like North Sydney or the inner west.

So this boundary definition might understate the jobs contained in what most people might call “inner city Sydney.” 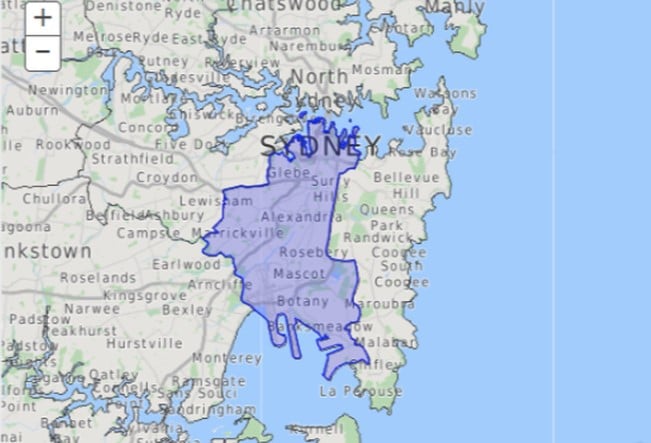 Melbourne is, like Brisbane, quite generous with its definition of “inner city” at the SA4 level.

Keep this in mind when looking at the numbers. 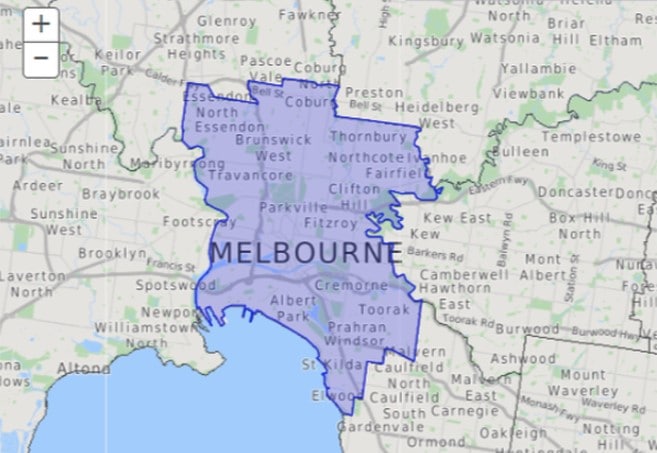 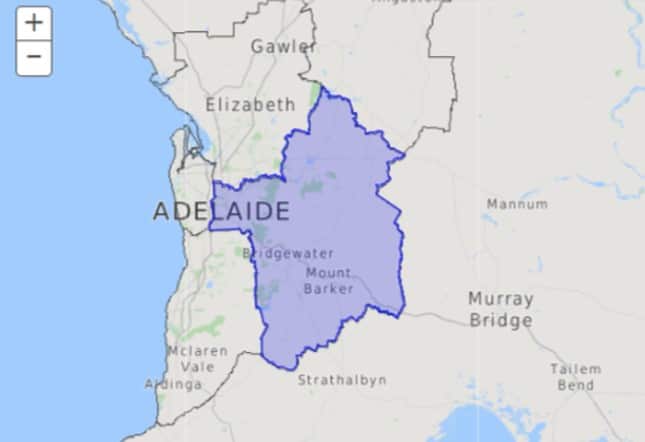 As is Perth’s boundary, which stretches from Cottesloe to the CBD and beyond. 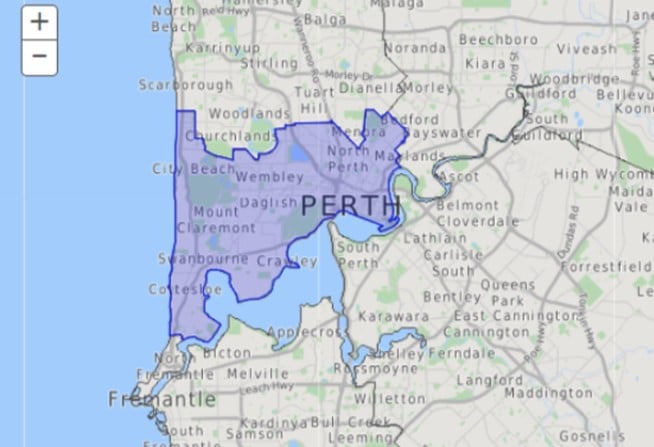 The graph below shows the spread of existing job numbers by state, major metro region and inner city.

Some things stand out: 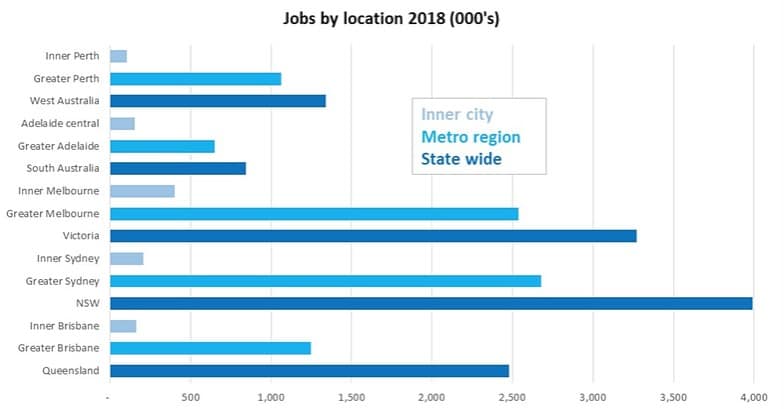 Where the jobs will grow the most by 2023

The next graph shows where the Federal Government boffins expect jobs to grow the most. Once again, the future domination of NSW and Victoria on the national scene is apparent, as is the dominance of their greater metro regions of Sydney and Melbourne. Here are some problems I’d suggest for this:

The graph below summarises this.

Likewise, inner Sydney will increase its share of greater Sydney jobs from 8% to 12% in that period, with increases also predicted across the board for other centres. 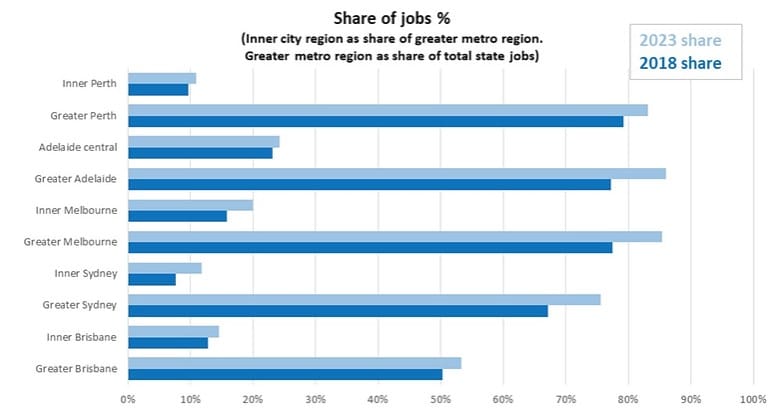 I suspect this is a blanket assumption about jobs centralization and I also suspect it won’t eventuate.

Political strategies aside, there is increasing evidence that employment dispersal – driven by the changing nature of growth industries and where they need to be located – is going to transform urban economies in the future.

It has been fashionable to talk about the clustering of growth industries and so-called knowledge workers in city cores, but the evidence from our Census and the evidence from overseas is increasingly pointing to a different pattern of growth, occurring organically in suburban business districts in metro regions.

This last graph looks at Queensland, my home state.

A more decentralized economy than NSW or Victoria, it is also likely to be subject to different economic forces in the future, if the forecasts are correct.

The predictions are that Ipswich to Brisbane’s west will lead job growth in the 2018-2023 period, followed closely by the Gold Coast, Brisbane South, then the Sunshine Coast, then the inner city and then Toowoomba.

Seven of the top 10 growth regions will be outside the greater Brisbane area. 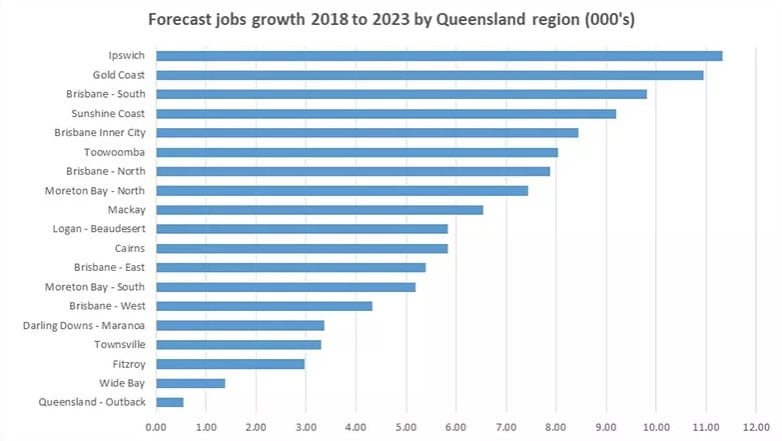 Understanding what drives jobs growth and where this is likely to happen is essential to economics, demography, settlement strategy and efficient planning.

The figures released by the Federal Government show an economy increasingly reliant on jobs growth in two major cities, but not in the city centres of those cities.

The figures endorse the need for urban infrastructure policies that provide equal priority to the infrastructure needs and placemaking enhancements of suburban centres, just as they have done for city centres in the past.

This is just common sense.

The figures also underline the importance of looking into ways of sharing future jobs growth opportunities around the nation more equitably.

If we don’t, we will increasingly see population and infrastructure pressure focused on just two cities, and a national economy increasingly exposed to their economic fortunes.

Surely we can do better than this?

My suggestion is to explore ways of enhancing the appeal of outer suburban and regional centres as places for business.

Improved transport, attractive taxes, quality affordable housing, schools, hospitals and so on are important for workers and for employers alike.

No one – employee or employer – will want to set up shop in a place that resembles Australia’s equivalent of a third world centre.

A national program of meaningful and strategic regional and suburban renewal would be a step in the right direction to restoring the attractiveness and competitiveness of these alternatives.