What will the impact of COVID-19 be on population growth and change in Australia? 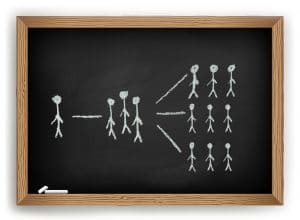 In May I wrote this blog which argued that the biggest impact would be on the volume of net overseas migration (NOM), but the scale of the impact would depend on how long travel restrictions and the border closure were enforced.

The recent spike in COVID-19 cases in Victoria just shows how precarious the situation is, with restrictions likely to remain in place for some time.

This blog progresses the themes I presented in the previous blog, but looks specifically at international students and their contribution to population growth and change in Sydney and Melbourne.

In 2018-19 education was the largest service export industry, worth $37.6bn to the Australian economy.

Its export income has doubled in the last ten years.

If they reside in Australia for 12 months in a 16 month period, they are counted in the official population estimates (ERP).

In 2019, there were more than 950,000 international student enrolments in Australia across the education sector.

This includes universities, TAFEs and a range of other providers.

Chinese students comprised about one-quarter of the total number, but almost one-half of enrolments in higher education.

This blog uses 2016 Census data to analyse the spatial distribution of international students.

It’s not a perfect way to identify this population – ideally a centralised enrolment system with address details would facilitate this – but a proxy measure can be obtained. 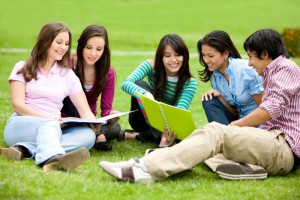 Census data enables a tabulation showing people born overseas who arrived in Australia in 2016, by whether or not they are attending an educational institution.

For the purposes of this blog, I restricted this to universities and TAFEs.

This method produces a total of approximately 15,500 international students in Greater Sydney, and a further 16,700 in Greater Melbourne.

This is clearly not the total number of international students, but there is still enough data to enable spatial analysis to be conducted.

The maps below show the residential location of international students in Sydney and Melbourne by SA2.

The dots represent the location of university and TAFE campuses.

There is a distinct spatial pattern to the residential location of international students in both cities. 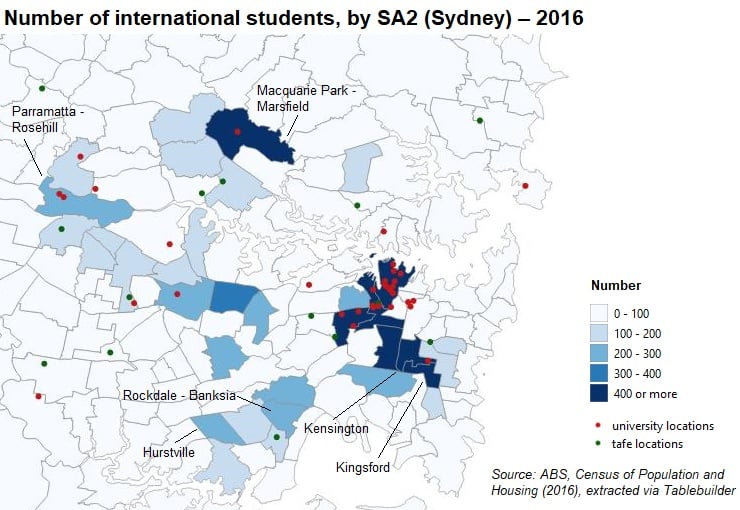 In Sydney, international students are highly concentrated in the inner city and surrounds.

This corresponds to the location of the main campuses of the Universities of Sydney and New South Wales and the University of Technology Sydney.

The SA2 of Kingsford, located to the south of UNSW, has the highest number of international students (876).

This is a popular area for student rentals, including purpose built student accommodation facilities, and there have also been a number of high-rise apartments constructed in recent years. 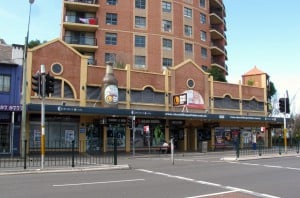 These are particularly popular with students from China.

Other SA2s with a high number of international students include Pyrmont – Ultimo (856), Kensington (780), and Sydney City and Inner South (685).

The other major cluster of international students is the SA2 of Macquarie Park – Marsfield (567 students), where Macquarie University is located.

There are also smaller clusters around Parramatta (University of Western Sydney) and the Hurstville/Rockdale area.

A reduction in the number of international students would obviously impact these SA2s the most.

From an LGA perspective, they include Sydney, Randwick and Ryde.

For example, ABS data shows that in 2018-19 population growth in the City of Sydney was basically driven by NOM (net internal migration loss was greater than the gains through natural increase).

A reduction in the number of international students will therefore clearly impact population growth in 2019-20 and beyond. 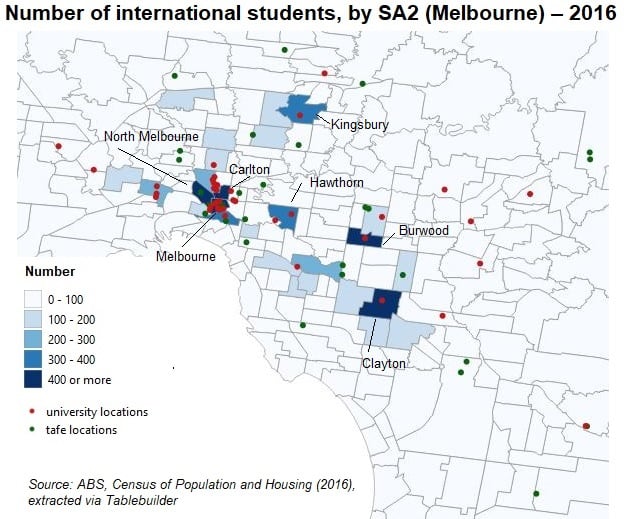 The spatial pattern is similar in Melbourne.

The SA2s with the highest number of overseas students are concentrated in the inner city, specifically Melbourne (1,989) and Carlton (1,729).

There are several university campuses located here, most notably the University of Melbourne and RMIT University. 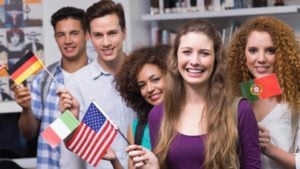 Along with the SA2 of North Melbourne (705), this cluster accounts for over a quarter of international students living in Greater Melbourne.

Clearly, a decline in the number of international students will impact these SA2s the most.

Furthermore, they are all located in the City of Melbourne, which, similar to the City of Sydney, grows primarily through NOM.

Other notable clusters are in the eastern and south-eastern suburbs.

The SA2 of Clayton, where Monash University is located, is home to 1,509 international students.

The LGAs of Monash, and to a lesser extent Whitehorse, Darebin and Boroondara, will be impacted by lower numbers of international students while border restrictions are in place.

How does this influence population change?

The expected reduction in NOM this year as a result of the closure of the Australian border will have a significant impact on population growth. 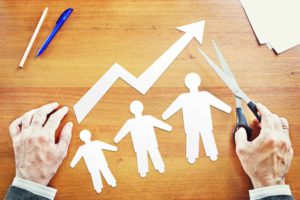 The 2019-20 figures will be confirmed by ABS data releases in December, and localised population estimates will follow in March 2021.

The Treasury estimate for 2020-21 assumes a gradual opening of the border from the beginning of 2021.

In 2020, many international students arrived in Australia prior to the border closure.

However there were already restrictions pertaining to arrivals from China from early February.

Provisional data released by the ABS in the last few months indicates that student departures are far exceeding the number of arrivals.

In the three months ended June 2020 there were just 130 student visa arrivals in Australia compared to 23,820 departures.

This suggests that many students may have decided to return home in the wake of the pandemic, move to online learning where available, or defer their studies.

Importantly, despite recent announcements by the Australian government to support the international student sector, these students are unlikely to be allowed back into Australia until border restrictions are lifted. 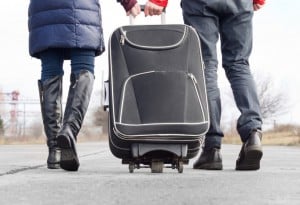 This raises a number of issues, such as the potential for the 2021 academic year to be affected, and the possibility that some international students may abandon their Australian studies altogether.

A decline in the number of international students has other impacts.

Already there have been reports of higher rental vacancy rates in Sydney and Melbourne, an early indication of the impact of the loss of the international student market and potential impact on residential dwelling construction.

There are also spin-off effects on other parts of the economy.

Job losses, such as those recently announced by the University of New South Wales, are an example.

Population estimates in SA2s were international students live in larger numbers are likely to record a far lower volume of population growth in 2019-2020 (and possibly beyond) due to the closure of Australia’s borders to non-citizens.

This blog has used 2016 Census data to provide an indication of the spatial distribution of international students in Sydney and Melbourne.

It confirms that international students are most likely to live in and around major university campuses.

The LGAs of Sydney and Melbourne will be impacted the most as not only are they home to large numbers of international students, but population change in these areas are driven overwhelmingly by NOM.

'Where do international students live?' have no comments