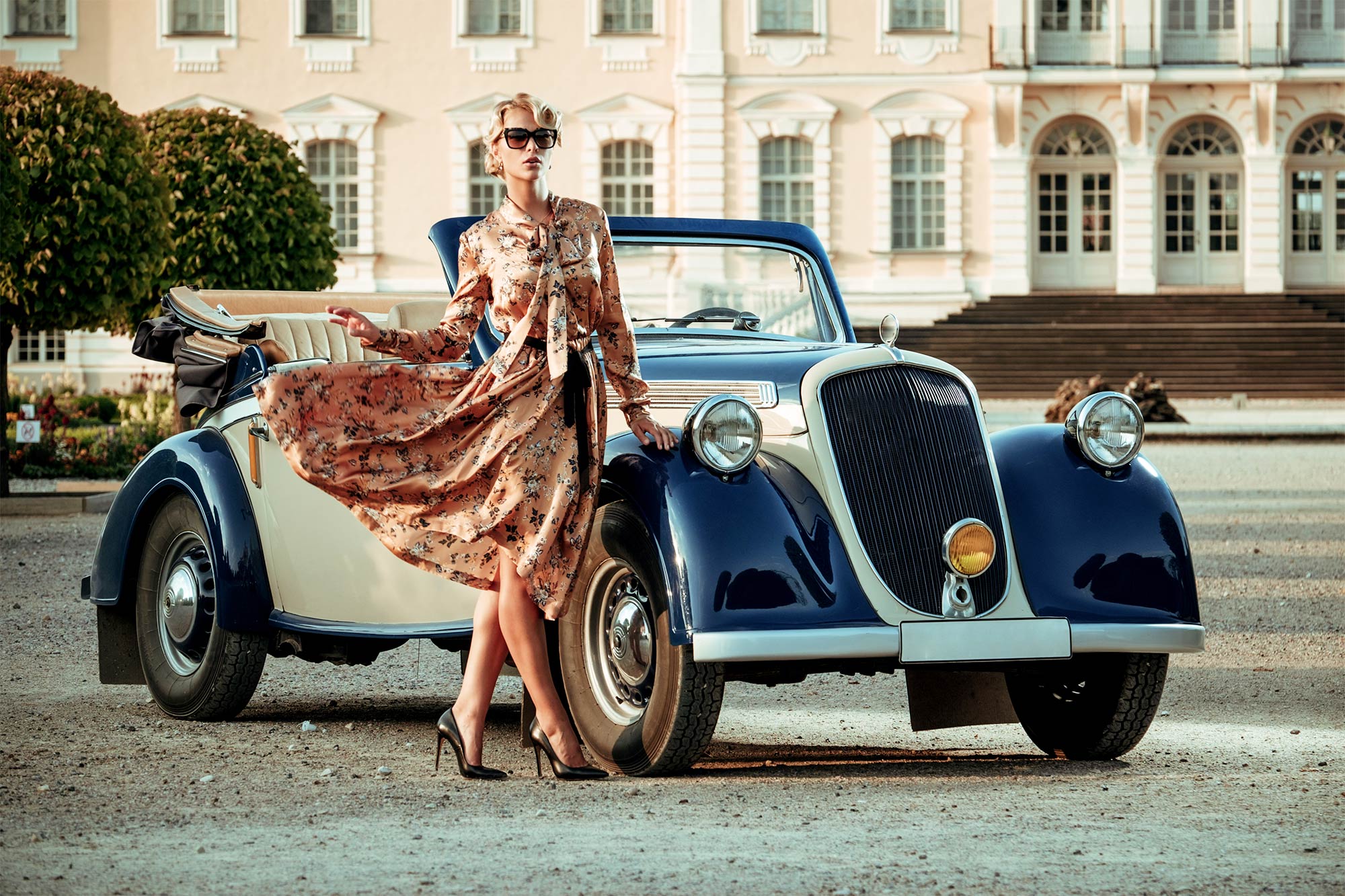 There signs emerging that Aussie consumers are now preferring to spend their money on other things rather than cars and homes.

Earlier this year  a report published by CommSec, noted the slowdowns at the 'top end' of the housing and new vehicle markets.

And the slowdown has continued since.

This is insightful because in the past, it has been notable that the ‘top end’ of the housing and car markets have led movements in the broader market, and it looks like the same trend is occurring now. 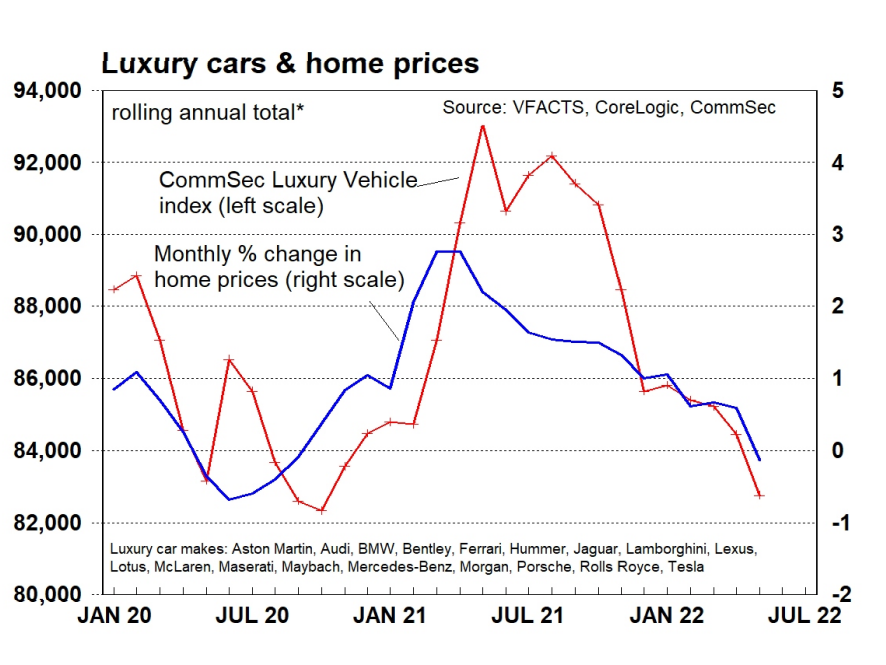 Annual sales are down 11.1 per cent, the biggest fall in almost three years.

Similarly, according to CoreLogic's data, national home prices fell by 0.1 per cent in May, the first fall in 20 months.

Home prices fell 0.8 per cent at the ‘top end’ but prices rose 1.0 per cent for lower-valued properties.

In the past, the ‘top end’ of the housing and car markets has led to changes in the broader housing and new vehicle markets.

However, a tight job market – more jobs and higher wages – will provide support for housing demand, and therefore prices.

Sydney and Melbourne are expected to lead the falls in 2022 with Adelaide and Brisbane down the most in 2023 home prices.

However, the car market could provide different results in the coming months.

In the past, falls in luxury vehicle sales have led to changes in the broader market. 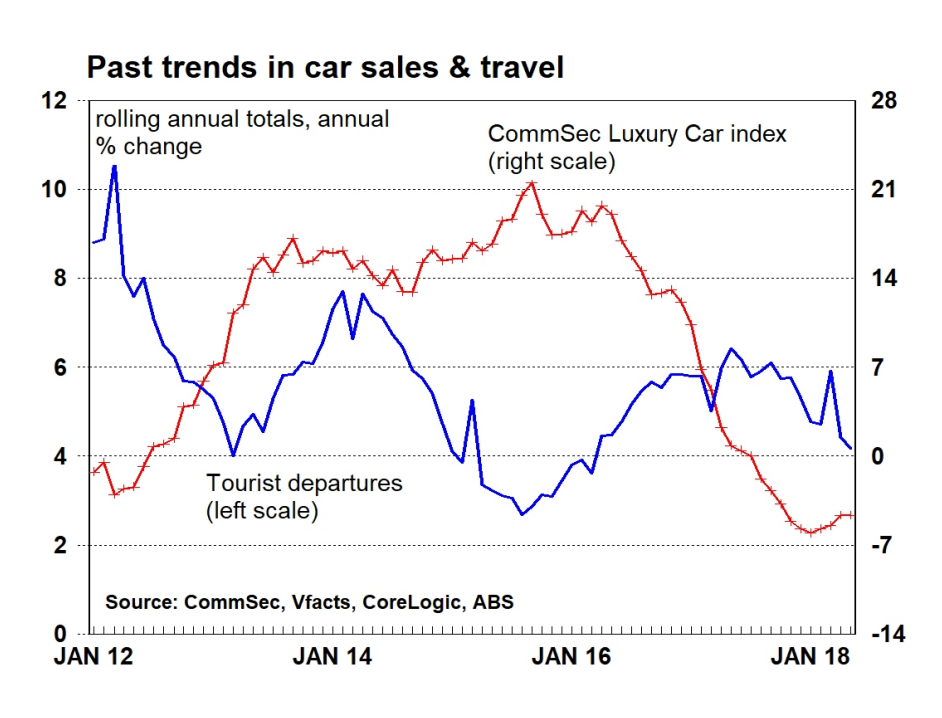 Higher-volume automakers are feeling the effects of supply-chain issues the most while some sales of higher-valued marques like Lotus, Ferrari and Bentley are being supported.

Clearly, this is a trend worth watching.

If luxury vehicle availability and sales improve it may signify the healing of supply-chain problems.

Also in the past, when Aussie consumers have cut back on the car and home purchases they have sought to travel instead – especially overseas.

Again, Covid provides a complication – the responsiveness may be heightened.

After two years of not being able to travel, Aussie travellers may be keener to embrace the opportunity to go abroad or interstate.

The fall in the car and home purchases and the lift in travel may seem more pronounced.

In short, there will be much to watch in the coming months – noting that the Reserve Bank is especially keen to monitor household spending to gauge the effects of higher interest rates.

In May 2022, CoreLogic reported that national home prices fell by 0.1 per cent, the first fall in 20 months.

And it has been higher-priced properties (the so-called ‘top end’ of the market) that have led the declines.

Home prices at the ‘top end’ of the market (the top 25 per cent of homes by capital value) fell by 0.8 per cent in May, the biggest decline in 22 months.

Prices at the ‘top end’ have slowed in trend terms for 14 months.

But home prices for the bottom 25 per cent of homes by value are still rising, up by 1.0 per cent in May following a 1.5 per cent gain in April. 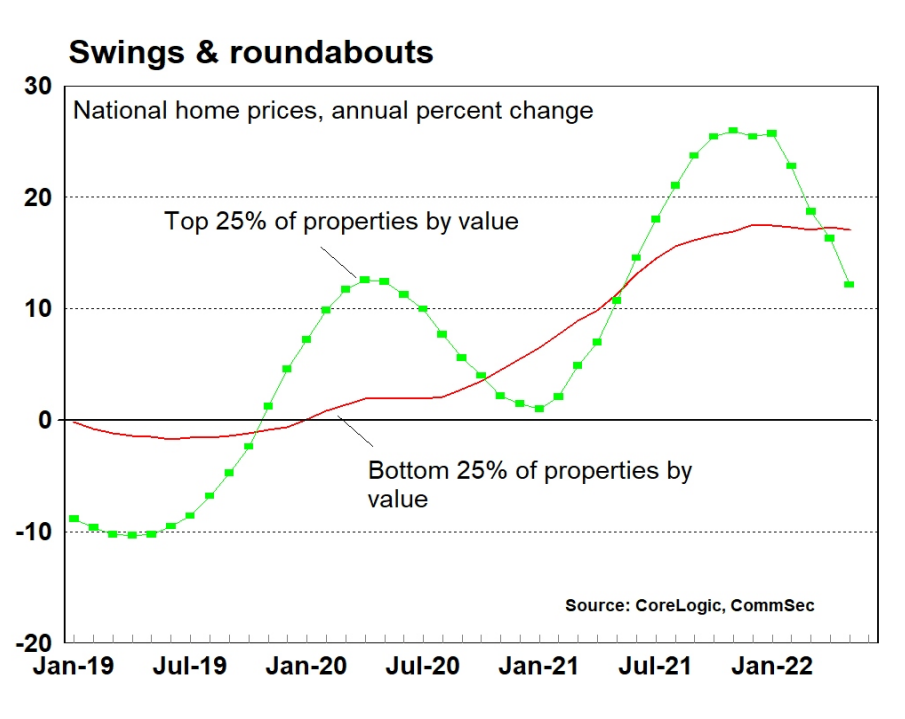 Home prices fell in most regions in May, led by Sydney and Melbourne.

These regions are amongst those with the highest median prices in Australia and the biggest stock of housing.

CommSec's luxury vehicle index led the recovery of the broader vehicle market just before Covid hit in early 2020 and maintained the out-performance through 2020 and into early 2021.

Now, annual sales of luxury vehicles are falling at a faster rate than the broader new-vehicle market. 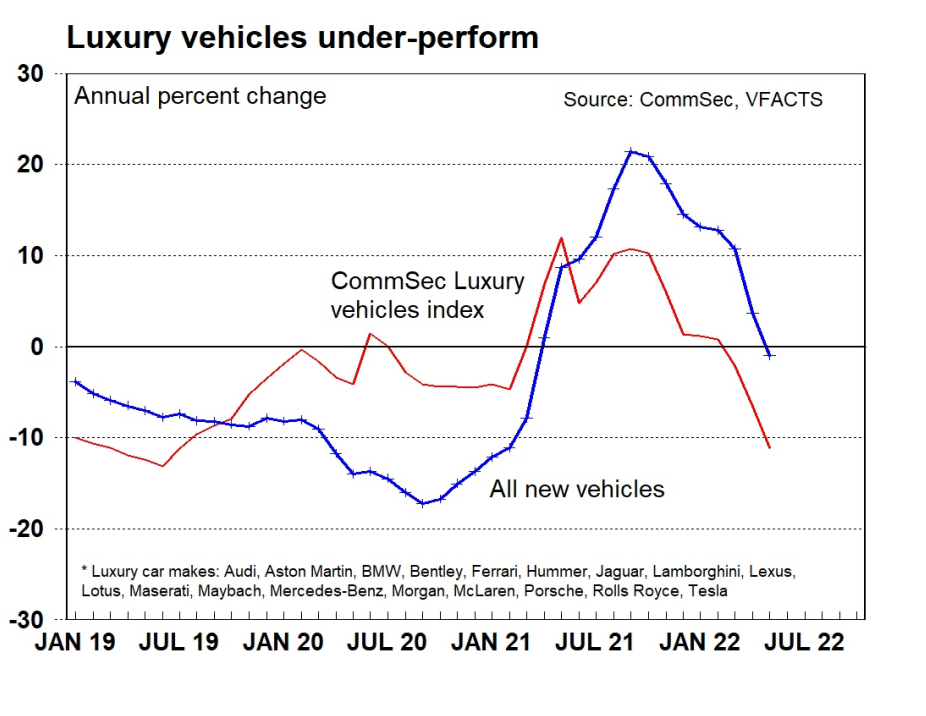 In the year to May 2022, sales of luxury vehicles fell by 11.1 per cent while sales across the broader market fell by just 1.0 per cent.

The stronger growth of the broader market partly represents spending by businesses on sports utility vehicles (SUVs), utes and other light and heavy commercial vehicles in response to government asset write-off provisions.

Rolling annual sales of commercial vehicles have actually risen over the past year, up 7.7 per cent.

Why the slowdown at the ‘top end’?

As always there is not just one answer.

Home buyers have been taking on higher levels of debt to support purchases and that has been no more in evidence than at the ‘top end’ of the housing market.

Fixed-term interest rates have also lifted markedly from recent lows while in May the Reserve Bank announced the first rate hike in 11½ years.

That said, wealth levels hit record highs at the end of 2021 and Australians have amassed more than $280 billion worth of savings during the pandemic.

So cycles may just be following their more natural course – eventually, slowdowns or retracement occur.

What we do know is that the ‘top end’ of car and housing markets have tended to lead broader markets in the past and similar trends are occurring now. 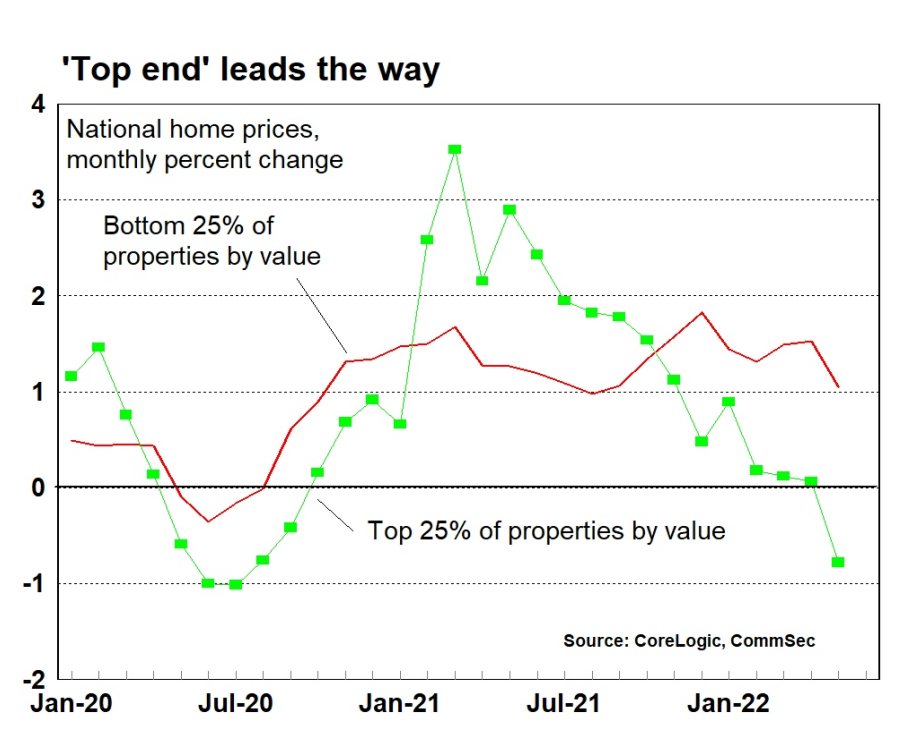 What do you need to know?

Luxury vehicle sales have underperformed in the broader market since June 2021.

Sales across the broader market fell by just 1.0 per cent over the period, supported by firmer sales of light and heavy commercial vehicles.

Luxury vehicles now represent 11.3 per cent of broader passenger and SUV sales, the smallest share in over two years (since March 2020). 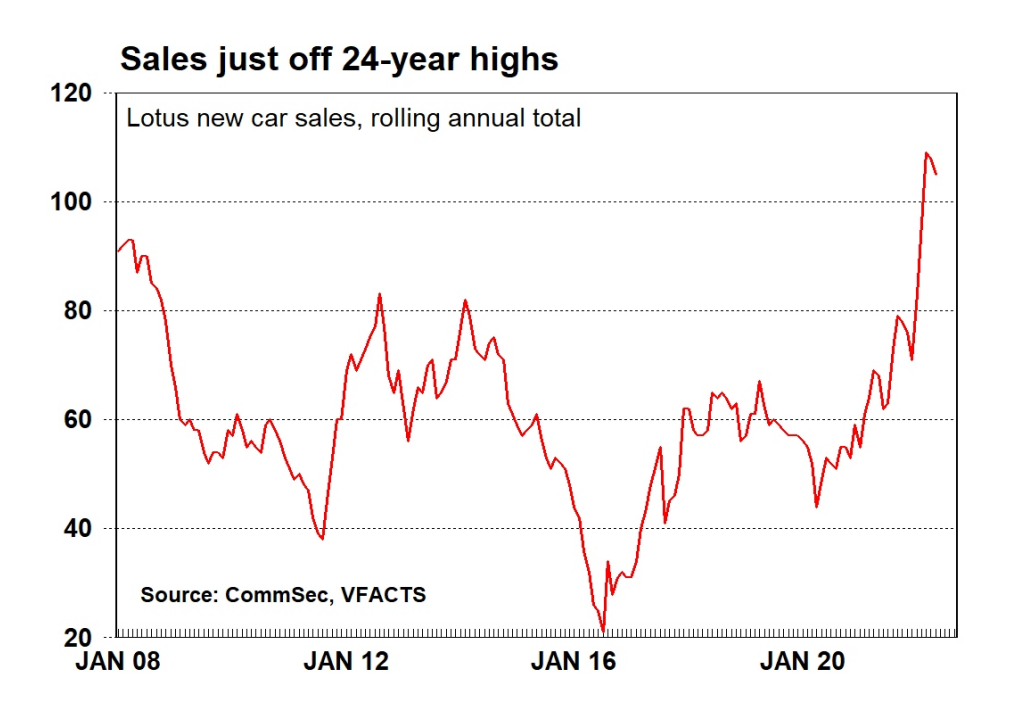 Sales of Ferrari are up 15.1 per cent on the year with Bentley up 22 per cent, Rolls Royce up 17.4 per cent and sales of both Aston Martin and Maserati are up 8 per cent from a year ago.

In contrast, sales of the higher-volume automakers appear to have been harder hit by the global shortage of computer chips.

Annual sales of Audi are at 11-year lows, Mercedes are at 8-year lows with Lexus sales are at 6-year lows. 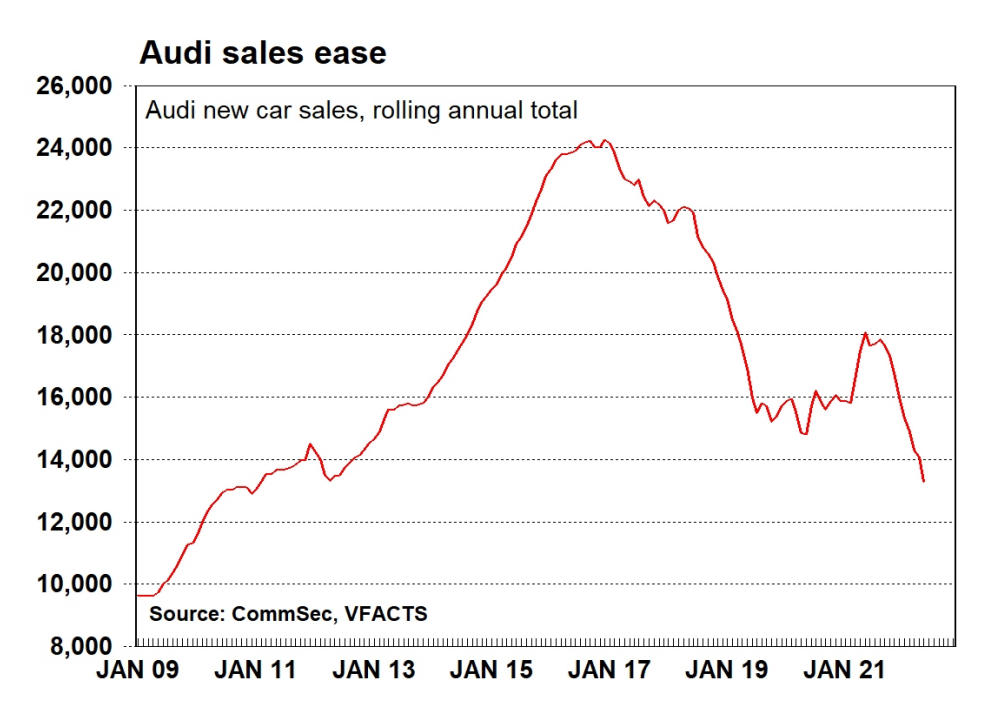