Dwelling values rose by 1.1% over the month of December and by 4.0% over the quarter to finish out 2019 on a positive note according to the CoreLogic national home value index.

This result represents the fastest rate of national dwelling value growth over any three month period since November 2009.

Darwin was the only region amongst the capital cities and ‘rest-of-state’ areas to record a fall in values over the month, with a -0.5% decline.

Although the monthly capital gains trend remains fast-paced, the 1.1% rise in December was softer relative to the 1.7% gain in November and the 1.2% rise in October.

This would suggest that the pace of capital gains may have been dampened by higher advertised stock levels or worsening affordability pressures through early summer.” 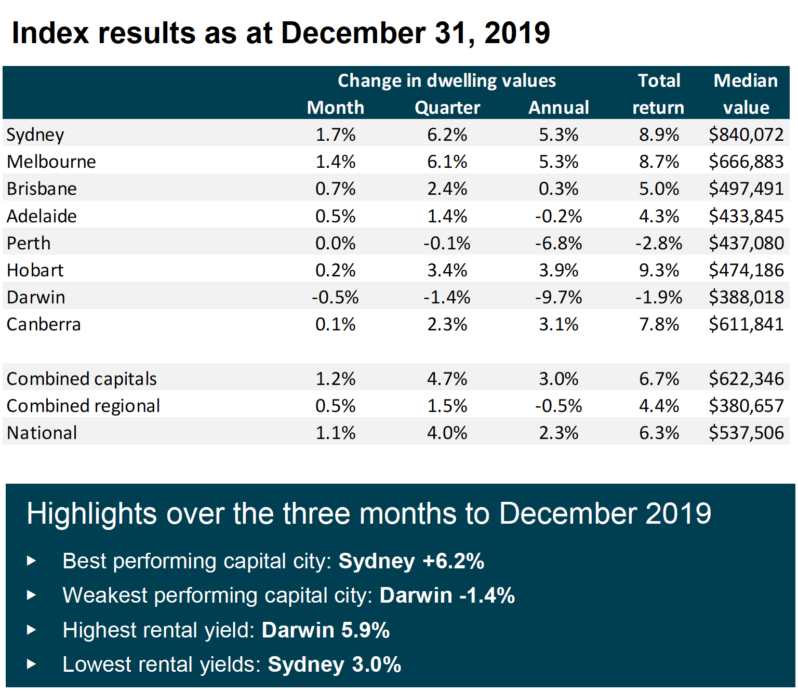 On an annual basis, Australian dwelling values tracked 2.3% higher over the 2019 calendar year with five of the eight capital cities, and five of the seven ‘rest-of-state’ regions, seeing the year out in positive growth territory.

Amongst the capitals, Sydney and Melbourne recorded the highest annual capital gain, with both cities posting a 5.3% rise in dwelling values over the year.

Regional Tasmania, where values were 6.1% higher over the year, led the regional markets. Values were down in Darwin by 9.7%, 6.8% lower in Perth and 0.2% lower in Adelaide over the year, while values also fell across regional Western Australia (-11.8%) and Regional NSW (-1.1%).

The positive year-end results mask what has been a year of two distinct halves -we saw capital city dwelling values fall by 3.8% over the first six months of 2019 and then rebound by 7.0% over the second half of the year.

Home values still below their peak

Despite a strong rebound over the second half of 2019, property values across most regions of Australia are still below their previous record highs.

Nationally, the CoreLogic index recorded a peak in October 2017; dwelling values remained 3.1% below their record high at the end of 2019.

If the current quarterly rate of growth persists into 2020, the national housing market will record a nominal recovery in March as dwelling values push higher to new record highs.

A nominal recovery in housing values implies home owners are becoming wealthier, which may also help to support household spending.

However, the flipside is that housing affordability is set to deteriorate even further as dwelling values outpace growth in household incomes, signalling a set-back for those saving for a deposit.

The only regions where housing values are currently tracking at new record highs are Hobart, Canberra and regional Tasmania. 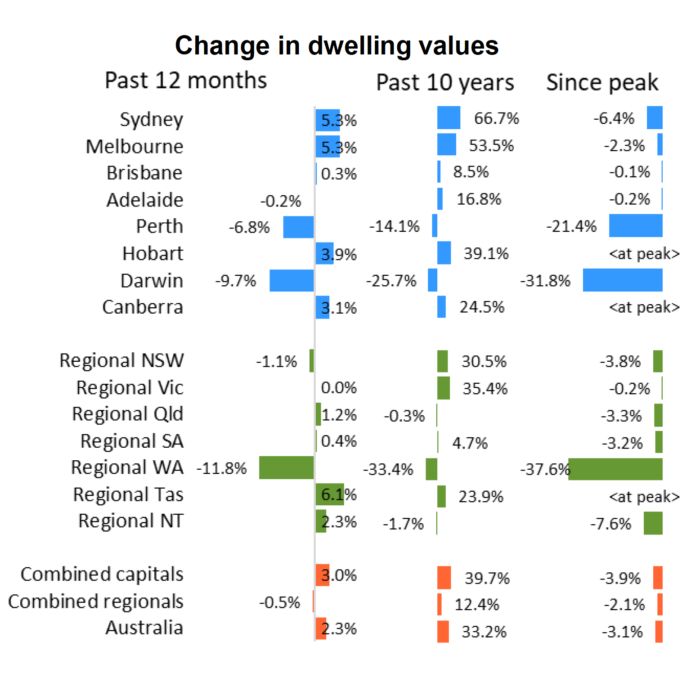