Property and shares drive household wealth to an all-time high

Australian households are wealthier than ever.

Australia’s property prices increased at a record pace in 2021 with recent data showing that the national median house price surged 25.7% and units by 7.7% year on year.

And it was this price surge, combined with solid share market gains, which has pushed total Aussie household wealth up another 4.5% in the December quarter to a new all-time high of $14.7 trillion, according to the latest CommSec report. 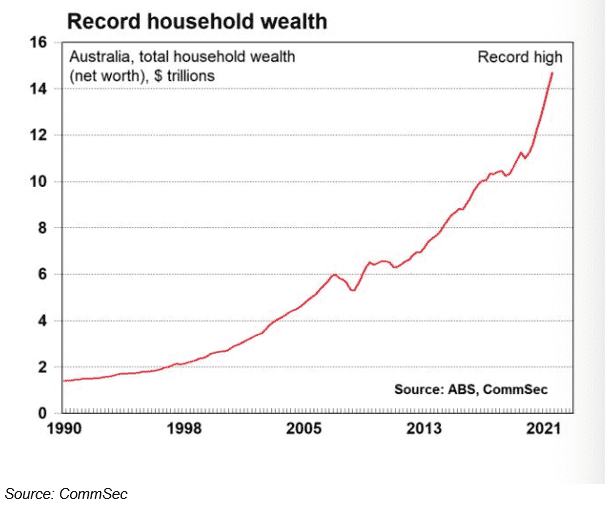 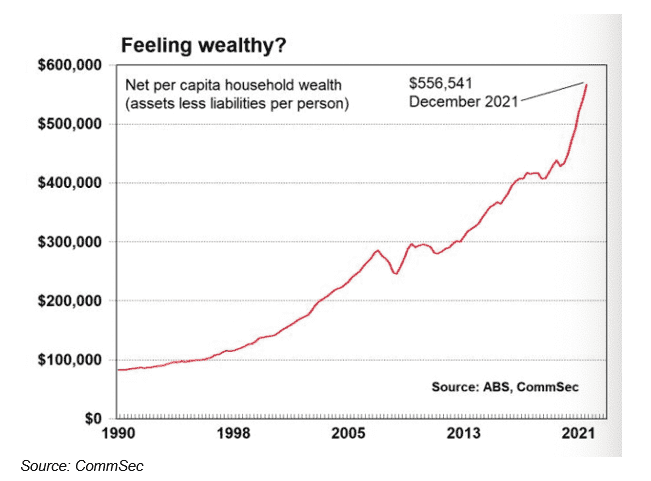 According to the ABS:

Increases in superannuation balances and currency and deposits contributed a further 0.7 and 0.3 percentage points respectively.

Offsetting these was an increase in household leans which detracted 0.4 percentage points from growth.

How is wealth measured?

These measurements are of net household wealth by estimating the difference between the value of household assets and liabilities or debts, so even though we have taken on further debt, our assets have grown significantly more.

Of course, wealth and income are two different things.

Income refers to wages, salaries, pensioners, and other government payouts.

So while wages growth remained tepid in 2021, the value of assets surged, primarily supported by record low-interest rates, government pandemic stimulus measures such as HomeBuilder, and the labour market recovery.

The increase of the superannuation guarantee to 10% from 1 July 2021 also boosted household super balances.

Recent APRA data shows that Australians have amassed $254.7 billion in excess savings over the two-year period to February 2022, enabling households to invest in value-adding assets such as property and shares, and further contributing to overall household wealth growth.

At the same time, the ABS’ residential home price index for March showed a 4.7% jump in the December quarter.

Meanwhile, the total value of land and dwellings jumped by an enormous $489.5 billion over the same period.

The increases are supported by record-low borrowing costs and increased housing activity. 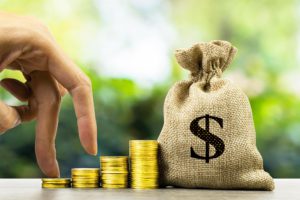 And it's not just Australia’s property market that has enjoyed a jump in value.

The benchmark Australian S&P/ASX 200 index rose 1.5% in the December quarter, pushing the value of shares up another $25.4 billion.

But housing liabilities also rose over the quarter - by 2.2% - driven by higher housing debt.

What this all means is that Australian households have been able to put additional money into equities: superannuation, cash and deposits and listed equities.

But CommSec warns that increased volatility in share markets in the March quarter of 2022, and with the pace of home price growth easing in both Sydney and Melbourne so far this year, household wealth could well have peaked at the end of 2021.