There is no end in sight for rising fixed interest rates

NAB has made its fourth round of fixed-rate hikes for 2022, with the major bank increasing rates by up to 0.60% for owner-occupiers and 0.80% for investors.

The major bank has increased owner-occupied rates by 0.60% for its 4-year fixed term.

For the median house price in Sydney, which amounts to $1,403,154 according to CoreLogic’s latest Hedonic Home Value Index, this rate increase sees monthly repayments on this loan now $400 higher for borrowers choosing to lock in from today.

NAB also increased its 2, 3 and 5-year owner-occupied fixed terms by 0.50% while hiking fixed rates for investors, with the biggest increase seen in its 2 years fixed rate for investors paying interest only, which has increased by 0.80%.

This is in line with what the other big banks are doing and there is no end in sight for rising fixed interest rates.

Fixed-rate loans starting with a ‘1’ have all but disappeared

The only fixed-rate loan below 2% listed on Canstar.com.au is UnityBank’s 1 year fixed rate available exclusively for first home buyers at a rate of 1.84% (2.11% comparison rate).

The latest ABS Lending Indicators data shows that fixed-rate loans made up just 28.1% of new loan commitments in February.

This is the lowest proportion since April 2020 and well down from the peak in July 2021, when fixed-rate loans accounted for 46% of new loan commitments. 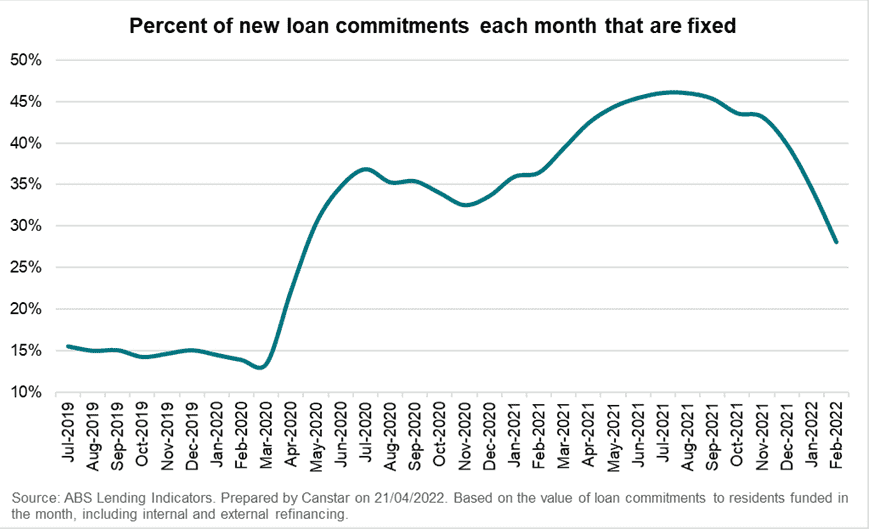 Lowest rates from the major banks

NAB is the latest of the big banks bumping up fixed home loan interest rates, as higher funding costs for all but short term lending continue to bite.

One year fixed rates and variable rates for owner occupiers have not been moved, with low cost savings and transaction accounts still supporting short term lending.

The days for fixing the interest rate, at least at the big four banks, look to be behind us.

Borrowers with a strong aversion to increasing repayments and an expectation of a very high Reserve Bank cash rate in three or so years from now, may still might see value in locking in with NAB’s five year fixed rate, but at 4.99 percent, 2.80 percent above its variable, this will be a small minority.

Fixed rate lending is very last season, falling to 28 percent of new lending in February, way down from a peak of 47 percent in July last year.

Borrowers have reacted to rate increases and with two more hikes since February, it will be even more out of vogue now.

NAB’s fixed interest only rates for residential lending are now between 0.40 percent and 1.10 percent higher than principal and interest, recognizing the heightened risk in this lending as interest rates start to rise.

The banks are expecting the Reserve Bank to move its cash rate up in June and the moves NAB has made today provide further reinforcement to this view.

When the RBA starts to increase the cash rate it doesn’t stop at one hurdle, and existing borrowers, immune to fixed rate increases, will also feel the sting of increased repayments. 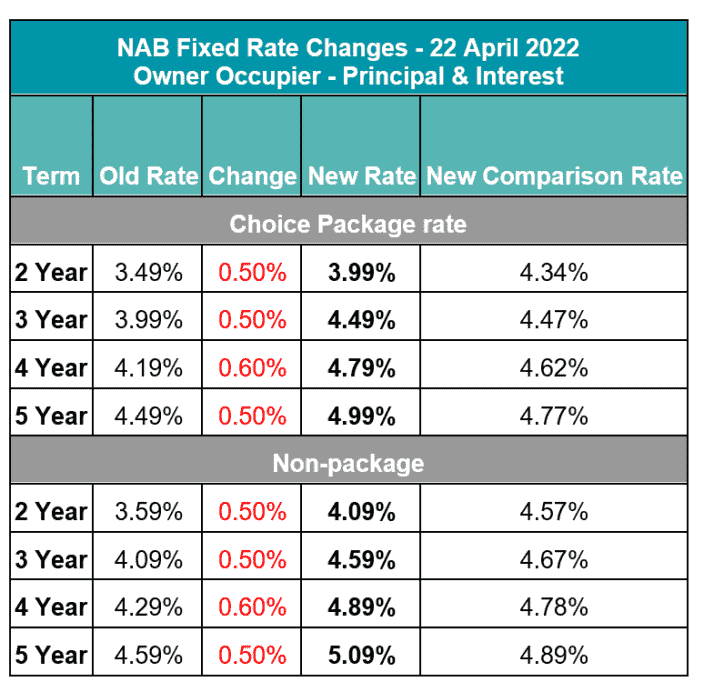 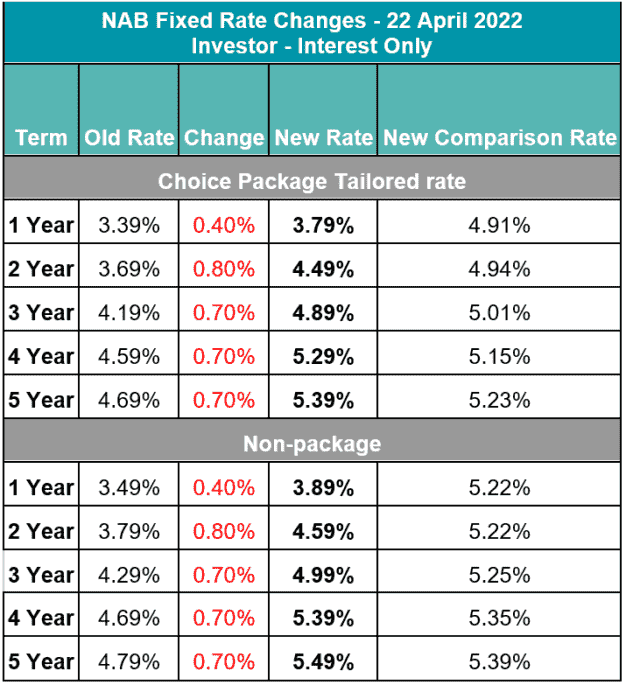