Australia’s housing value rebound continued into 2020 with the CoreLogic national home value index up by 0.9% over the first month of the year.

This now takes the annual growth rate to 4.1%; the fastest pace of growth for a twelve month period since December 2017.

Housing values rose in January across every capital city and rest-of-state region, apart from regional South Australia, where values held firm over the month.

This demonstrates a broader recovery trend which originally began in Sydney and Melbourne midway through 2019, and gradually spread to other areas of the country. Across the capital cities, Sydney and Melbourne continued as the leaders for capital gains after recording more substantial declines during the recent downturn.

Values increased by 1.1% and 1.2% over the month respectively, while Hobart (+0.9%) achieved a higher growth rate relative to most other regions.

The remaining capital cities generally saw a mild rise in values over the month.

Perth dwelling values posted their first rise over a rolling quarter (+0.4%) since a brief period of growth in May 2018.

Darwin, where dwelling values have been consistently falling to be almost 32% below their 2014 peak, also recorded a subtle rise (+0.1%) in January.

Across the regional markets, the strongest conditions were recorded in regional Tasmania, where values were up 1.3% over the month, followed by regional Western Australia (+0.9%) then regional Victoria and regional Queensland, both up 0.8%

Highlights over the three months to January 2020

Although there is an apparent recovery across every GCCSA (Greater Capital City Statistical Area) of Australia, the speed of growth has lost some momentum over recent months. 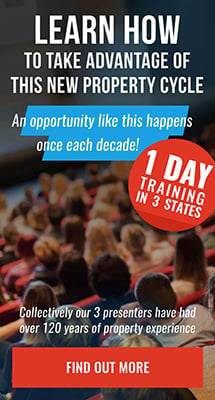 The national dwelling index slowed from a recent monthly peak of 1.7% in November, to 0.9% in January.

Seasonal effects provide some explanation for the slowdown.

The CoreLogic seasonally adjusted hedonic index implies the time of year shaves about 1 basis point of growth from the December reading and 2 basis points from the January reading.

Factoring in the seasonal affect, the latest results indicate a reduction in the speed of growth across most markets, especially for Sydney and Melbourne where affordability constraints are once again becoming more pressing.

As advertised stock levels rise over the early part of the year, we could some further dampening of growth rates.

With housing values rising at the quarterly pace of 3.7%, we are likely to see a nominal recovery in the national home value measure within the next two-to-three months.

Perth and Darwin will take a much longer time to see values recover.

Although the Perth market seems to be moving into a recovery, housing values remain 21.3% below their 2014 peak and Darwin values are 31.8% below their peak.

The strongest gains continue to be recorded across properties in the upper quartile value range.

Across the combined capitals, the value of properties in the upper quartile rose by 1.2% in January compared with a 0.2% lift in value across the lower quartile.

The trend towards a stronger performance across premium markets is most evident in Sydney and Melbourne, and to a lesser extent, Brisbane.

The stronger performance across the more expensive end of the market comes after a larger correction during the downturn, but also may reflect a rise in borrowing capacity following the changes from APRA in July last year, as well as the dominance of owner occupier buyers (rather than investors) through the recovery phase to date. 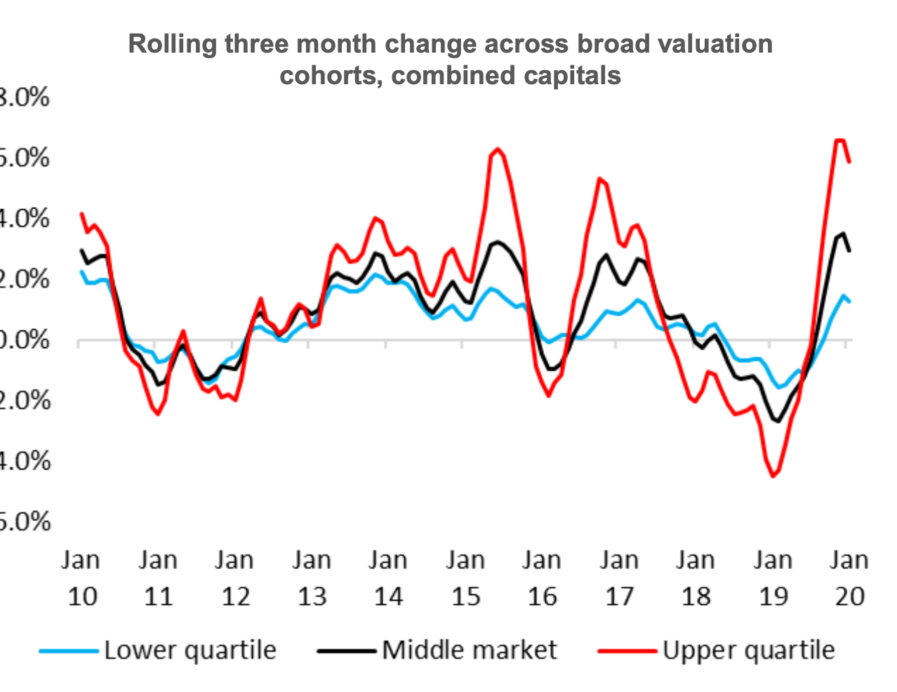 The top performing sub-regions were once again confined to areas of Melbourne and Sydney.

The weakest conditions have generally been across Perth and Darwin, as well as Sydney’s Central Coast region and two sub-regions in Adelaide.

Melbourne’s Inner East, with a median dwelling value of $1.179 million, is leading the charge, with values up 16.2% over the year.

Despite the significant gains over the past year, values remain 2.9% below their August 2017 peak.

With such a rapid rate of growth, housing values in this area are likely to reach a new record high over the coming months

On a quarterly basis, the vast majority of capital city sub-regions have moved back into positive growth.

Only five of the capital city sub-regions have recorded a decline in home values over the past three months, comprising Darwin, Perth’s North West and South East, Mandurah and Brisbane’s Moreton Bay North. 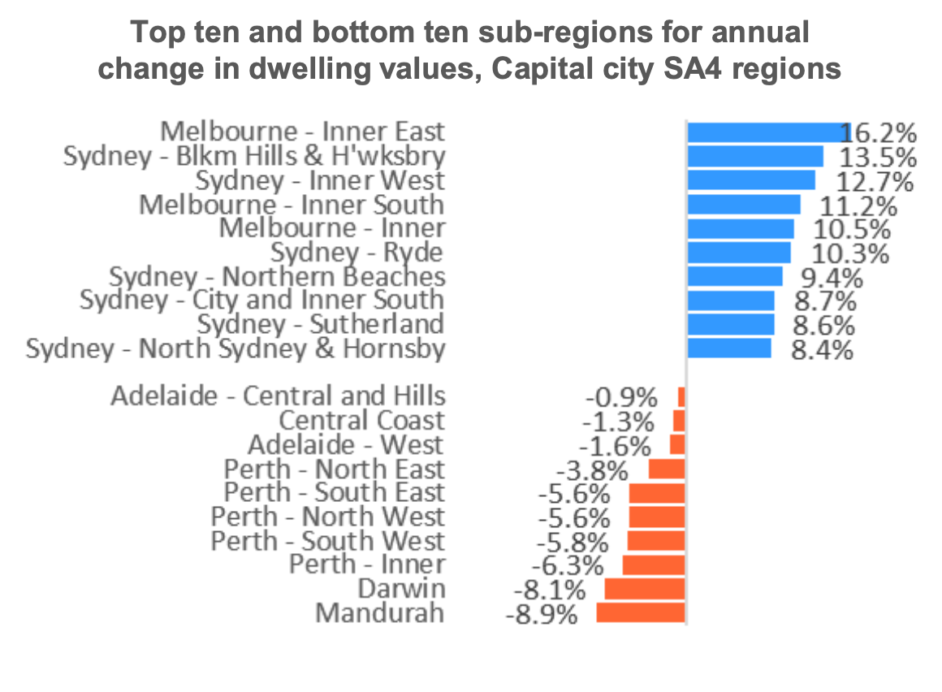 Broadly, regional housing values are up 0.4% over the twelve months ending January compared with a 5.2% rise across the combined capitals.

Across the forty-two non capital city sub-regions, twenty-five areas have recorded a rise in values over the past twelve months.

On a quarterly basis, thirty-eight of the non-capital city sub-regions recorded a rise in housing values, with only four regions recording a drop in values over the past three months.

The weakest regional housing markets continue to be located within the broader ‘outback’ regions of Queensland and across southern Western Australia, where housing demand remains low due to the persistent drought and weaker economic conditions. Seasonal factors come into play at this time of the year.

Through February we will receive a much better feel for housing market trends as activity returns to normal.

Despite the seasonality, there is evidence to suggest that housing value growth rates are tapering in Sydney and Melbourne, although with values rising at more than 1% month-on-month, this pace is still unsustainable considering household income growth is sluggish and housing affordability challenges are worsening.

The ratio of housing values to household incomes, based on data to September last year, has risen to 8.5 in Sydney and 7.4 in Melbourne (up from a recent low in the June quarter of 8.2 and 7.2 respectively).

Since September, the ratio of dwelling values to household incomes is likely to have increased further.

Housing remains more affordable relative to the highs of 2017, however it’s clear that affordability remains a significant barrier to higher buyer participation in Australia’s largest cities.

Smaller cities, including key affordable regional markets where economic and demographic trends are healthy may offer some insulation from these affordability constraints.

Looking ahead, interest rates are expected to see further reductions, which, along with consistently strong population growth, is likely to continue to support housing demand.

From a supply perspective, new housing construction remains in decline, despite the uplift in dwelling approvals over the past few months. This may lead to undersupply pressures across the new housing sector later this year, providing support for housing prices through the year.”

A big test for the market will be advertised supply levels.

As the market moves out of the festive season slow down, we are expecting more home owners to take advantage of the strong selling conditions and recovery in housing prices.

Advertised listing numbers remained below average through most of 2019.

We’re expecting the number of homes available for sale to also rise in 2020, which may result in a wider range of choice.

The knock-on effect could dampen the sense of urgency to purchase housing, and could mitigate more rapid growth. 'Latest stats show housing values rose across every capital city in January.' have no comments