Lockdowns continued to keep a lid on credit card spending in August, according to the latest Reserve Bank of Australia credit and charge card data .

The latest Reserve Bank figures show lockdowns and the limited ability for a large portion of Australians to spend likely contributed to a reduction in the number and value of credit card purchases in August.

At the same time, the national credit card debt accruing interest has continued to tumble in lockdown, dropping by $582 million in the month of August.

The drop comes on the back of a significant fall of $1.11 billion the month prior.

As a result, credit card debt has fallen by $1.69 billion in just two months since the start of the Delta lockdowns (July and August 2021).

While lockdowns may have curbed credit card expenditure in August, spending may blow out in the coming months, with a new Canstar survey revealing that 68% of Australians have a major purchase planned once the nation reaches its 70-80% vaccination targets.

When asked about the first major purchase they intend to make once restrictions lift, the top three responses from Australians included: 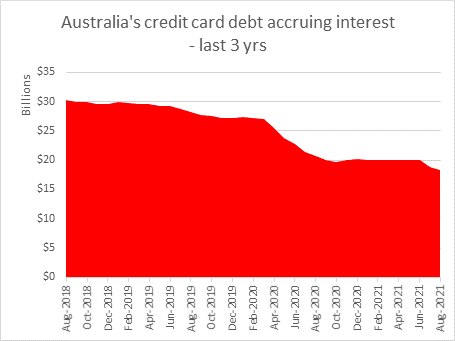 RateCity.com.au research director, Sally Tindall, said the slide in credit card debt was likely to continue for the duration of lockdown.

“As tough as they are, lockdowns have been incredibly effective in getting people to focus on their personal finances.

Many families have realised credit card debt is public enemy number one and clearing it has become a priority.

With Christmas around the corner, and COVID relief payments starting to wind up, people could start falling back into old habits if they’re not careful.

At just over $18 billion in credit card debt, there’s still plenty of work to be done but we’ve come a long way in a relatively short space of time. Just five years ago the national credit card debt was north of $31 billion.

The concern, however, is some people are swapping one form of credit for another.

The meteoric rise of buy now, pay later has put a significant dent in credit cards, but people need to be careful they’re not swapping one credit addiction."

We never want to see extensive lockdowns repeated, but for those whose income has proven resilient, the lockdowns have provided unexpected opportunities to get household balance sheets back into shape. 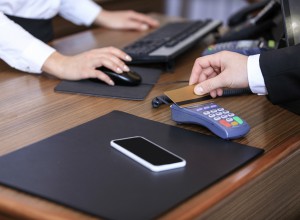 With 68 percent of people already planning a major spend when the vaccination targets are achieved, the country looks primed for a spending spree in November and December.

Travel in particular looks set to boom with 30 percent of Australians saying that a holiday is the first major purchase they intend to make once restrictions ease, which will be a welcome relief for the beleaguered tourism sector.

Hopefully reduced credit card debt is sustained and that big spending coming out of lockdown doesn’t undo any of the hard yards done over the past 18 months, when credit card debt accruing interest was cut by a third, a massive $9 billion.

To avoid incurring excessive credit card debt, don’t fall victim to the notion of ‘freedom spending’,that is, blowing the budget to celebrate the end of lockdowns.”