Australian housing values racked up a third consecutive month of declines in July, with CoreLogic’s home value index dropping 0.6% over the month, a slight improvement from June when the national series was down 0.7%.

Across the capital cities, only Canberra (+0.6%) and Adelaide (+0.1%) posted a rise in dwelling values over the month, while Melbourne (-1.2%) and Sydney (-0.9%) led the decline, recording the largest month-on-month falls in July.

Regional Victoria (-0.5%) and regional Western Australia (-3.2%) were the only non-capital city markets to record a fall in values over the month. Housing markets have remained relatively resilient through the COVID period so far.

The impact from COVID-19 on housing values has been orderly to-date, with CoreLogic’s national index falling only 1.6% since the recent high in April and housing turnover has recovered quickly after it’s sharp fall in late March and April. 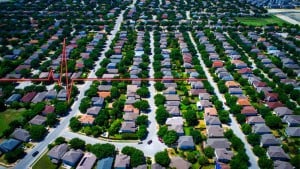 Advertised supply levels have remained tight, with the total number of properties for sale falling a further 4.3% in the 4 weeks to July 27th, sitting 15.2% below where they were this time last year.

However, with fiscal support set to taper from October and repayment holidays expiring at the end of March next year, the medium-term outlook remains skewed to the downside.

Urgent sales are likely to become more common as we approach these milestones, which will test the market’s resilience.

Similarly, the recent concerns of a second wave of the virus and the potential for renewed border closures and stricter social distancing polices are likely to further push consumer sentiment down.

This is likely to weigh on both home buying and selling activity more broadly. The most expensive quartile of housing continues to lead the downturn.

Higher value markets tend to be more reactive to changes in the economic environment, having led both the upswing and the downturn over previous cycles.

The COVID related downturn has seen this trend playing out again, with upper quartile values down 2.9% across the combined capital city index since the end of March, while lower quartile values have fallen by only 0.5%.

This capital city trend is driven mostly by Sydney and Melbourne, while the smaller cities have shown a mixed result across value segments.

Importantly, the upper quartile of these markets also recorded the most significant run-up in values throughout the second half of last year and into early 2020.

Real estate agent activity has recovered to the same levels as a year ago.

Real estate agent activity has recovered to the same levels as a year ago.

After plummeting by around 60% between mid March and Easter, real estate agent activity across CoreLogic platforms is now tracking at similar levels compared with 2019.

Real estate agent activity is highly correlated with the number of new listings coming on the market, with a two week lead.

The number of newly advertised properties is up 46% from the recent lows of early May.

Nationally, the rolling 28 day count of new listings was 1% higher than a year ago, with new capital city listings tracking 8.9% above levels recorded this time last year.

The rise in fresh listings implies home owners have become more willing to test the market.

While new listings are ramping up, the total listing count remains 15.2% below last year’s level nationally and 12.5% lower across the combined capitals.

The diverging trend between new and total listing numbers implies a strong rate of absorption where demand for established housing stock is outweighing advertised supply. 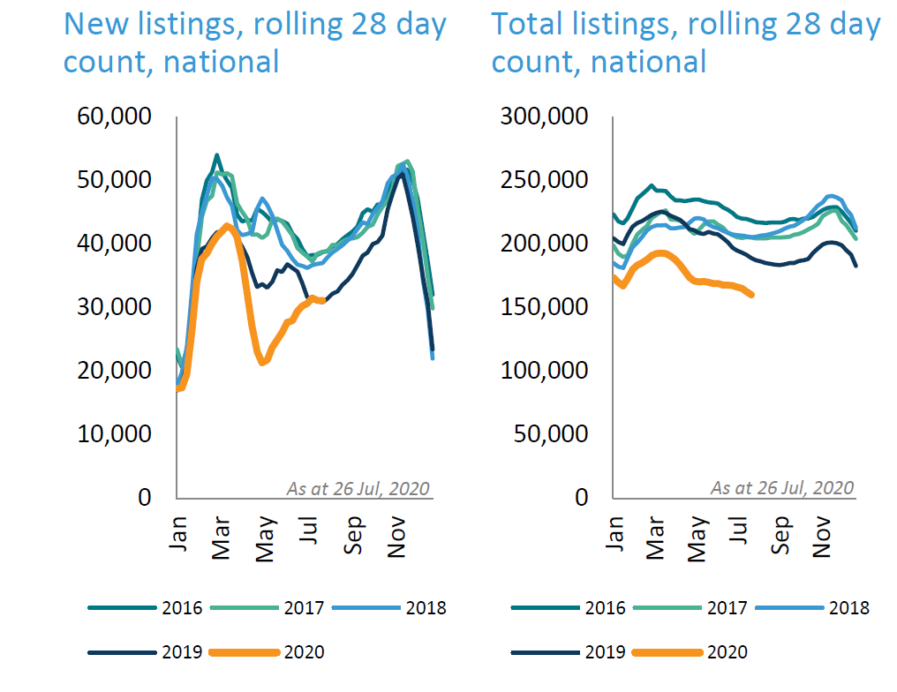 Auction markets showed a temporary recovery through June and early July but have since weakened as Melbourne moved back into lockdown.

Auction volumes have been tracking higher than a year ago since late June and auction clearance rates had been hovering around the decade average (61%) since the second week of May.

Since early July, clearance rates have trended lower due to a substantial rise in withdrawn auctions in Melbourne.

After recovering from recessionary lows in April, consumer sentiment is again weakening due to concerns associated with the second wave of the virus in Melbourne, and growing case numbers nationally and internationally.

Consumer sentiment readings show a high correlation with housing market activity, so the recent downward trend implies home buyers and sellers may once again retreat to the sidelines.

Sales activity has trended higher since May.

After home sales plunged by about one third in April, sales activity has consistently improved.

CoreLogic estimates for national sales over the past three months were tracking 2.9% higher than the same period in 2019.

The rebound in CoreLogic estimates of sales activity is validated by the strong rate of listings absorption, a similar lift in purchase related valuations and improvements in consumer sentiment.

However, the recent slump in sentiment amidst a new wave of the virus could interrupt the rise in home sales until restrictions are lifted and confidence returns. 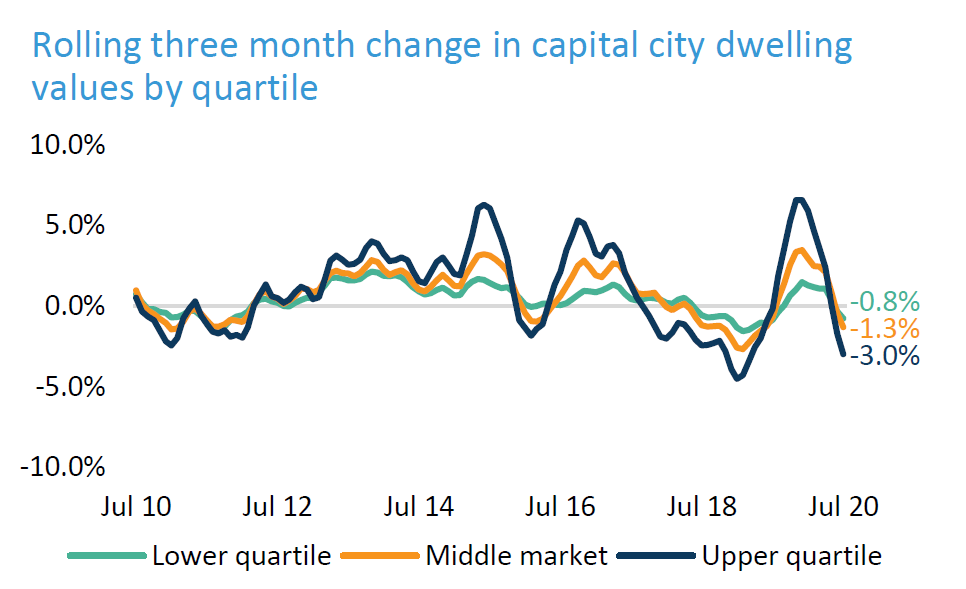 Rental rates have continued to trend lower through July, with the weakest rental conditions emanating from Hobart, Sydney and Melbourne, and the unit sector driving the largest falls. 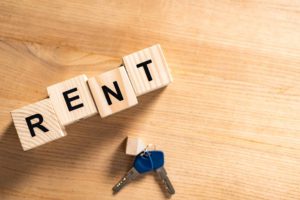 Since March, capital city house rents have dropped by only 0.3% while over the same period unit rents are down a more substantial 2.6%. Hobart stands out as recording the largest decreases, with rents for houses down 2.0%, and units down 4.4% since March.

Weaker rental conditions are most evident in those markets where rental demand has been impacted by border closures and supply additions.

Some inner-city areas of Melbourne and Sydney have seen rental listings more than double since March due to the combined effect of temporary migrants departing, and overseas arrivals, including foreign students, stalling.

Compounding this weak demand position is the surge in construction activity and investment over previous years, which has added to inner-city rental supply. 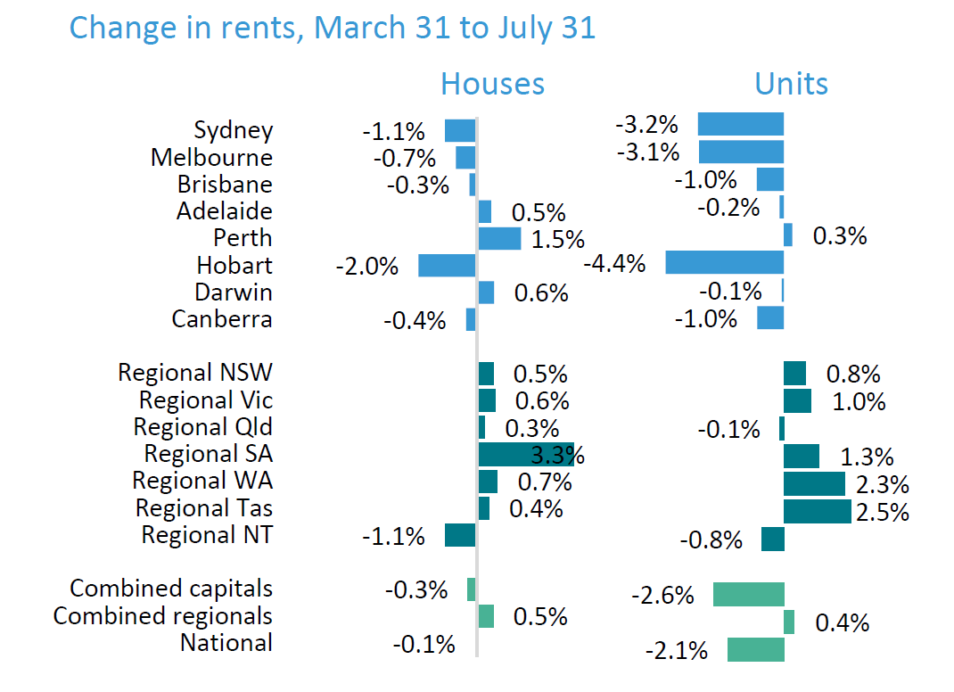 Anecdotally, the transition of short-term accommodation, namely Airbnb, to permanent rentals is temporarily adding to supply.

Additionally, the significant employment decline across food and accommodation services, arts and recreation services is compounding the weak rental demand as these sectors workers are more likely to rent. 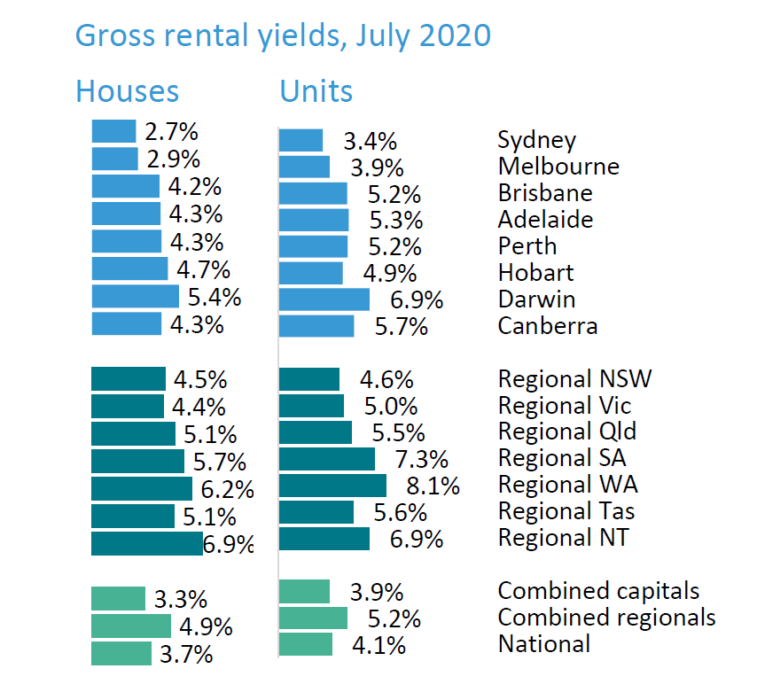 To date these sectors have seen the largest number of job losses and impact to wages.

With the second wave of social distancing policies and border closures, these workers are once again facing hardship” he said.

Perth and Adelaide are showing the strongest rental conditions amongst the capital cities.

In summary, housing markets have weathered the COVID storm much better than originally anticipated.

The decline in home values has been orderly, with only modest reductions in most areas.

Turnover has recovered quickly and is tracking higher than a year ago - although that is a relatively low benchmark, where this time last year was around the trough of the previous cycle.

However, demand is e vident, as advertised stock levels are being absorbed faster than fresh stock is being added to the market.

While interest rates are set to remain at their current lows for the foreseeabl future, the government’s fiscal response will start to taper in October and repayment holidays are set to expire at the end of March next year.

The removal of this support will test the market’s resilience.

As stimulus measures wind down and borrowers taking a repayment holiday face up to their debt, its logical to expect a rise in distressed properties coming onto the market.

The extent to which this causes additional downwards pressure on home prices depends on how the Australian economy is travelling at that time.

Further virus outbreaks present a clear and present danger to the depth and length of the recession, and the performance of the housing market.