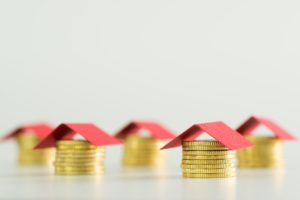 Across the individual property types nationally, houses substantially outperformed units over the year, with house rents rising by 3.9% annually against a 3% reduction in unit rents.

The decline in unit rents was largely concentrated around the inner city markets of Melbourne and Sydney, contributing to a city-wide drop of -7.6% and -5.7% respectively over the year. Unit rents were down -4.6% across the combined capital city unit market.

House rents were up 3.3% collectively across the combined capital city markets which was lower than both regional houses and units which ended the year 5.5% and 4.5% higher.

The only other capital cities to record a reduction in rental rates over the year were units across Brisbane (-1.1%) and Hobart where house rents were down -1.0% and units by -2.0%.

In contrast, Perth and Darwin were amongst the best performing rental markets of 2020.

House rental rates across Perth reached double digit growth over the year to December, at 10.1%, while unit rents rose by 6.8%. In Darwin, rental rates increased for houses by 9.6% and units by a lower 7.6%.

The remaining capital cities all recorded relatively consistent rental growth over the year, however the same trend is apparent across the board where houses recorded higher growth in rents than units.

Canberra house rents were up 4.7% over the year, while unit rental rates across the territory rose by 1.5%.

Similarly across the Adelaide market, house rents were up 3.6% compared to a 1.4% rise across the unit market and Brisbane house rents increased 2.7% against a -1.1% reduction in unit rents. 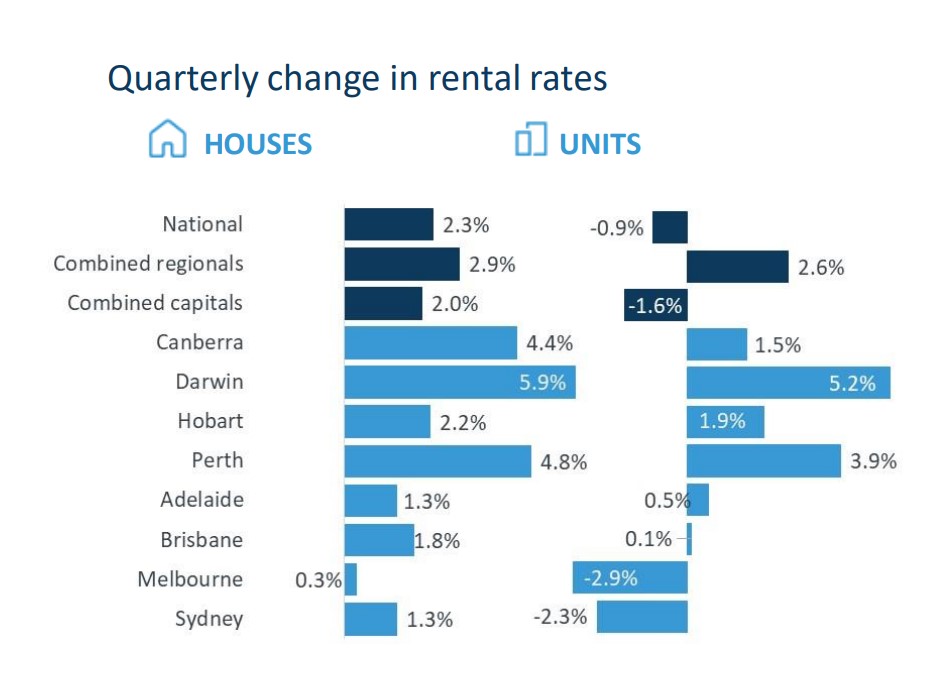 Sydney units however maintained their position as the nation’s most expensive capital city in which to rent a unit despite the $36 reduction recorded in the year to December.

The latest figures saw Melbourne bumped down the list, to come in as the third most affordable capital city to rent a house.

While the city has recorded the largest falls in unit rental rates over the year, Melbourne remains the third most expensive unit market of the capital cities behind Sydney and Canberra.

At the end of December 2020, gross rental yields nationally were recorded at 3.71%, down from 3.81% a year earlier as dwelling values outperformed rental growth.

The national rental market ended the year 1.9% higher, this was against a 3% rise in dwelling values. 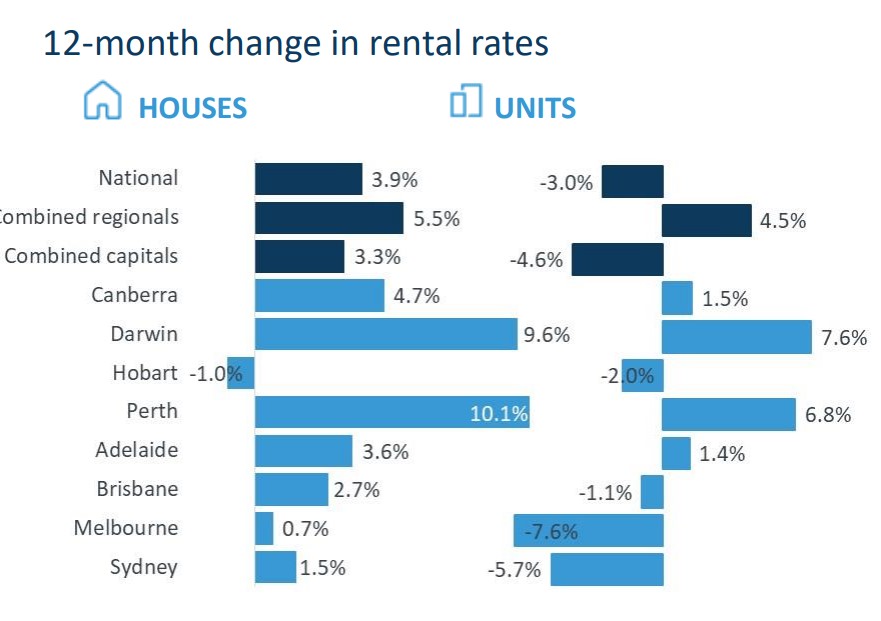 Gross rental yields across the combined capital cities were sitting at 3.42% in December 2020 down from 3.51% a year earlier.

The combined regional markets recorded a more significant fall in gross rental yields from 5.03% in December 2019 to 4.83% in December 2020 due to the stronger appreciation in values compared with rents.

Given the large falls in rental rates across the unit market it’s no surprise unit yields are driving the lower overall capital city yield profile. 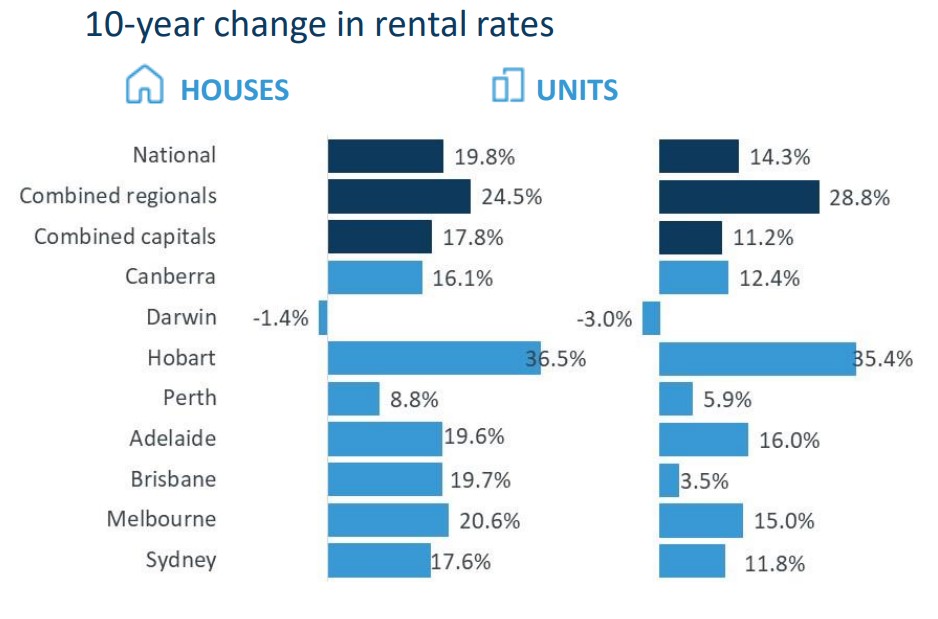 Unit yields across the combined capital cities are down -25 basis points over the year, to 3.76% compared to a 3 basis points decrease to 3.28% for houses.

Stronger value growth is driving yield compression across the combined regional markets, with house values up 7.1% over the year against a 5.5% rise in rental rates. 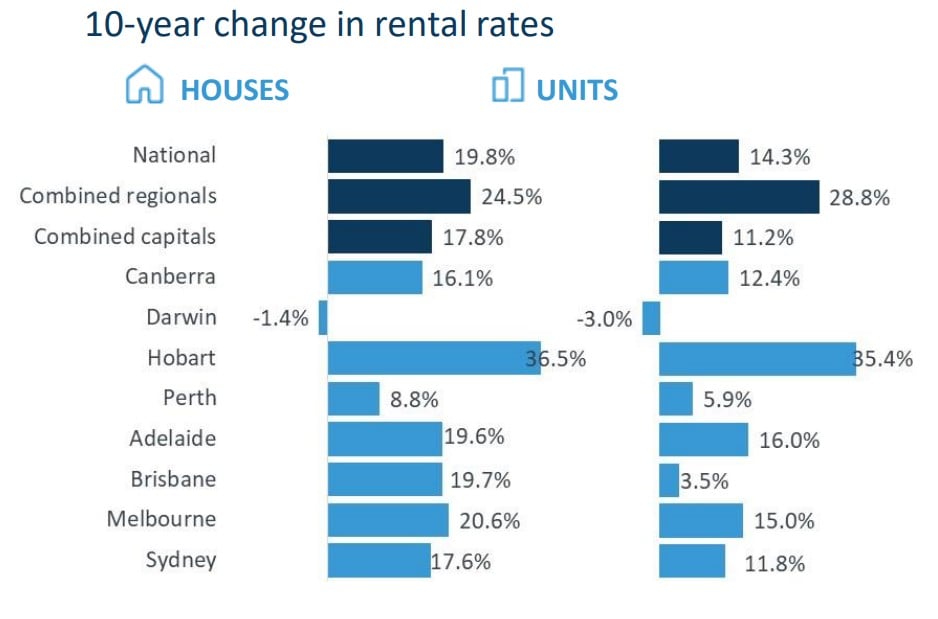 The largest falls in yields were seen across the Hobart house market, down -56 basis points over the year as rents fell -1.0% compared with 7.7% value growth.

Darwin continues to produce the highest yields of the capital city markets, also recording the largest increase in yields over the year.