Australia’s top 10 are wealthier than ever before

Australia's rich are getting richer according to The List, published by The Australian.

Australia now has a massive 131 billionaires and their average net worth is $2.08 billion.

In fact, the top 10 on The List are wealthier than ever before, led by two of the country’s most successful businesswomen who have changed the face of corporate Australia.

Fellow mining magnate Andrew Forrest comes in a close second with a wealth of $31.77 billion.

It seems like more money is being made by Australia's rich than ever before.

Here are some highlights:

While this year’s edition of The List has more members from the technology sector than ever before – 29 – some of the so-called older industries, such as manufacturing, are showing resilience.

“The technology revolution is heralding a shift from “old” industries such as mining and manufacturing to newer online sectors, bringing significant change to the ranks of the country’s wealthiest individuals.

It has also helped create a record number of new names on The List, with 29 debutants.

Despite the pandemic, some sectors - retail in particular - have done incredibly well and created a surge in new wealth on The List.

It’s been a fun uncovering the new names coming up amongst the old guard of The List and sharing their stories,” said

Recognising the impact the technology revolution has had on The List, and to help support some of the everyday Australians affected by the recent floods, The Australian is releasing a collection of non-fungible token (NFT) artworks to raise funds for the St Vincent de Paul Society’s Flood Appeal as part of this year’s The List: Australia’s Richest 250.

The NFTs are tokens attached to digital artworks commissioned especially for The List and created by illustrator Rebel Challenger.

The artworks are of the top 20 richest Australians, as well as five of the new young guns.

Most of the top 250 wealthiest Australians are collectors, whether it be of art, supercars or spectacular property. We hope that our NFT artworks of the top 20 Richest 250 on The List become collectable in themselves.

The auctions will be conducted on OpenSea, an online non-fungible token marketplace.

If there is one trait that permeates the ranks of The List: Australia’s Richest 250 this year, it has to be ambition. Justin Hemmes is a case in point, and it’s a trait that so many on The List share.

Canva is being hailed as “the new Google” with co-founders and husband and wife team Melanie Perkins and Cliff Obrecht, 34 and 36 reaching the Top 10 for the first time.

They are ranked 8 and 9 respectively on The List with a combined value of $15.89 billion.

The Canva business is valued at more than $55 billion.

This year sees a record 29 newcomers on The List, with wealth surging despite the pandemic.

Fung Lam who is just 40 years old is a newcomer to The List. 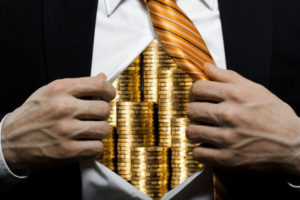 His New Aim business has delivered to about half the households in Australia over the past four years and works with Wesfarmers, Woolworths, Bunnings, Myer and Catch of the Day to name a few.

The retail sector has thrown up some of the best-known newcomers on The List including Mecca cosmetics owners Jo Horgan and Peter Wetenhall at 188 and 189 respectively and combined wealth of $674 million along with Tania Austin who owns Decjuba fashion brand and is worth $640 million.

Simon Beard reveals that he had long focused on achieving his goals before striking it rich with his retail group.

ALSO READ: The most important of all the Rich Habits – Reading to Learn