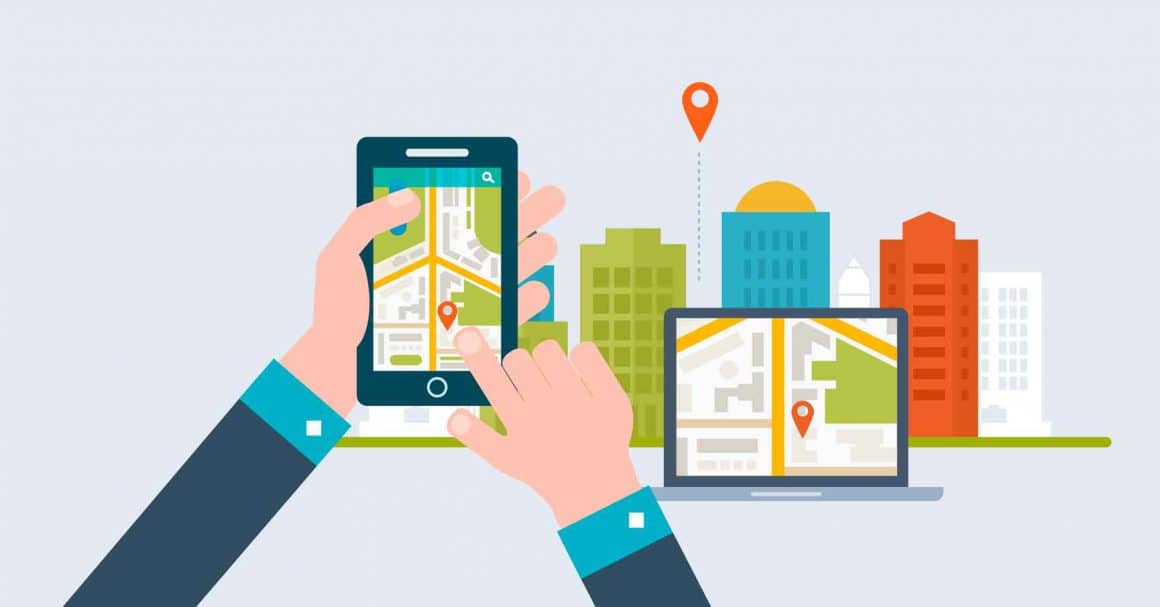 Despite a tumultuous 12 months which has seen our property markets suffer from COVID-induced dips to recording new high peaks, in the last 12 months 218 markets joined the million-dollar club.

CoreLogic’s Million Dollar Markets report released on Friday revealed 892 Australian property “markets” had a median value of $1 million or more over the 12 months to May 30, an increase of 218 markets in a year.

The report also highlights how the current housing market upswing has happened nationwide, with each capital city market and the ‘rest of state’ region recording an increase in values over the last 12 months.

Australia’s current housing boom has led to property value increases ranging from 5.0% across greater Melbourne dwellings to a 20.3% rise in values across Darwin, pushing a more vast range of markets up to, and beyond, the million-dollar mark.

While there are upsides to the current market boom in terms of wealth accumulation for homeowners, for first home buyers, who tend to be more price-sensitive, higher house prices and the volume of suburbs becoming million-dollar markets are likely building on the challenges already faced by these prospective buyers around homeownership and affordability.

The latest ABS finance data reinforced this, showing April marked the third consecutive month of decline in finance secured for the purchase of property by first home buyers.

Bellevue Hill houses in Sydney’s eastern suburbs was the most expensive market, with a current median house value of $7,616,288. Byron Bay houses are NSW’s most expensive regional market with a median value of $2,343,546.

In terms of million-dollar newcomers, houses in North Avoca on the Central Coast have deemed Sydney’s strongest newcomer with a median value now at $1,466,568 (up from $991,507 a year ago). 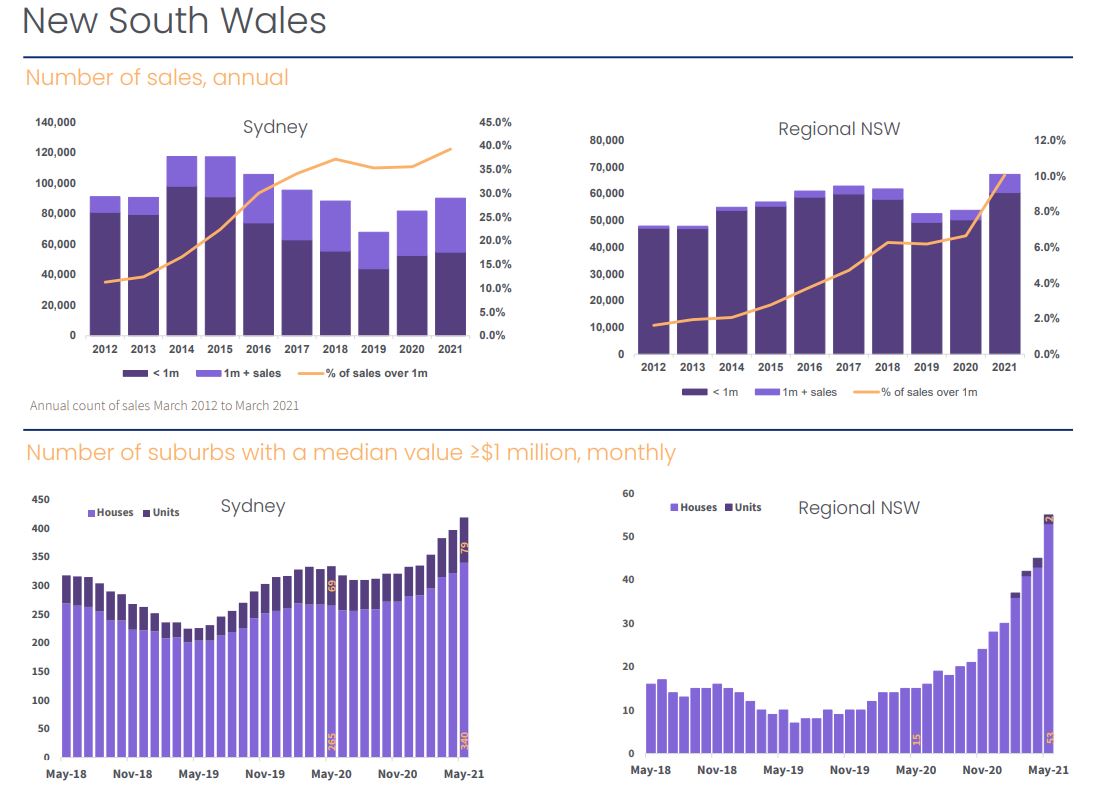 In Melbourne, there are 184 house and 8 unit markets with a current median value of $1m and above; 34.3% more than one year earlier.

Brighton is Melbourne’s most expensive house market with a median value of $3,316,986.

Connewarre came in with the highest median house value across Regional Victoria, with a median of $1,671,374. Queensland is the only state where the combined regionals have a similar number of million-dollar suburbs to its capital city.

There are 51 suburbs across Brisbane with a median house value of at least $1m, compared to 46 house and unit markets across regional Queensland, driven by the popularity of the Sunshine Coast and Gold Coast.

Teneriffe is Brisbane’s most expensive house market with a median value of $2,063,937.

This is only slightly higher than the highest median house value across regional Queensland, held by Sunshine Beach on the Sunshine Coast at $1,924,577. 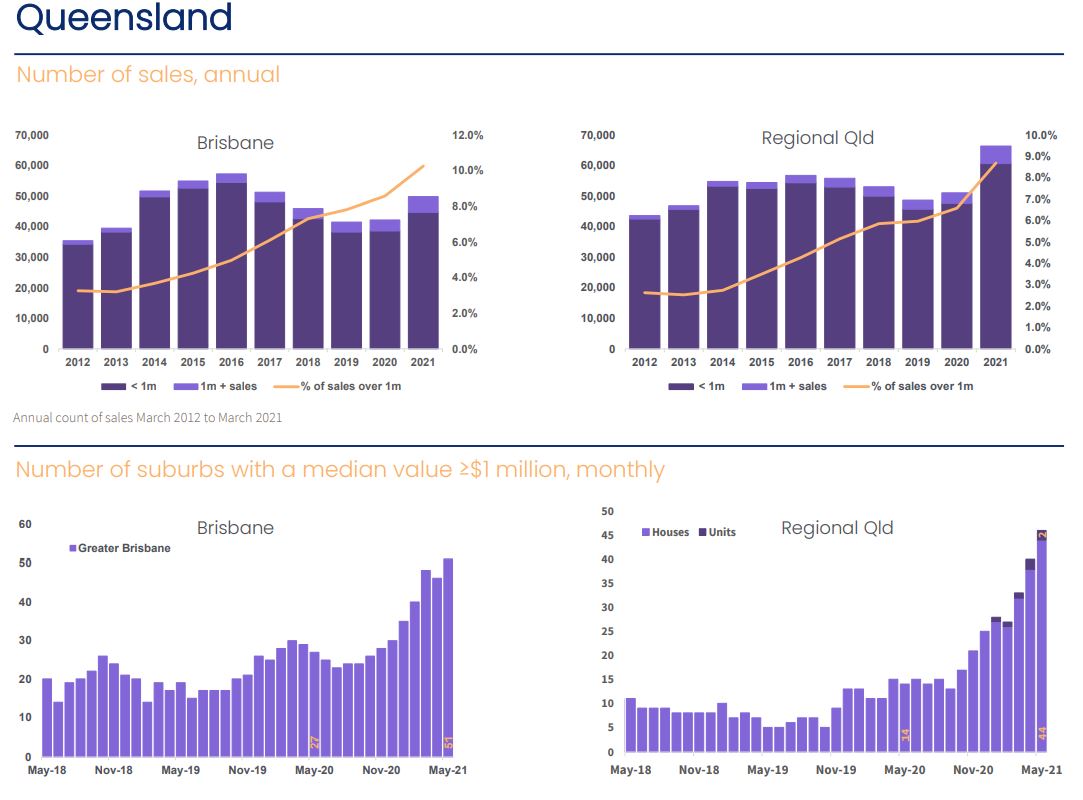 Only one house market across regional WA made the million-dollar club. Yallingup in the Bunbury region boasts a median house value of $1,258,355. Adelaide currently has 45 markets with a median house value over $1m, more than double the number from a year earleir. 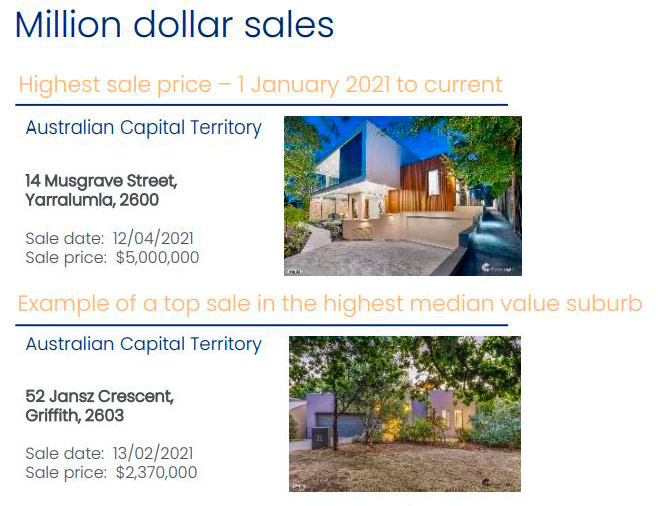 There are two markets across Hobart with a median house value of at least $1m, but no newcomers in the past 12 months.

Battery Point is Hobart’s most expensive suburb, with a median house value of $1,336,528.