Bloomberg recently produced an amazing chart set of countries with the most disposable income and what an amazing result for Australia.

See what I mean… 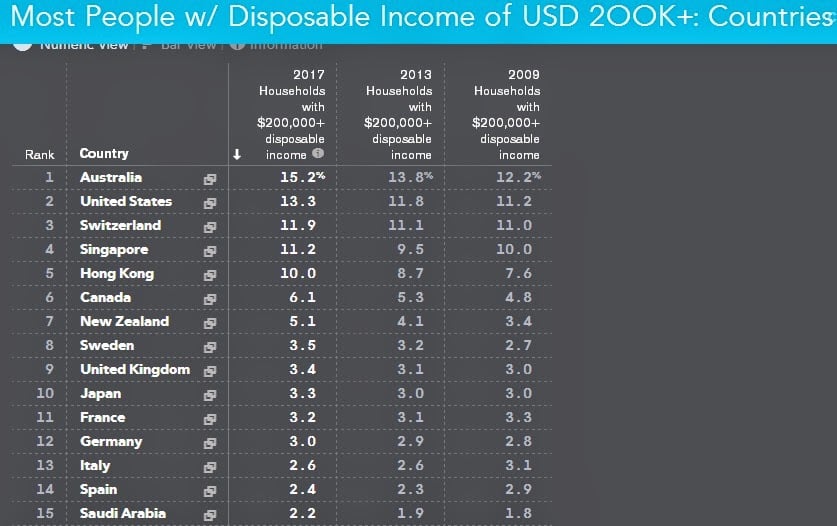 Australia is a country which is fast becoming spoiled for its high incomes.[sam id=40 codes=’true’]

What would now be really fantastic to see would be Australians embracing charitable giving with the same zeal that America has done previously.

In the past, Aussies have perhaps been seen as poor relations to other countries, but since this is no longer the case, we should now be more generous to less fortunate regions of the world.

Andrew and Nicola Forrest were the first Aussie billionaires to sign the Giving Pledge.

As for how we fare on other metrics, Bloomberg has Australia ranked as #1 for most organic farmland and #1 for having the highest minimum wage.

We are also ranked at #3 most decadent country, #6 for longest lifespan in the OECD and #7 for highest salaries in the OECD.

Happily we are also only ranked at #50 for unemployment, despite what people would try to have you believe (we’ll probably move up a notch to 40-something as the data rolls through to March 2014).

There is one area we need to work on, however, and that is that thanks the widespread availability  and consumption of junk food and increasingly sedentary lifestyles, Australia now ranks #3 for heaviest adult population, behind the US and New Zealand.