We’ll be glad to see 2020 behind us, but at least more Australians are putting their credit card debt behind them at the same time.

Australians have wiped a staggering $7.31 billion off personal credit card debt this year.

This brings the total reduction in credit card debt accruing interest for personal and business to $7.68 billion since January.

And at the same time Australians are drowning in cash, having stashed more of their cash in the banks.

Household deposits with financial institutions it up almost 12% over the year as Aussies have rapidly amassed close to $100billion in total savings as a buffer against the COVID-19 recession.

In September alone $16.5billion flowed into bank deposit accounts and since the pandemic household deposits are up a cumulative $99.5bn (or 10.1% on Feb 2020 levels ).

Putting both of these factors together is setting up many Australians for a better Christmas with less lingering debt. 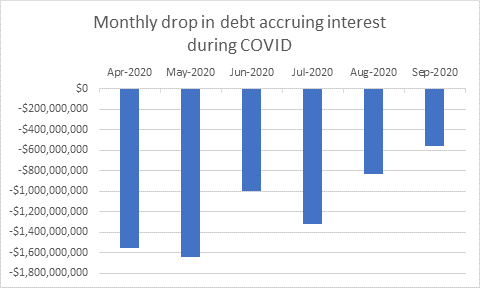 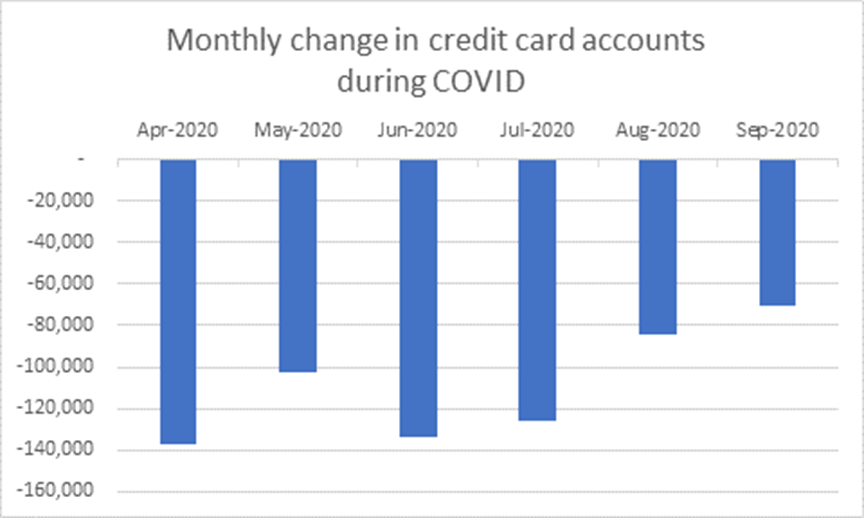 Canstar’s finance expert, Steve Mickenbecker says while most cardholders have been paying down credit card debt, there was still 1.12 million cash advances in September showing some are resorting to cash advances to get by.

With fewer spending opportunities, Australians are pulling the plastic out of pockets less frequently and paying off credit card debt. The pandemic has been a time for saving.

Some of the debt reduction will have come from the COVID-19 superannuation release, a false economy in the long term if people allow themselves to fall back into credit card debt.

One is paying off debt, cancelling cards and using fewer cash advances. The other is taking out cash advances – people who are still running up debt look to be doing it faster and to pay the bills.

Australians have made strong headway in 2020 when it comes to paying down debt and with tax cuts coming into play we could see debt fall even further and hopefully less people turning to cash advances as a last resort.

Sally Tindall, research director at RateCity.com.au, said it was good to see so many Australians paying down their debt during the pandemic.

“Australians have cleared $6.91 billion off their credit cards since COVID hit in March, saving some families hundreds of dollars a year in interest,” she said.

“While the pace at which we’re clearing our debt has started to slow, we expect the debt accruing interest to fall below $20 billion next month as tax cuts start to make their way through to people’s pay packets.

“Credit card spending rose in September as people were clearly out shopping more and putting more on their cards. The question is whether they are going to continue to be diligent in paying down their debts.

“With Christmas just over six weeks’ away, some people will be tempted to give their card a workout at the shops.

“If you’ve focussed all year on clearing your credit card debt, try and resist the temptation to blow the budget this Christmas. Otherwise you could find yourself back to square one in the New Year, struggling to pay down high-interest debt,” she said.

'Credit card debt slashed by $7.68 billion this year' have no comments