The best leading indicators and surveys all seem to point a significant downturn in construction and related trades and materials employed.

Interestingly, though, the detailed quarterly employment figures from the ABS showed total construction employment holding up at 1.2 million, or some 9 percent of the employed labour force.

Here’s Commsec with the summary statistics: I wrote in a 2018 report why construction employment must inevitably fall from record highs, but it apparently hasn’t happened a widespread basis just yet!

Sentiment is picking up gradually for new property, so it’s a bit of a race against time: how quickly can new projects be funded, and will this happen fast enough to head off the worst of the slump?

When I appeared on the Devils & Details podcast in the first half of 2018, David Scutt made the point that amongst the smart brains around town there was no belief in the Reserve Bank’s commitment or forecasts for stronger wages growth and inflation.

The problem, suggested Scutty, is that in promoting the importance ‘financial stability’ instead of committing to the inflation target there was a chance of the economy losing momentum, in turn creating a greater risk.

19 months on and the slower economy is now upon us, unemployment is rising, wages growth has ticked lower, and inflation still isn’t expected to hit the target throughout the entire forecast period.

Meanwhile the government remains doggedly committed to delivering a surplus.

Onto the detailed ABS figures, and the annual average unemployment figures are now drifting steadily higher in Sydney and Melbourne.

Everywhere else they’re way too high, with the other state capitals all above 6 per cent. 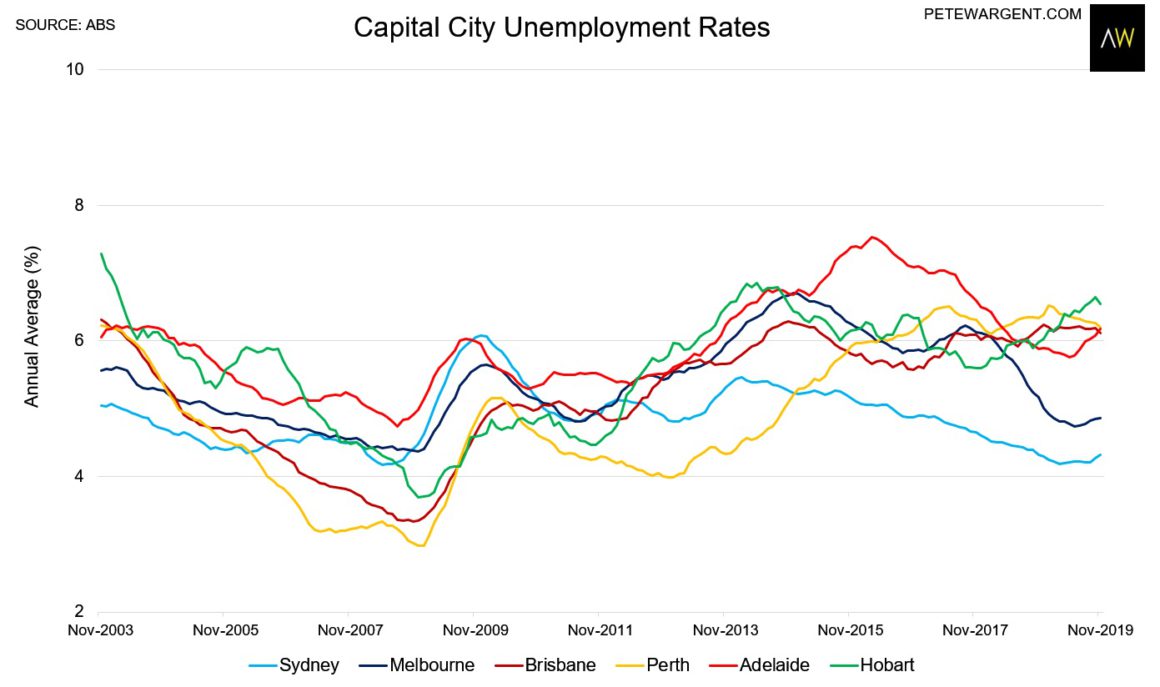 Sydney has had an unemployment rate as low as 4 per cent, yet there was still no indication of robust wages growth, and unemployment is now rising again as construction slows. There was a bit of excitement about a jump in jobs growth in November, but looking through the monthly noise the 3-month average employment growth was soft, and the annual pace of growth is fading.

The way things are, it seems a fair bet that even an unemployment rate of 4 per cent wouldn’t lead to wages growth overheating (ha), which implies that perhaps 165,000 of those 708,000 unemployed need not be. 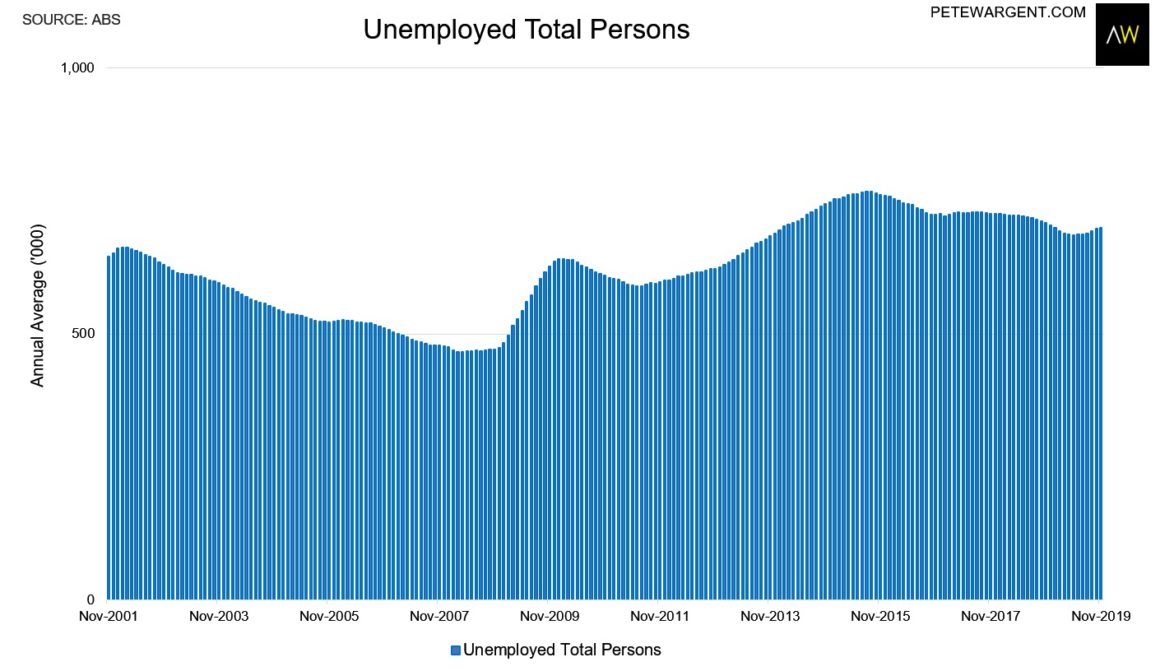 And that’s before anyone mentions the trend underemployment rate at 8.4 per cent.

Looking around the states, the number of unemployed persons has been drifting higher in New South Wales and Queensland, while the economy of the Northern Territory is shrinking painfully. 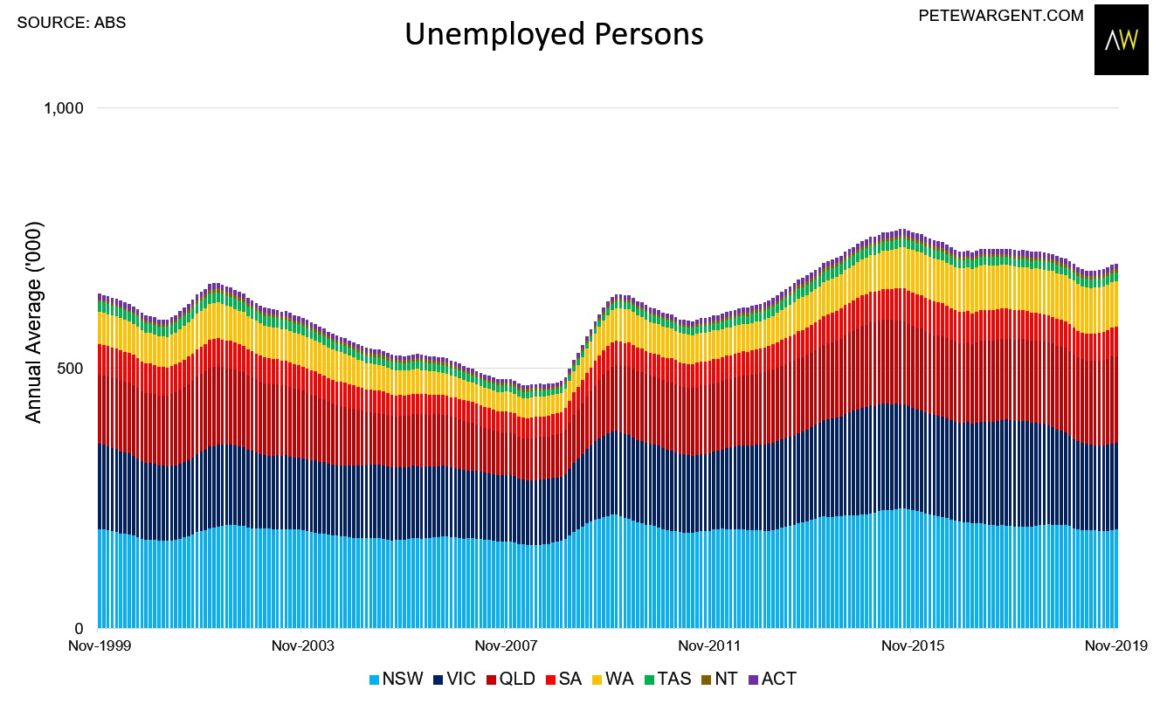 The median duration of job search has improved year-on-year in New South Wales to 13 weeks, but this was offset by a deterioration almost everywhere else except in Tasmania. 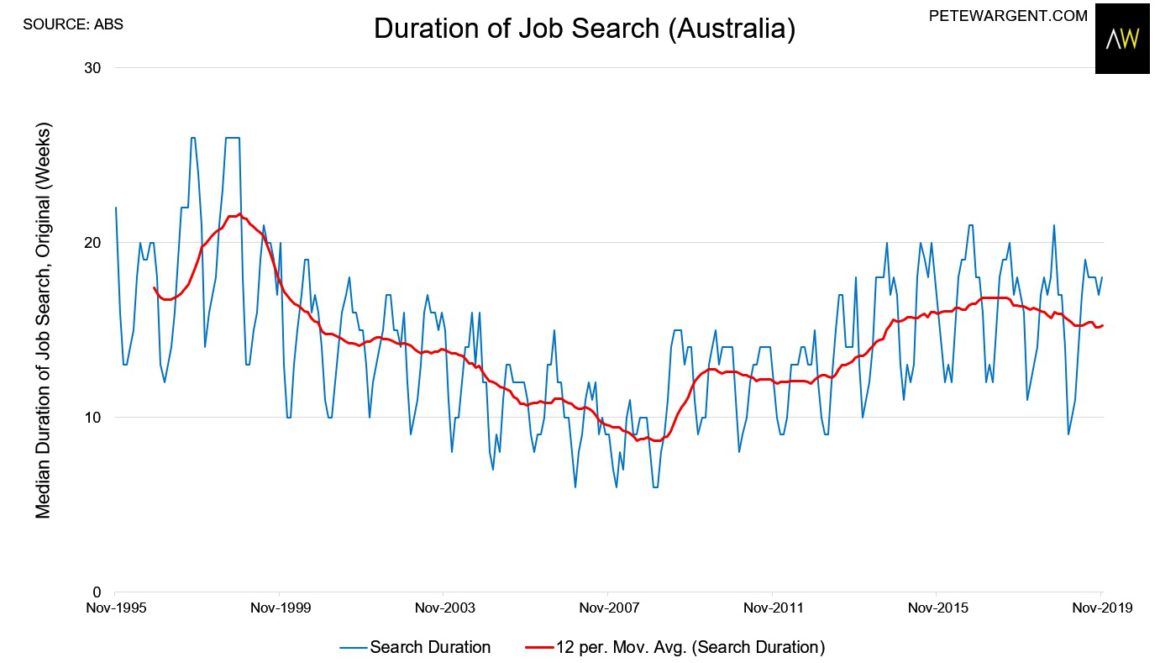 In South Australia and Western Australia the duration of job search in November 2019 was 30 and 31 weeks respectively.

There also hasn’t been a great deal of joy lately in resources regions in terms of wages growth or falling unemployment. 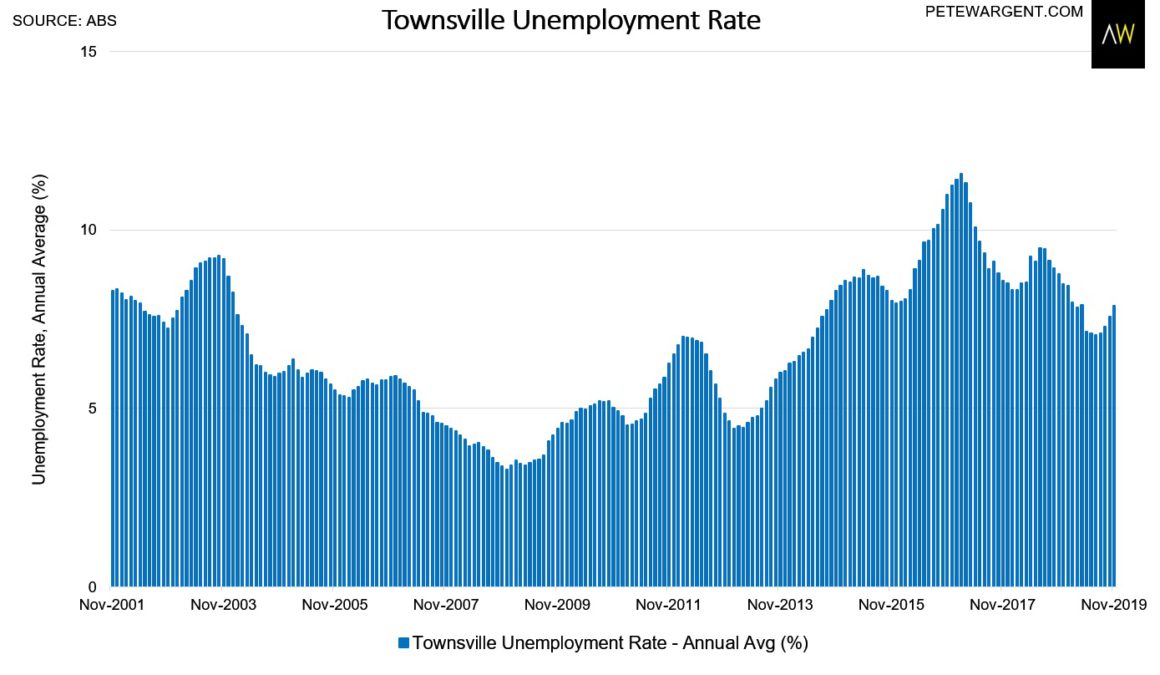 The race is on…

Overall, the jump in employment in November mainly just reversed a negative result in October, and the trend for unemployment looks likely to be heading higher in 2020 as construction slows.

Job advertisements have fallen to the lowest level in 4 years, but since policy works with a lag the hope is that rising housing prices will eventually lead Australia across to the other side of the slump.

'Construction downturn yet to bite' have no comments