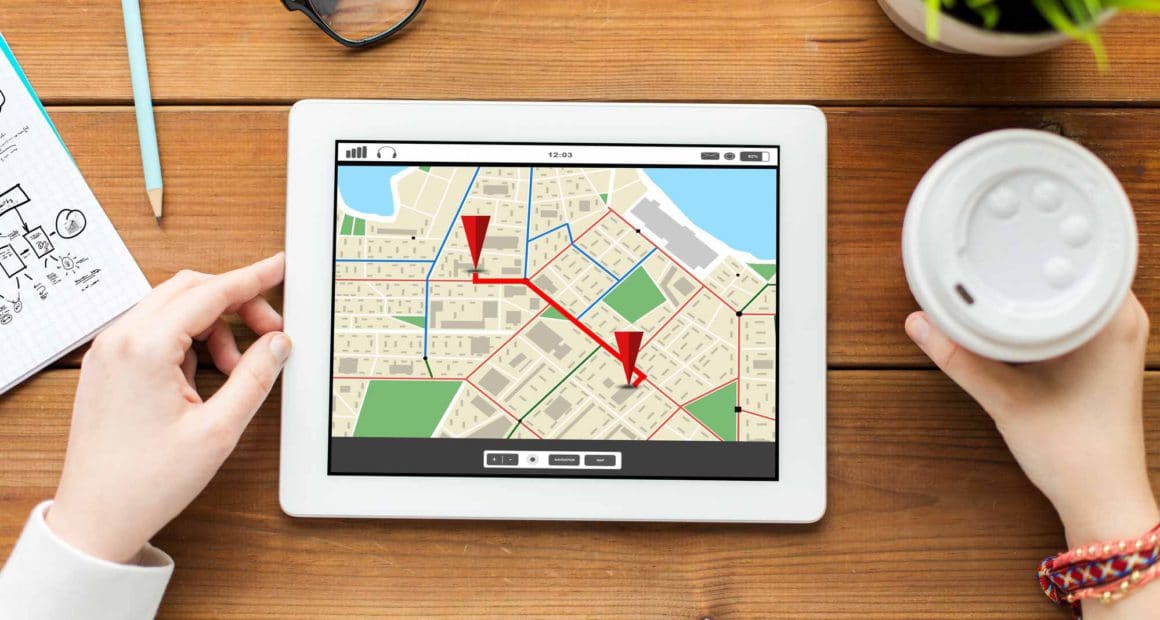 Want to know where Australian property sellers are the happiest?

National research by RateMyAgent  revealed that Aussies across the country are rising in happiness.

It's not surprising that seller satisfaction has doubled nationwide - being indicative of the steady upturn in the property market.

This rapid increase was led by an explosive recovery in metropolitan Melbourne and Sydney, with both cities’ satisfaction rates rising five to six times higher between December 2018 and December 2019.

As you can see form the lust below, Victoria dominated the happiest area list: 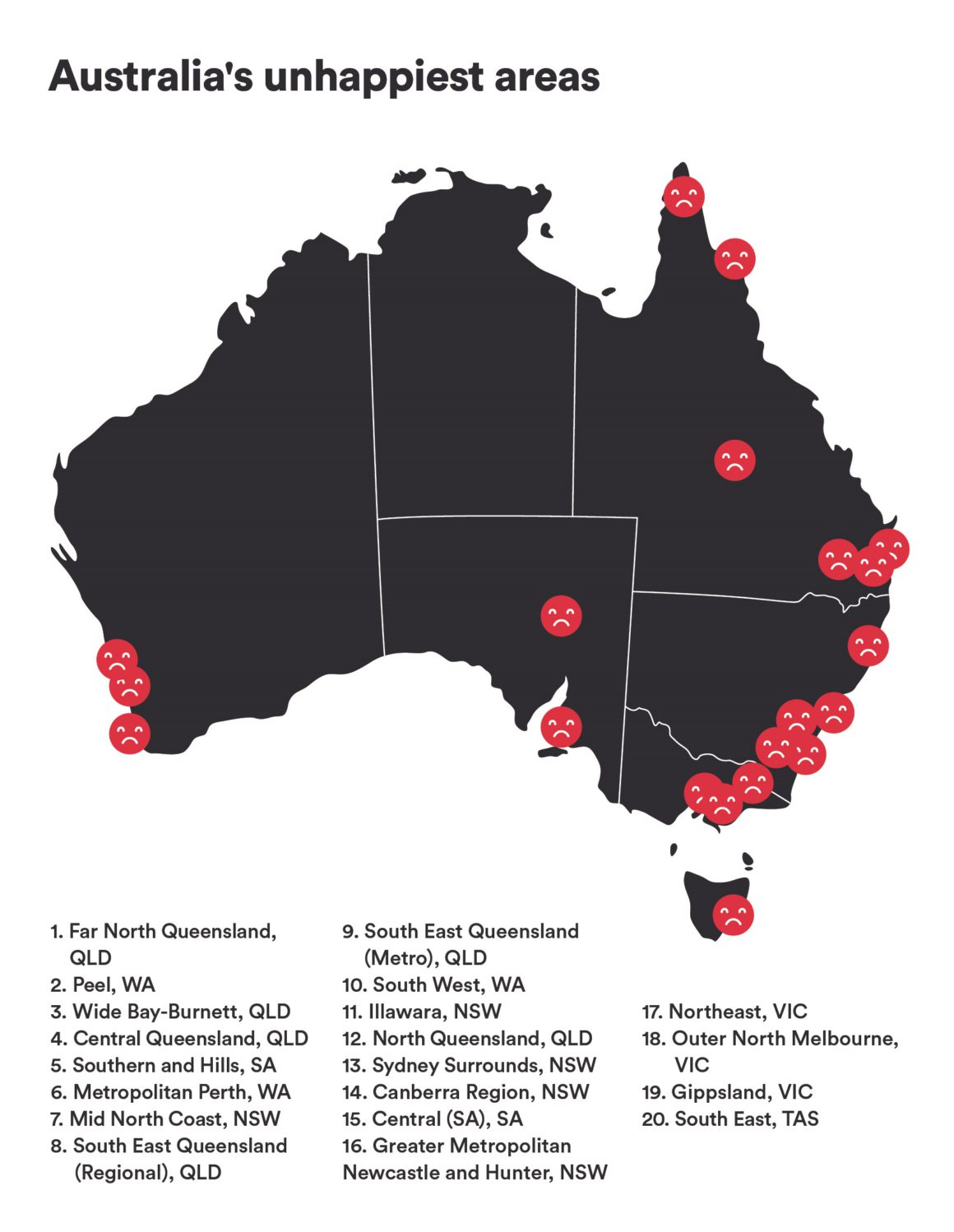 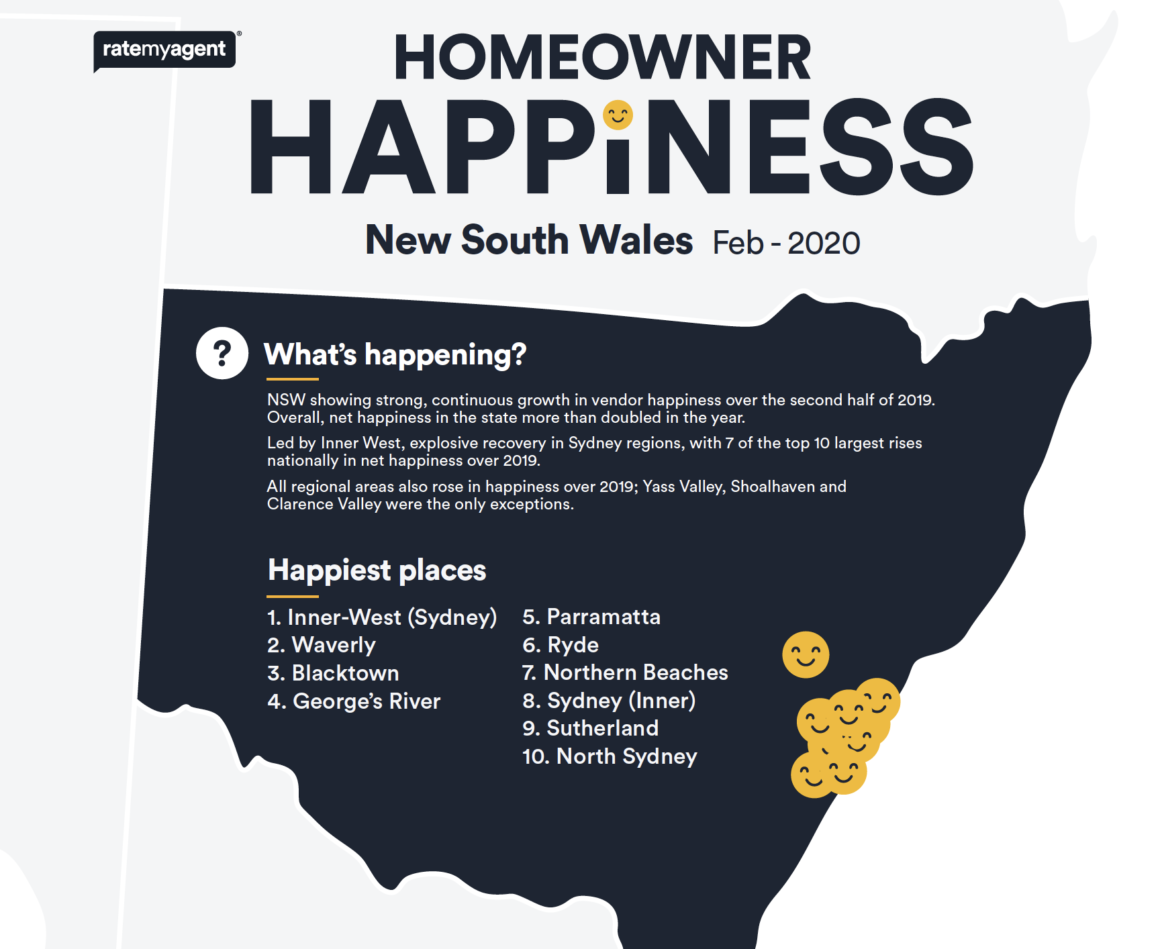 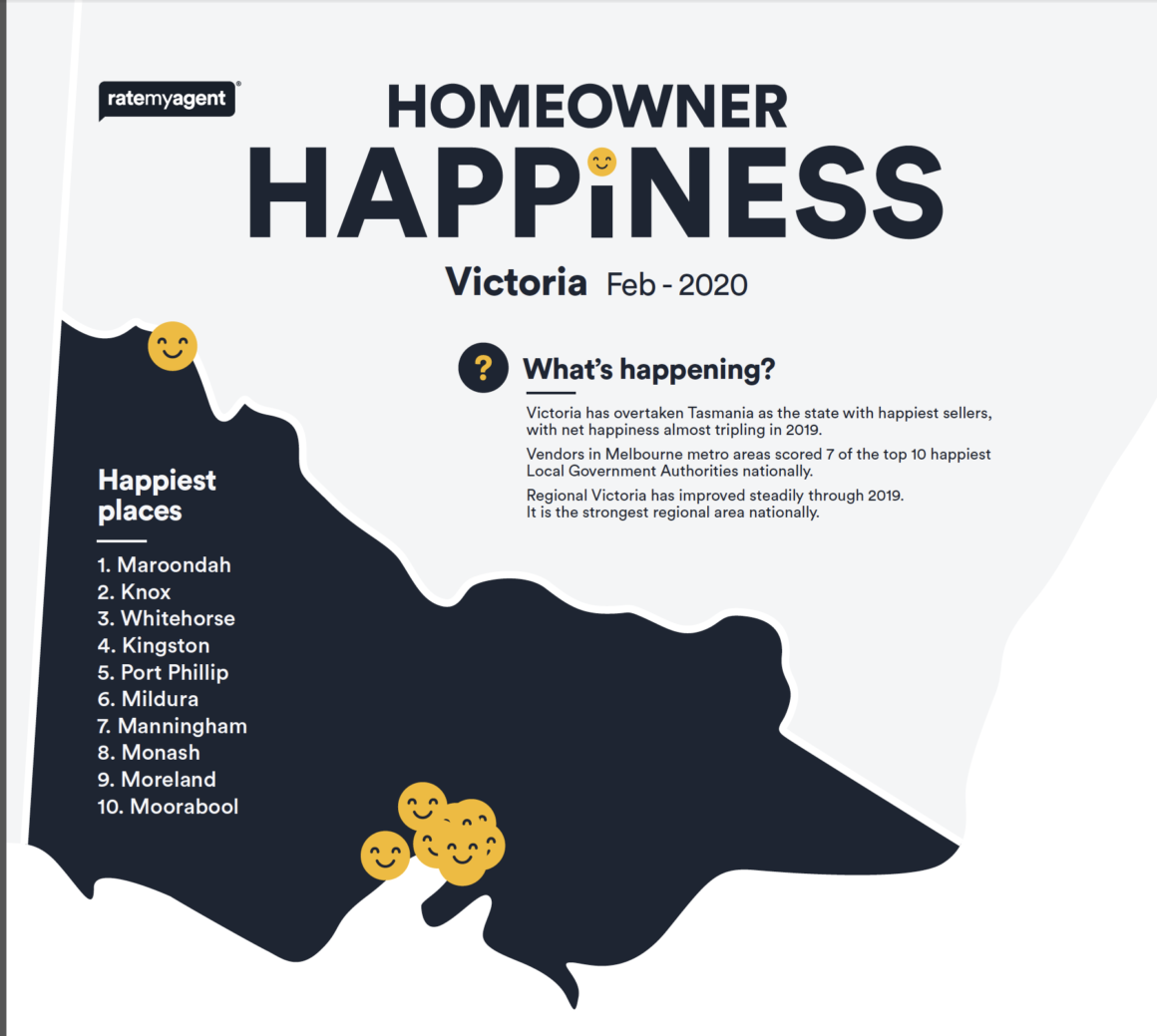 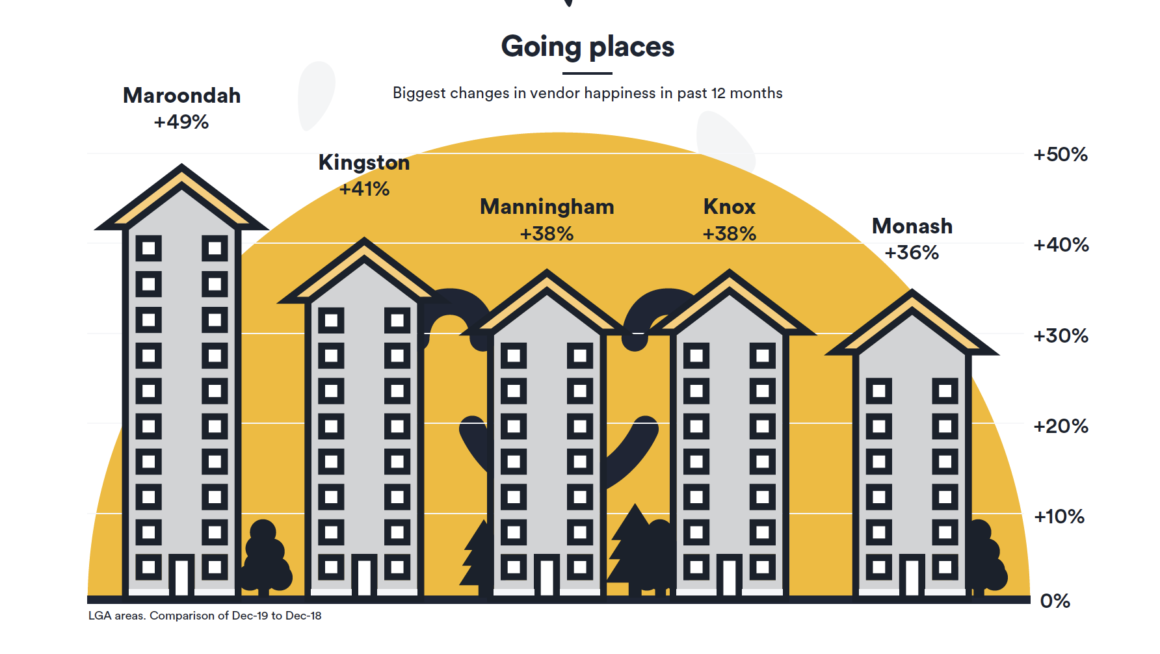 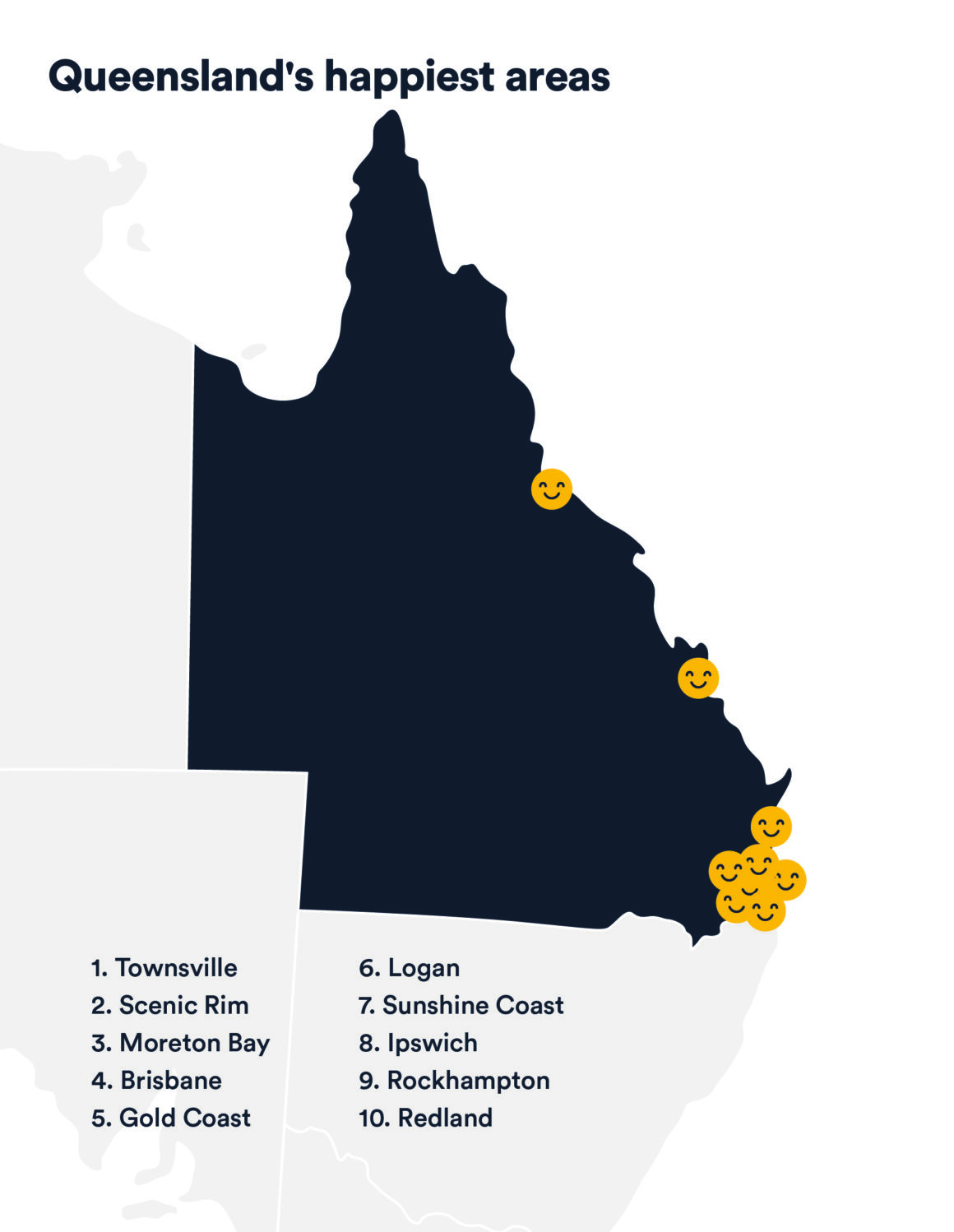 “Our Price Expectation Report shows just how far the property market has recovered, with happiness doubling in the year nationally, strong gains in metro areas and a surging Victorian market leading the charge. As we look to the year ahead there are plenty of reasons for optimism.”

As the market recovers from a significant slump in December 2018, overall vendor happiness nationwide is on a steady month-on-month upward trajectory. A 12-month peak in happiness is being seen nationwide, but perhaps most significantly, across the Victorian market, with the state (55%) overtaking Tasmania (51%) this quarter as Australia’s happiest state.

“Buyers in Victoria are excited. Melbourne has the second highest median house price in Australia and this is causing buyers to venture to Melbourne’s fringes – something which is undoubtedly accelerating growth in these areas. Here, buyers have so much more opportunity to purchase a quality home for a fraction of what they would otherwise be paying,” said Adam Sacco from Leading Real Estate.

Closely following are New South Wales (50%) and Australian Capital Territory (48%). Falling to the bottom of the ladder are South Australia (42%), Queensland (38%) and Western Australia (33%).

Taking out the title of Australia’s happiest region is Southern Melbourne, reaffirming a strong surge in vendor satisfaction across metro Australia. 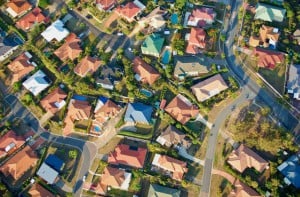 In the Top 20 happiest places nationally, Victoria has taken out the most regions (11), followed by New South Wales (seven) and Tasmania (two).

Edged out of the top 20 are Queensland, South Australia, Western Australia and the Australian Capital Territory – all of which missed a ranking in the top 20 areas.

The report went on to find net happiness levels have improved across all states – including Western Australia, currently sat at the bottom of the leaderboard – and across all property values in both metro and regional areas, highlighting a positive upturn in the Australian property market.

RateMyAgent provides reviews, ratings and rankings for real estate agents in Australia and New Zealand. The website’s 750,000 verified reviews are attached to the property listing to which they relate, ensuring that the information provided is unique to the agent and from a genuine property seller or buyer.