Discover why the rich keep getting richer and how you can join their ranks.

This book is for everyone who wants to secure their financial future but is unsure exactly what to do.

Two leading world experts have joined forces to teach you how to walk in the footsteps of the wealthy.

Drawing on the proven strategies of Michael Yardney, Australia’s leading authority on the psychology of success and wealth creation, and American co-author, Tom Corley, whose internationally acclaimed research on the daily habits of the rich and poor has changed the lives of hundreds of thousands of ordinary people around the world.

This book is your chance to learn the specific Rich Habits you must have in order to succeed as well as the Poor Habits that you must avoid at all costs. 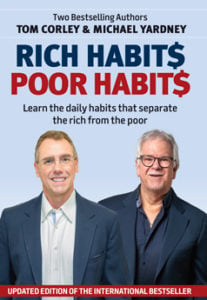 Two best-selling authors, one message:  We want you to be rich

This book debunks the myths and “common wisdom” about how to get rich.

Read it to unlock the secrets to success and failure, based on Tom Corley’s five years’ study of the daily activities of 233 rich people and 128 poor people as the authors expose the immense difference between the habits of the rich and the poor.

While Michael Yardney is best known as a property expert, he is also Australia’s leading expert in the psychology of success and wealth creation.

Michael’s wisdom stems from his personal experience and from mentoring over 2,000 business people, investors, and entrepreneurs over the last decade.

His opinions are frequently quoted in the media and Michael was once again voted Australia’s best property investment educator and mentor. Over the years he has probably educated more successful property investors than anyone else in Australia.

Tom Corley understands the difference between being rich and poor: at age nine, his family went from being multi-millionaires to broke in just one night, due to a catastrophic fire that destroyed his Dad's thriving business.  For fourteen years they struggled with poverty. There were eleven in Tom's family, and they lived in constant fear of losing their home.

Driven by the desire to unlock the secrets to success and failure, Tom spent five years studying the daily activities of 233 rich people and 128 poor people.  He discovered there was an immense difference between the habits of the rich and the poor. During his research, he identified over 300 daily activities that separated the “haves” from the “have nots.”

Tom now travels the world, sharing his Rich Habits and motivating audiences at industry conferences, corporate events, universities, multi-level marketing group events, and global sales organizations’ presentations and finance conferences.  He has even spoken on the same stage with famous entrepreneurs and personal development experts, such as Sir Richard Branson, Robin Sharma, Dr. Daniel Amen, and many others.

Tom is also a CPA, CFP, and holds a master’s degree in taxation. As president of Cerefice and Company, CPAs, Tom heads one of the premier financial firms in New Jersey.

For more tips on wealth creation through property investing, see the rest of Michael Yardney's books.

HOW TO PLACE YOUR ORDER

Our Online Store is a secure site. All information you send and receive is encrypted using the highest possible level of website encryption. We use internationally recognized security and payment methods (Verisign).

To purchase this book, click on the "Add to Cart" button. You will be taken to our shopping cart. When you have finished shopping, click on the "Proceed to Checkout" link at the bottom of the cart screen and follow the on-screen instructions to complete your order.

Delivery is by Australia Post. We accept Visa and Mastercard for your convenience.