These are the latest findings from the Roy Morgan Single Source survey of over 50,000 people pa, of which over 34,000 have superannuation.

Although Roy Morgan measures the mean and median balances for superannuation, it is more meaningful to consider the median value — which is more representative of the market, as it is not distorted by extremely high balances.

The current median value of superannuation held by women is only $35,200, which means that half have balances below this and half above. 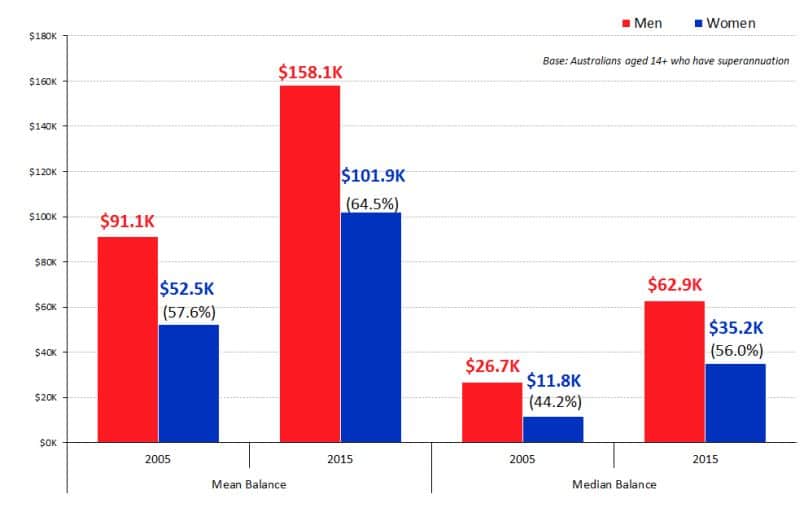 Women trail men in superannuation across all age groups

Age is a major determinant of how much someone has in superannuation, with balances increasing as people head towards retirement.

Men, however, are well ahead of women across all age groups up to 65+. 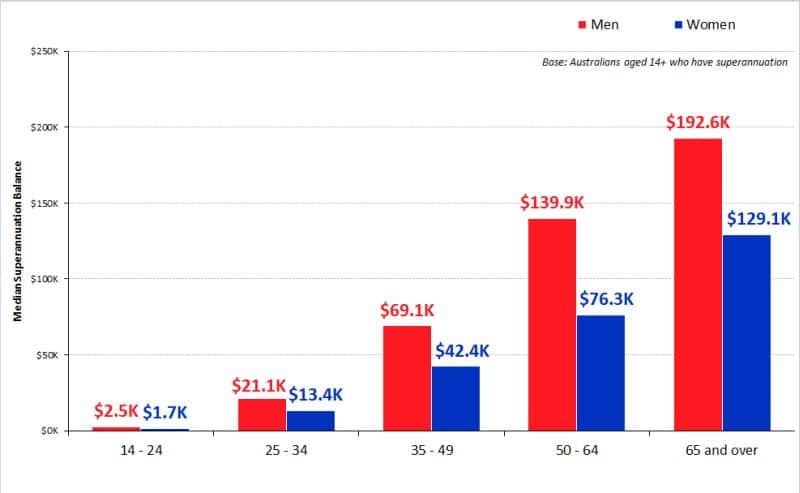 This is not only a major gap (over $63,000) in favour of men but indicates that the majority of this age group overall are not well prepared for retirement.

These figures further indicate that there is a major deficiency in retirement funding from superannuation.

Satisfaction with financial performance of superannuation is key

Attracting and retaining superannuation customers depends to a considerable extent on investment performance and associated fees.

Our research shows that these are a major reason that people switch to self-managed super funds in particular.

To increase the superannuation balances held by women at the brand level, it is necessary therefore to measure how satisfied they are with the financial performance of their fund relative to others.

The following chart shows that women are clearly the most satisfied with the performance of self-managed super funds (78.8%) and Q Super (72.7%). 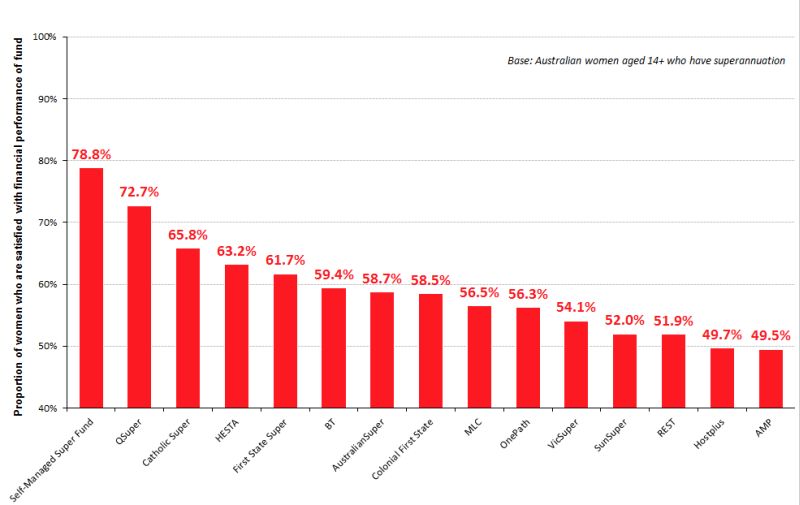 While the average level of super-fund satisfaction among women is 57%, a number of major funds fall noticeably short of this average.

“With considerable publicity being given recently to the gap between men and women in regards to superannuation balances, it is quite encouraging that we have seen a gradual narrowing of this gap over the last decade.

However, a major issue still remains, in that women hold less than two-thirds of the average value of super balances held by men — and only 56% if we view super balances in terms of median value.

Obviously, several factors are helping to close the gap, such as the gradual impact of the compulsory super scheme, higher levels of education for women, increased awareness of the issue, increased work-force participation and a trend towards self-managed  super.

However, the gap is narrowing very slowly, and more definitive action is probably needed.

Although we see that super balances increase with age for men and women, it is concerning that women have much lower median balances across all age groups.

This makes it very difficult for women to catch up by retirement age.

Furthermore, a serious problem exists for both sexes with regards to inadequate funds from super for retirement.

Despite the fact that superannuation performance tables are produced from a number of sources and published periodically, fund members’ behaviour will ultimately be determined by how they feel their fund is performing.

Our results show that a number of major funds are not meeting the expectations of their female members, which will make retaining and attracting funds more difficult.”

See the original article at roymorgan.com

'Women remain well behind men in superannuation balances' have no comments