A bout of pessimism is sweeping Australia and if it continues it may have a negative impact on our property markets.

According to a  survey, published in The Australian, almost one-third of Australians believe their standard of living will get worse by Christmas.

At the same time barely one in 10 expect their fortunes to improve by the end of the year. 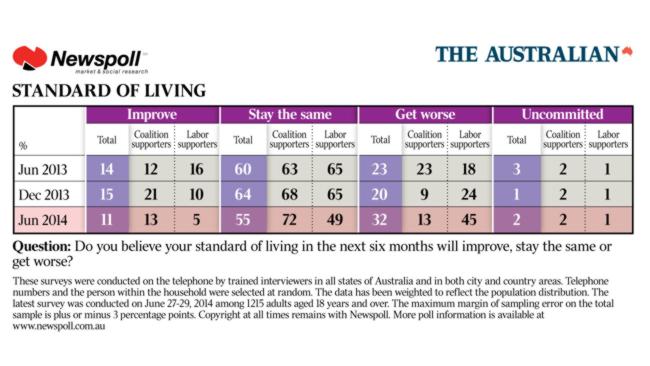 Worst time since the GFC

The rise from one in five expecting their standard of living to get worse to almost one in three is the biggest deterioration in the measure since June 2008, on the eve of the global financial crisis, when it soared from 18 to 43 per cent.

At the same time Newspoll reveals the number expecting an improvement in their standard of living has fallen from 15 per cent to 11 per cent — the lowest level since 1986.

I understand this survey was taken after the recent Horror Budget but before the recently announced increase in the national jobless rate which rose to a 12-year high of 6.4% and the announcement that the number of unemployed at the highest level in 17 years.

You see…when people feel confident and secure in their jobs they’re prepared to spend money; and when they don’t feel secure they tend to stash their cash.

This is even more relevant to significant purchases such as property, and that’s why I feel that this bout of pessimism could have a short term easing effect on our property markets.

Don’t get me wrong.

If you have a secure job and financial buffers in place now maybe great time to upgrade your home or buy that next investment property while these short term influences affect our property markets.

By the way I haven’t noticed a significant drop in confidence in our major property markets yet. Sure growth has slowed a little – it had to, but there is still strong demand from over occupiers as well as investors in the areas the team at Metropole specialise in.

As I said I only see this is a short-term lull.

The long-term influences of low interest rates, a rising population, more people wanting to live in the same locations and a slowly improving economy should support property price growth in the long term.

'Will our property markets slow down before Xmas?' have no comments