Some are wondering whether this will lead to a  recession. 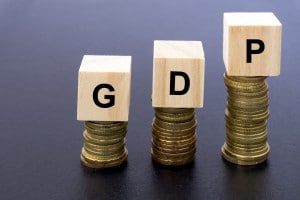 Maybe things are not as bad as some commentators suggest.

Dr Andrew Wilson, chief economist of MyHousingMarket.com.au explains that we experienced a “subdued but reasonable result” with government expenditure and exports supporting our economy.

Watch us discuss how the latest national accounts data show that Australia has recorded very weak economic growth – GDP growth slowed to 1.4 per cent in the year to June, well below the federal government’s May 2019 Budget forecast of 2.25 per cent growth.

By way of comparison, the economy grew 1.7 per cent during the 2009 Global Financial Crisis.

The RBA recognised our economy was in poor shape.

In his statement on Tuesday before these figures were released Reserve Bank governor Philip Lowe reiterated that economic growth will improve “gradually”.

He noted that although new housing construction activity remains weak, there are signs of an upturn in the established housing market.

“Economic growth in Australia over the first half of this year has been lower than earlier expected, with household consumption weighed down by a protracted period of low income growth and declining housing prices and turnover,” he said.

“The main domestic uncertainty continues to be the outlook for consumption, although a pick-up in growth in household disposable income and a stabilisation of the housing market are expected to support spending.”

The RBA’s decision to leave official interest rates on hold in September coincided with the release of data confirming Australia’s first current account surplus in 44 years.

The surplus of $5.9bn for the June quarter, showed we exported considerably more than we imported.

Export volumes for the key bulk commodities of liquid natural gas, coal and iron ore were up, while volumes fell across several import categories resulting in an increased June quarter trade surplus.

This month the RBA decided to leave the cash rate unchanged at 1%.

Reserve Bank Governor Philip Lowe made a number of interesting points in his statement explaining their decision:

It looks like the RBA is going to be challenged by its forecasts and it will take a couple of years before it can get inflation to within this target range and unemployment down to the levels it is hoping for.

Interestingly lower interest rates haven’t stimulated employment or significant economic growth overseas, so they are not likely to have the result the RBA hopes for here either.

We like to keep an eye on consumer confidence because it is a key determinant of consumer spending moving forward.

'Will our lower GDP lead to a recession? | PROPERTY INSIDERS VIDEO' have no comments