AUSTRALIA has roughly “six weeks” to prevent a housing market collapse caused by the banks’ crackdown on foreign investment, a US-based security think tank has warned, according to a News Limited press report.

Quite clearly, you can tell from the website of the think tank, the International Strategic Studies Association, are not exactly experts in the field of Australian housing.

As I tweeted out yesterday, if we are truly six weeks away from a national housing crash, why are most leading indicators such as auction clearance rates and total real estate listings suggesting otherwise?

And surely we would also be already recording a significant rise in non-performing loans?

The chart below shows that’s clearly not the case. Such loans, in fact, remain at low levels. 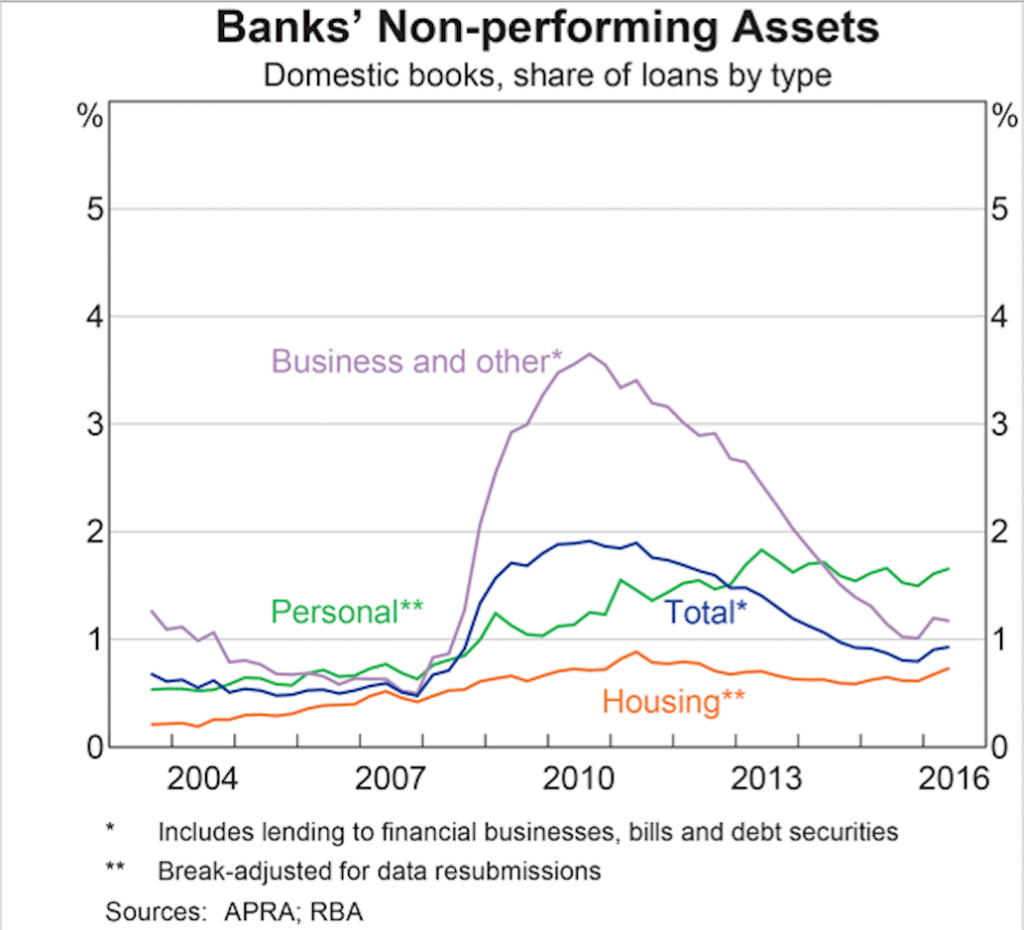 We pretty much have had from the time the national market started to rally in late 2012, a pile of market bears declaring the imminent crash of the Australian housing market.

They are, what I call, the boys who cried wolf.

And one thing they all have in their favor is a media circus who will give them all a front page and reporters who rarely check their credentials, qualifications or their previous track records, which too often leave little to be desired.

I guess, in the above story at least, News Limited, who had the ‘exclusive’, asked for a counter view.

I am also pleased to say one very major television network opted out of taking the ‘story’ any further when they contacted the SQM Research office for its view.

More than this, I am convinced there is an industry of bear spruikers who earn a living preaching the end of the financial world, and for that matter, the demise of Australian housing.

Take this example from Harry Dent –   a very public figure who has repeatedly made trips to Australia preaching the end of our housing market.

No wonder he enjoys coming out here.

Not bad for a day’s pay!

I’m sure if I were to dig deeper into a number of these very public bears, we would most certainly uncover a prosperous industry.

That is, so-called experts making big dollars out of preaching doom.

Now, I have always said that I have no problem with those voicing the risks in the Australian housing market.

There are indeed many risks, particularly those associated with the ever-rising level of household debt to GDP and what that would mean if our country just returned to ‘normal’ cash rate settings. That would indeed likely trigger a real rise in bad loans.

These risks need to be pointed out to all participants.

That, along with particular risks within the housing market, such as a clear oversupply of Brisbane CBD apartments, as the elevated vacancy rate highlights.

And for that matter the ongoing collapse of the Perth rental market, particularly in the Perth CBD itself, where the vacancy rate is over 8 per cent.

But it’s when I see headline-grabbing stories like the one above, with no follow up investigation, that I feel the public are been taken for a ride by sections of the media and by ‘experts’ out to grab a headline and maybe a quick buck.

There are many other ways our overvalued housing market may return to some sort of sense of fair value, which could include the very ‘boring’ scenario of underperformance for a very long time.

'Will Australia’s Property Markets collapse in 6 weeks?' have no comments