Our economics teacher at school once said to us: “Don’t be surprised if there’s a recession when you leave school.” He was a cantankerous old sod, and we just thought he was being antagonistic.

Unfortunately, he then died, so the poor chap didn’t stick around long enough to know whether his warning would come true.

What I now understand is that he was actually being realistic, rather than antagonistic. Recessions tend to come around surprisingly regularly in developed world economies, and perhaps the most surprising thing of all is…that we are still surprised when they arrive!

As it turned out, the US did fall into recession briefly in 1990-1, for after a period of high inflation and credit-driven expansion, the Fed jacked up interest rates, which capped growth.

In 1990, there was an oil price shock, which, after the lending boom of the 1980s combined with a fall in consumer confidence, ended in a sharp fall in growth and a recession.

Fortunately it was a short-lived affair and growth returned thereafter.

As Motley Fool once wisely said:

“There will be seven to ten recessions over the next 50 years. Don’t act surprised when they come.”

It’s one of the most famous quotes in Australian economics, and implies that sometimes economies actually need to have a recession to clean up the excesses of the past.

Of course, in an ideal world developed economies would continue with moderate growth in perpetuity, but it’s not what seems to happen in practice.

Often economic growth surges ahead at an irrational pace before reversing painfully.

The next Australian recession?

Will we be headed for recession in the near future?

Personally, I believe the answer is ‘probably not’, but economic growth will very likely slide as the investment phase of the mining boom seems to have passed its peak.

Despite the slowing economy to date, unemployment remains low at around 5.5% and GDP growth remains positive at 2.6%, although as noted this may well fall. 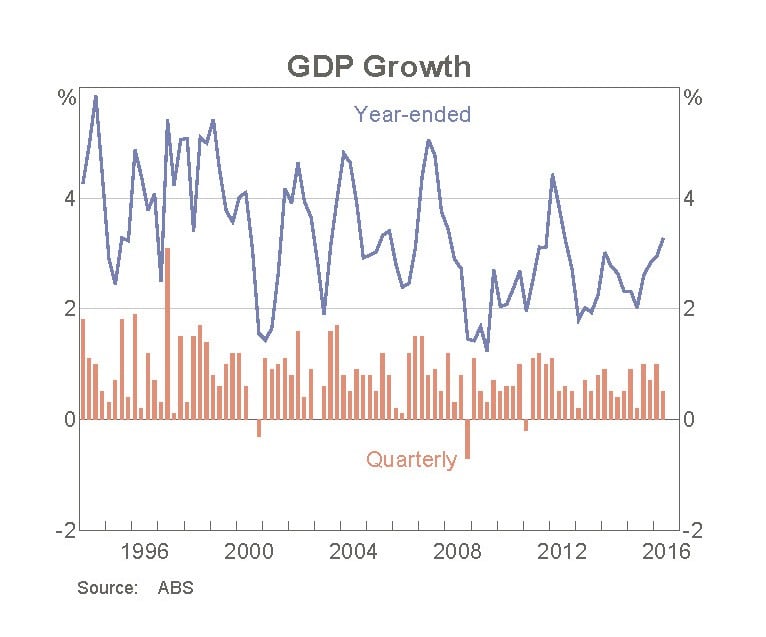 The Reserve Bank forecasts that its stimulatory monetary policy (record low interest rates) will see GDP growth continuing through 2013 and 2014, and a return to 2.5% to 4% GDP growth through 2015, which would be a tremendous result if it actually eventuates.

[sam id=35 codes=’true’]Of course, there is a chance of recession. It nearly always pays to be wary when a commentator says with absolute cast-iron certainty that “this will happen” or “such-and-such will eventuate.” The future is inherently uncertain and cannot be seen with such clarity.

If China suffers a major reversal and commodity prices fade, then Australia will be materially impacted, no question.

And of course, others will simply continue to predict a recession forever into the future. There’s nothing unusual in that either; people are always predicting doom and gloom, and – given that we haven’t had a recession for more than 20 years – one day they will again be right (and that’s one thing I can predict with certainty!).

What would a recession mean for investors?

For share investors, if Australia sinks into recession share price valuations will naturally likely recede into single digit PE ratios. So you either need to have an investment plan which sees you selling your holdings before valuations fall that low again (timing the market), or you need to be employing a strategy which allows you to pick up more holdings when prices are once again low and shares are ‘on sale’.

One unfortunate consequence of Australia not having had a recession for more than two decades is complacency with regards to property market commentary. Some commentators continue to talk about persisting very high levels of growth, but very high growth cannot continue forever, and if a genuine bubble forms then it is likely that it would eventually burst.

Australia has avoided for recession for so long commentators often have little or no context for considering what happens to property markets in a genuine recession.

When Australia does again see recessionary times, you absolutely do not want to be holding properties which are in low demand, which often includes remote outer or fringe suburbs, and many regional centres.

Such areas can perform reasonably enough when the market is on the up, for a “rising tide lifts all boats”, but one reason that prices remain cheap is that when recessions do come along to clean up the excesses of the past, owners of illiquid property in low demand can experience a drawn out and devastatingly painful slow-motion deflation in prices.

Trust me, I’ve seen it happen to plenty of people before: I’m British.