Many young Australian families are having difficulty getting a foot on the rungs of the property ladder and the common catch cry is “property is unaffordable.”

Some blame the high cost of housing on greedy developers while others blame ugly wealthy property investors using tax dodges like negative gearing.

But is that really the case?

There is no doubt housing is our capital cities is expensive, but is it really unaffordable? Let’s do a quick Q&A.

[Note: there is some crackling sound on the video at the beginning, but this disappears after a few seconds]

Why are house prices so high?

House prices are obviously made up of the land component and cost of the dwelling on it.

The cost of building a new house has hardly moved (in inflation adjusted terms) over the last 20 years, however land prices have skyrocketed.

By restricting the amount of land available on the urban fringes of our cities, in part to cap urban sprawl and the associated costs of building infrastructure, State Governments have sent the price of entry-level housing through the roof.

Research from the Centre for International Economics, commissioned by the HIA found that Sydneysiders paid about 44% (or an average of $268,000) in various taxes when they built new homes. This figure was about 36% or $191,000 in Brisbane and in Melbourne tax accounted for 38% of the cost of new homes.

In other words new housing is one of the most heavily taxed sectors of the Australian economy.

Having said that, do today’s first home buyers really have it tougher than their parents did?

Is it all really as bad as what many commentators and the media would have us think?

I know when I bought my first property close to 40 years ago properties were unaffordable then.

According to head of property research at ANZ Bank Paul Braddick, those looking to get their foot in the proverbial property door are no worse off today than purchasers from the 1980’s.

Contrary to popular belief; Australian property prices have increased in line with rising incomes and lower interest rates over the past thirty years. Over the last few decades, increasing income and falling interest rates have been capitalized into house prices.

The increased number of households with two wages, as well as higher average female incomes, have put buyers in a better financial position than they enjoyed three decades ago. And recently flat or falling house prices plus falling interest rates have made properties more affordable for many.

Before we complain too much about the cost of new housing, let’s not forget that the type of property many first homebuyers expect today is very different to what their parents started off in. In fact they expect to start off in the type of house it took their parents 30 years to be able to afford.

Today’s first home buyers are looking for bigger homes on a large block of land with an ensuite, probably a double garage, all the modern conveniences including air conditioning, a dishwasher and let’s throw in a media room for good measure.

It’s also worth noting that today around 70% of people own their own home and just 30% rent. In 1911 those figures were reversed at that time the typical house would have only had one bathroom an outside toilet.

By the way… did you know Australia can lay claim to having the largest homes in the world with the average size of our new homes being 214.6 sq mts.   While US home-builders have been building smaller homes over the last few years, Australian homes have continued to get larger.

So what is affordable?

There are many ways to measures housing of affordability and many of the models used by overseas economists are not really relevant to Australia.

To me the key question is: do households in 2013 have more or less disposable income after buying a home and paying down the mortgage than their predecessors?

Last year the RBA found that, contrary to popular myth, today’s households actually have more disposable income than at any other point since they began their analysis in 1993.

Of course, there are some good explanations for this. Per capita disposable income has been growing very strongly, and has outpaced house price appreciation, over the last 7-8 years.

Over the longer-term, we have had a structural decline in the unemployment rate from the double digit peaks in early 1990s to just over 5% today. And then we have had the rise of multi-income households care of a secular increase in the female participation rate.

Last month, the Reserve Bank Assistant Governor Christoper Kent presented the following chart which shows that payments on new housing loans now represent less than a quarter of disposable income due to the property price correction we experienced in 2011 and the in first half of 2012, at a time when interest rate fell from 4.75% to 3.00%,.

On the other hand, wages continued to grow on average across Australia last year by 3.4%. 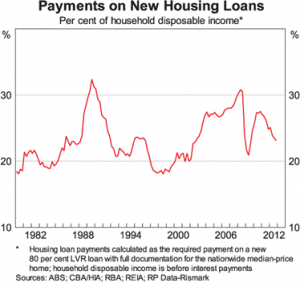 Currently interest rates are at record lows and may even going to fall a little further at a time when incomes are likely to keep rising as our economy chugs along and this will make housing even more affordable for many this year.

Now may be as good a time as any to buy your next property.

What are you going to do?

If you’re interested in securing your financial future through property investment, now may be a good time to buy property – the property markets are moving before our eyes.

Of course I’ll keep you up to date with how to take advantage of the changes happening in our property markets in future updates, but as so much is happening in property nowadays I’ll keep you updated almost every day with a short post in my blog – just click here and subscribe to it – that’s a different subscription to my regular newsletter – it gives you my short daily updates.

'Why is housing so unaffordable – or is it?' have 4 comments