So what is a speculative bubble?

“A spike in asset values within a particular industry, commodity, or asset class. A speculative bubble is usually caused by exaggerated expectations of future growth, price appreciation, or other events that could cause an increase in asset values.

This drives trading volumes higher, and as more investors rally around the heightened expectation, buyers outnumber sellers, pushing prices beyond what an objective analysis of intrinsic value would suggest.”

The above is a chart of the earnings ratios of an Indian company (INFY) during the tech stock bubble.

Being a graph of earnings ratios, all other things being equal (i.e. unless the company truly did have phenomenal growth prospects which then reversed) you might expect the trend to be fairly flat. 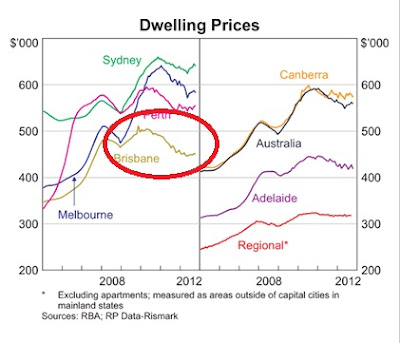 This is a graph of Brisbane dwelling prices which is not inflation-adjusted. In other words, over time you would expect it move up moderately as household incomes increase.

Brisbane is the world’s biggest bubble:

Now, there are plenty of people out there who have stated that Australia is in a property bubble.

But I couldn’t for the life of me think why Dent picked out Brisbane – the cheapest capital city on the Australian mainland in which to buy a house – so I didn’t pass comment at first. To me a bubble implies unsustainability.

Here is what a genuine expert on the Brisbane property market, Michael Matusik, had to say:

“As at mid-October, the average Brisbane household pays just 22% of their household income towards their mortgage.  This is on par with the proportion paid in the early 2000s and mid-1990s.”

So while you might argue that property in Brisbane is expensive, it is not easy to argue that today’s prices are not sustainable.

So why did Dent pick out Brisbane as the biggest bubble in the world of property?

Here are 6 of the reasons why:

1. Every man and his dog predicted an Australian property bubble!

There is a huge market for reading about an Australian property bubble. Thousands talk about a bubble in the hope that prices crash so that they can buy prime-location real estate themselves (which is the very desire and dynamic that made prices high in the first place, right?)

Jumping on the Australian property bubble bandwagon is not going to generate Dent headlines and sell him his precious books. He needed to get more specific, and…

From the ancient Mayans to Mystic Meg, humans love specific predictions! As people we take great comfort in having specific information that we can rely on or turn to, even if deep down we know that the information cannot be any more accurate than a tealeaf reading or a tarot card.

Back when I used to work in a real job in a factory that actually made useful stuff out of wood (as opposed to financial services paper-shuffling), one of my fellow warehousemen, a bloke called John if memory serves, based his entire financial future upon the predication – his absolute certainty – that one day he would win Britain’s National Lottery.

John’s theory was that if he played often enough and for long enough he would be sure to win eventually. It hasn’t happened yet, but as the ‘Voice of the Balls’ (or was it just the ‘Voice of Balls’?) used to say…”It COULD be YOU!”

Investors would draw blood for John’s level of certainty in their exploits. It’s known as the search for the Holy Grail: the information or trading system that will make them an infallible investor. It doesn’t exist, but that won’t stop people searching for it. Still, that’s OK because…

3. It doesn’t matter if you’re wrong!

Read Dent’s past books they are stocked full of pretentious, third person “we foresee the next boom period running from January 2037 to March 2039” type predictions and the overwhelming majority of them are just plain wrong.

It would be tempting to say that Dent’s infamous ‘Dow 40,000’ prediction that the Dow Jones would reach 40,000 points by the end of the last decade was the crappiest prediction in the entire history of crap predictions, but even that howler wouldn’t get the gig. His NASDAQ prediction was even worse!

This hasn’t stemmed the book sales though. People love to read about predictions, but Dent has a problem in that…

4. Sydney was a spectacular miss!

Dent’s last great Australian property prediction is all set to be another huge clanger. “Sydney property prices to drop by 55% by 2014” – well, the clock is running down on that baby and it looks like RP Data is set to record yet another increase in prices this month. Dent desperately needed another target, and…

5. Brisbane prices have been correcting!

As the chart above shows, Brisbane has corrected a little. Depending on your preferred data source, Brisbane house prices have reportedly fallen by around 12% from their peak. Dent will cling to that as a ‘head start’ on his prediction if prices do fall further. And if he’s wrong, well, no-one will remember anyway if history is anything to go by.

So, Dent’s approach is to generate a headline by hitting people where it hurts, in their own backyard by…

If you want to really hurt someone, you don’t blithely make flippant or derisory comments in their general direction, you deliver them a specific insult that is targeted directly in their face and preys upon their worst fears.

And has it worked? You betcha! Dent got his press coverage and will sell thousands more books as a result. Voila! A master craftsman BS merchant in action*.

*Harry – if Brisbane’s house prices fall by 85% I promise I will take it all back.
—
The INFY chart is sourced from the Fundoo Professor Bl

'Why Harry Dent picked Brisbane as a Bubbletown' have 14 comments