The song at this stage of the residential property cycle would normally sound something like this….

Well, that doesn’t seem to be happening.

The more optimistic would end this sentence, with a ‘yet’. 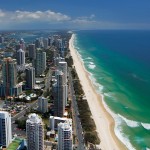 Yes, investors are crossing the Tweed & the current level investor interest from the southern states reminds me of the early 2000s, but unlike back then, net interstate migration to Queensland still remains low, close to an all-time low in fact.

See our first chart below.

So why are fewer people moving to Queensland?

Most people move interstate for work. Sure, many might like Queensland’s climate better, especially during winter/spring, but their primary motivation is work.

Queensland is creating new jobs, but these aren’t really big paying positions, nor are that many full-time.

It is more than just post-mining influence at work here; the overall ‘casualisation of work’ trend is having an impact.

As people age, they move less & when they move, they don’t move as far as they did when they were younger.

They like to stay in the same neighbourhood if they can.

Yes, they like to be closer to the kids & especially the grandchildren, but given the low cost of air travel, plus the vitality of our older folk (my parents are almost always travelling), they don’t see themselves as ‘baby sitters’ these days.

[sam id=37 codes=’true’] One of the biggest killers of housing movements is stamp duties.

This cost – determined as a percentage of the end price – stops many local moves & a lot of interstate movements as well.

It should be a flat fee; the same for all residential property transactions regardless of location & be say, $1,000 per sale, and not the exorbitant amount that is currently incurred.

If you want to free up our larger, underutilised homes & get downsizers/retirees into something more practical for them, then stamp duties must be reduced & dramatically so.

Otherwise, these two market segments (which are about to grow substantially in size) will age in place; & we will struggle to house, affordably, our younger generations.

I don’t care how many times the media try to project Brisbane/SEQ as having lost its “red neck” & somehow acquired, magically, a sophisticated aura; most of my interstate friends & relatives don’t buy it; nor do I.

I think we need to really think through what we are & the image we want to convey. We shouldn’t be competing with Sydney, Melbourne or Perth. We need to find our own voice.

For example, I was in Toowoomba last week giving a presentation for the Chamber of Commerce, where a short promotional video was played outlining why someone should consider living in the Darling Downs.

It wasn’t “resources” this or “infrastructure” that, it was a great clip about a bushie & how he lived under a “big sky”. It worked a treat – so much so that I nearly bought a Toowoomba house.

Anyway, for mine, Queensland needs to work on its image.

It seems lost if you ask me…and it is reducing the number of bums of seats.

'Why aren’t more people moving to Queensland' have 1 comment