To gain insight into the way Australians approach and handle their personal finances, Australia’s leading financial comparison website RateCity has released an extensive consumer study, uncovering the impact money has on relationships, health and well being.

Key findings from the Cash of the Country report:

1. Both men and women feel that they are the boss of the relationship when it comes to money

A huge 84 percent of men and 61 percent of women think they are the financial decision-maker in their household.

“There is a struggle in Australian households around financial decision making,”

Over one in four Australians admit money has caused issues in their relationships, with slightly more men (28 percent) than women (24 percent) revealing cash causing problems.

“Lending money to your loved ones is usually a bad idea, because it can put your relationship in jeopardy. What often happens is that you don’t get paid back, and that can ruin the relationship,”

3. The more formal the level of commitment in a relationship, the less couples are likely to spend on each other

Married couples are less likely to buy Valentine’s Day gifts for one another than couples who are in the early stages of their relationship.

“The report showed that as a majority, Australians tend not to ‘buy in’ to the hallmark holiday and as you would expect, they are more likely to make the effort early on in the relationship,”

Most of us associate impulse shopping with women, but even though slightly more women admit to impulse shopping (75 percent of women vs 73 percent men), men spend much more on their impulse purchases.

According to the findings, the majority of women spend less than $500 impulse shopping, while the majority of men tend to spend between $500 and to $10,000 – and some even more – on their impulse purchases. Alex Parsons said:

“Fast spending has become easy with credit cards, and more and more Australians find ourselves spending money that we don’t have.

One in six of the men who admitted to having impulse shopped for $10,000 or more had an income of under $75,000 per year, which is really alarming,”

5. Debt is a deal breaker for women

Australia is becoming an increasingly indebted nation, with the latest figures showing we now have over $49 billion on our credit cards and around $34 billion in negative balances accruing interest – and that’s bad news for bachelors with heavy financial baggage.

The research shows that having your finances in order was more important for the slightly older generations of women.

6. Men are more honest about what they earn and owe

“Just as debt is a deal breaker for many women, having a stable income can be a deal maker. Our findings show that the more they earned, the more likely men were to be open about money to their partners,”

When it comes to the finer things in life, women and men have different priorities.

“The findings from our Cash of the Country report clearly show that there are differentiating approaches to personal finances between men and women.

“Interestingly, only a tiny proportion of men (7 percent) feel that their female partner is the financial decision-maker in their relationship and conversely only 21 percent of women think their partner is the boss. They can’t both be right can they?

“When it comes to spending money on each other, the more formal the level of commitment in a relationship, the less likely couples are to buy gifts for one another – 50 percent of married couples not purchasing on Valentine’s Day, compared with 32 percent of de facto couples and 26 percent of people who are dating.

“The key to being in excellent financial shape is good information. Overall, men spend more time – a month or more – researching and comparing things like home loans, credit cards, car insurance than women.

“RateCity’s exclusive agreement with Canstar means we have access to incredibly accurate and detailed information about a huge range of consumer financial products and this new report complements this data with an understanding of consumer behaviour around finances,” 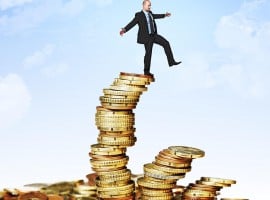 'Who is smarter in money matters men or women?' have no comments