There’s lots of talk about a looming oversupply of Brisbane apartments.

Brisbane is under construction.

Anyone driving through the Valley, Newstead or South Brisbane can see that.

The streets are lined with hoarding plastered with impossibly beautiful vistas of the CBD from across a computer-rendered infinity pool.

Buyers want to know what Brisbane is going to look like in three years’ time.

How will the landscape of this city change as a result of the recent surge in apartment construction?

We will discuss the future apartment market in Brisbane. 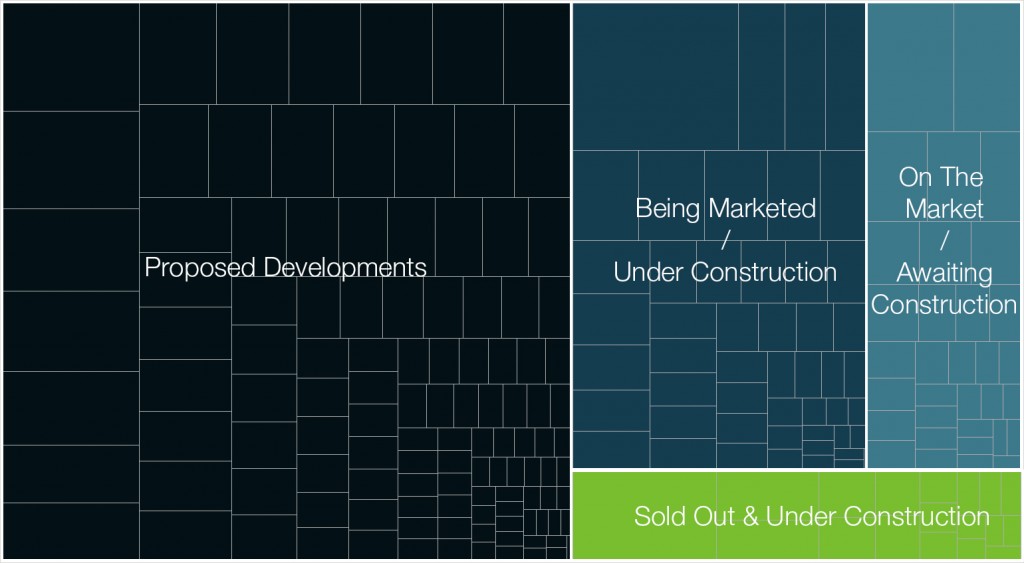 The current apartment pipeline for Brisbane is as depicted above.

There are currently 18 projects under construction across the inner city that have recorded complete sell-outs, totaling approximately 2,600 apartments.

There are a further 9,170 apartments under construction across 50 buildings that are actively being sold and advertised to the market-place.

Many of these have had significant levels of inquiries and sales in recent years.

On top of this, 33 brand new developments are being marketed and are in the pre-construction sales phase.

There is a further pipeline of more than 21,000 apartments that have not yet hit the market.

These projects are in planning and the likelihood of them making it into the marketplace depends on a variety of factors, the biggest of which surrounds finance and risk.

This represents a supply of apartments which is hard to comprehend.

A supply which, so far, has easily been absorbed by the Brisbane market.

Most recently, over the 12 months to September 2015, there were an unprecedented 5,696 unconditional off-the-plan apartment sales in Brisbane.

At this rate of sale, if everything were to be approved by council at the same time – there would be a supply of just under 4 years in the pipeline.

This straight-line mathematical interpretation of the data is, however, flawed.

Outside influences such as development finance, ability to deliver this product and continued absorption rates at peak levels make the possibility of all this stock entering the market impossible

Where Will These Apartments Be Built?

It is clear from the map the majority of new construction is planned around two precincts – the Inner North-East (from the CBD and Fortitude Valley up to Newstead) and the West End-South Bank Peninsula of the Brisbane River including Woolloongabba.

These two precincts are going to undergo extensive development over the next few years.

In fact, 72% of all Inner Brisbane’s new apartment stock will be contained in these regions.

Type of Stock Being Delivered

The Brisbane apartment market is evolving and this is reflected in the type of apartment pipeline being delivered.

In 2016, it is estimated that the majority of stock delivered will be two bedroom apartments – accounting for 53% of all new stock.

A further 42% of delivered apartments will be one bedrooms and only 5% will be three beds.

This is vastly different to what we have observed in the past. 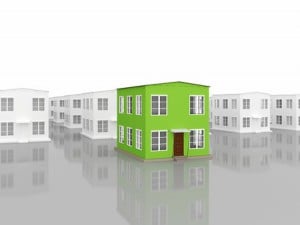 For example, in 2012, the majority of new apartment stock delivered to Brisbane’s Inner Ring had just one bedroom.

This apartment type accounted for 51% of constructed apartments for that year, whilst two bedroom apartments made up 44% of new stock and three bedrooms constituted the remainder.

These statistics reflect the changing market.

Demand currently exists for larger, two bedroom apartments and a higher percentage of three beds as the market moves more towards owner-occupier stock.

Looking forward, it is clear that this is going to continue and owner-occupiers are going to have a larger influence on the Inner Brisbane apartment market between now and 2018.

This is reflected in the type of stock that is planned to be delivered.

In 2018, more and more apartment buildings will include dedicated owner-occupier stock, as evidenced by the growing proportion of three bedroom apartments that are planned to be delivered between now and then.

In 2018, 7% of all new apartment stock will have three bedrooms.

'What the future holds for Brisbane apartments?' have no comments