Along with total listings rising by just 1.2% in a month that normally sees much larger rises, some interesting results for the month of February, with asking prices for the 8 Capital Cities remaining unchanged for houses, while rising by 0.6% for units.

This apparent lull in prices for February has meant that the 12 month change in asking prices for the nation has fallen to 6.7% for houses and 4.1% for units.

Looking at the capital city break down, the real surprise was Sydney, where asking prices for houses fell by 0.5% for the month.

Units rose 0.8%. Canberra continued its market downturn with vendors reducing their asking price once again – houses falling by 2.8% and units by another 0.8%.

I have been somewhat cautious of the results coming out over January and February (particularly for Sydney) as historically, it is a time when the industry is largely in a lull due to the holiday season. Indeed, when we look at the data I note the following:

For February 2014, 89.40% of online listed properties at the national level had an advertised price.

This is largely unchanged from February 2013 when 89.42% of online listed properties advertised with a price tag.[sam id=41 codes=’true’]

Based on anecdotes, I actually don’t recall a time when there were so few properties advertised with an asking price, particularly in Sydney.

To me that is actually a sign of a very hot market.

Vendors, particularly in Sydney have become reluctant to advertise a price on their property, for fear they could sell themselves short! Crazy days.

I’m sure though that this month will bring in more normal levels as listings tends to rise at this time of year.

For those who want to see the asking prices in their local area, please click here. 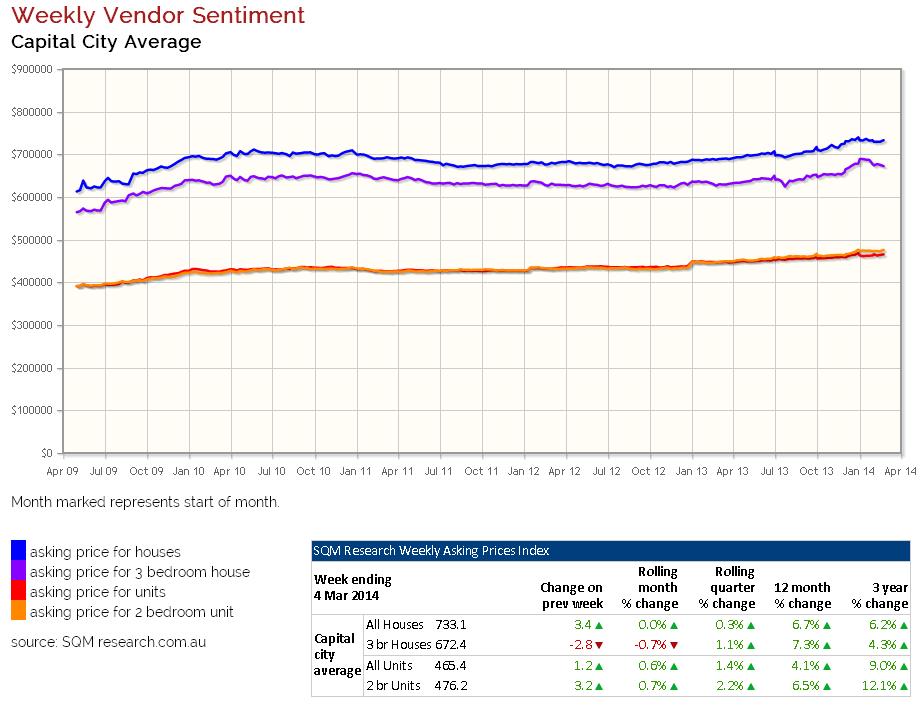