Figures released by SQM Research this week have revealed the number of residential vacancies remained tight across the nation in September 2015, with a vacancy rate of 2.3% posted based on 70,037 vacancies.

Vacancies remained the same in most capital cities, excluding Melbourne, Canberra, Darwin and Hobart, where vacancies dropped over the month of September.

Darwin and Canberra recorded the biggest monthly fall with vacancy rates down 0.2 percentage points from August 2015.

Hobart and Melbourne soon followed with vacancies falling 0.1% over the month of September.

Over the year, vacancy rates in Hobart have continued to fall with a significant 0.4% drop from this time last year.

Vacancy rates in Melbourne have also fallen 0.3% over the last 12 months, bringing the total number of vacancies down to 272 in September 2015.

Both falls reflect the tightening of both residential markets post downturns.

Similarly, asking rents in Perth are down 7.5% for houses and 7.2% for units.

Asking rents in Sydney, Melbourne, and to a lesser extent Brisbane have also recorded modest rises for the same period.

It was a steady result for residential property vacancy rates in September after the rise recorded in August.

Hobart appears to be entering into a very tight rental market with a vacancy rate now down to 1%.

Asking rents have also been accelerating there.

On the other hand, the cities of Perth and Darwin still look very weak. 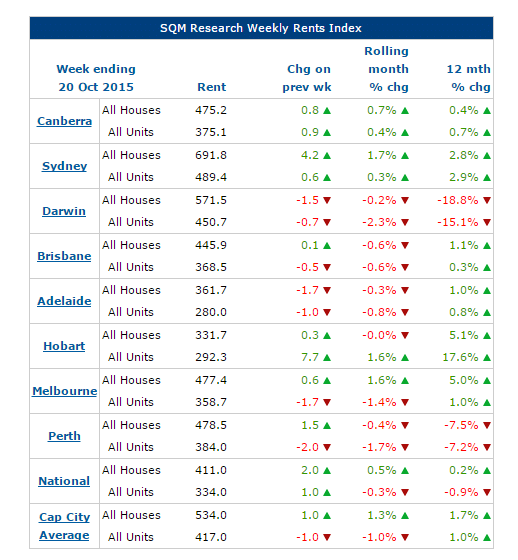 'Rental vacancies remain tight this month' have no comments