Data released by SQM Research has revealed vacancy rates tumbled across all capital cities in March, falling to just 1.5% in Melbourne and 1.7% in Sydney, with upward pressure likely to be maintained on rents in the nation’s two biggest cities.

Nationwide, the national vacancy rate dropped to 2.3% in March, down from 2.4% in the previous month, based on 73,554 vacancies.

Vacancies dropped in Perth and Darwin, as well as Hobart and Brisbane.

The numbers reflected a seasonal tightening in vacancy rates.

Vacancies usually drop in the early months of the year as people return to their jobs after the summer break and students go back to universities in March.

Significantly, the vacancy rate continued to fall in Melbourne, despite predictions of apartment oversupply.

Even in the spots where we would have expected to see oversupply, such as Docklands and Southbank, we are not seeing it, where there are thousands of apartments, new and old.

In Sydney too, despite high levels of inner-city apartment construction, the vacancy rate is just 1.7% across the city and .3% in the CBD.

We may, however, see a bounce in April across cities as demand for rental properties drops back.

Hobart’s vacancy rate is the lowest of all capital cities at just 0.6%.

Reflecting its lower vacancy rate, asking rents rose in Melbourne over the month to April 12, up by 1.6% for units and 0.7% for houses.

Sydney unit rents too jumped by 1.6% over the month, as well as a 1.5% rise for Canberra units, though housing rents fell in those two cities.

Darwin asking rents continued to fall, down 2.6% for houses over the month, while unit rents were down 1.1%.

Perth has again posted the largest yearly declines, with unit asking rents down 9.6% and house rents down 7.3%. 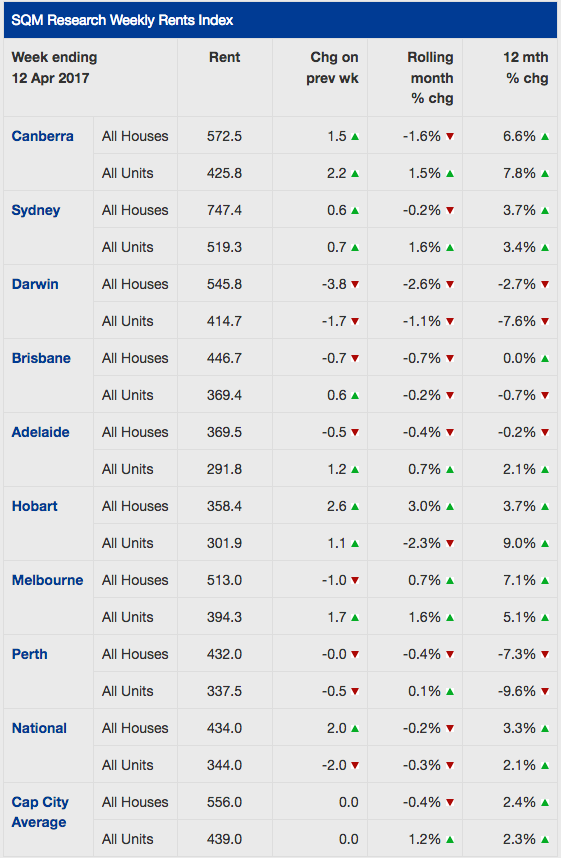 'Vacancy Rates Tumble Around Nation' have no comments