The Domain national vacancy rate for houses and units combined fell to 2.2 percent down from the 2.4 percent recorded for December.

The house vacancy rate was reported at 1.9 percent with units at 2.8 percent. 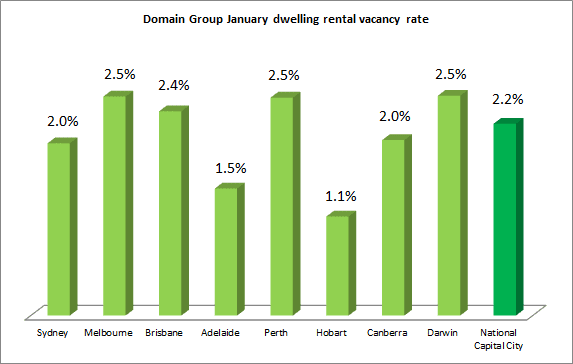 All capitals reported a fall in vacancy rates with the exception of Perth where the rate was steady despite seasonal effects and indicating a continuation of the recent easing in the local rental market.

Hobart, Canberra, Darwin and Adelaide all recorded low vacancy rates for houses below 1.5 percent with Sydney also tight at 1.8 percent.

Perth reported the highest house vacancy rate over January at 2.4 percent.Vacancy rates for units were generally higher than houses although similarly falling over January as a result of seasonal impacts on listing numbers.

Darwin reported the highest unit vacancy rate at 4.5 percent – the same recorded by that city over December. 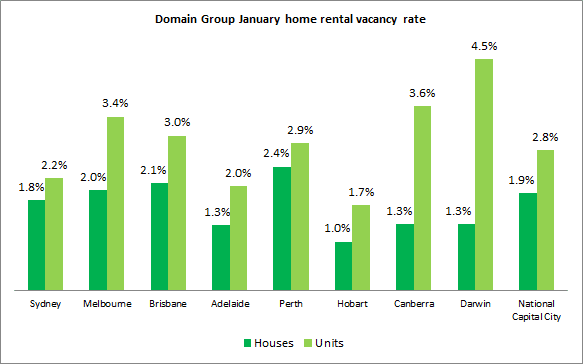 [sam id=54 codes=’true’]  Although headline vacancy rates are likely to ease as the impact of seasonal effects on listing numbers moderates, an underlying shortage of house rentals is set to remain in all capitals with the exception of Perth.

Lower interest rates will encourage increased activity from investors, particularly in the strong Sydney market, but this is unlikely to impact rental market dynamics significantly in the shorter-term.

Continuing upward pressure on house rents can be expected as a consequence.

High levels of new supply of inner city apartments in some capitals however will continue to keep vacancy rates higher for the unit rental market with the prospect of some relief in rent growth for tenants.