Residential vacancy rates remained tight in most capital city markets over January despite the seasonal impacts of the peak holiday season.

The national vacancy rate for houses was steady at 2.3 per cent over the month with the unit vacancy rate easing slightly to 2.7 per cent.

The house rate is marginally higher than the 2.3 per cent recorded over January 2015 however the unit vacancy rate has over the year, down from 2.9 per cent.

Overall vacancies for both houses and units nationally remained at 2.4 per cent and down from the 2.5 per cent recorded a year ago in January 2015.

Canberra, Hobart and Melbourne are clearly the toughest markets for tenants with vacancy rates of 0.7 per cent, 0.9 per cent and 1.4 per cent respectively.

Vacancy rates in these markets are all below those recorded a year ago. 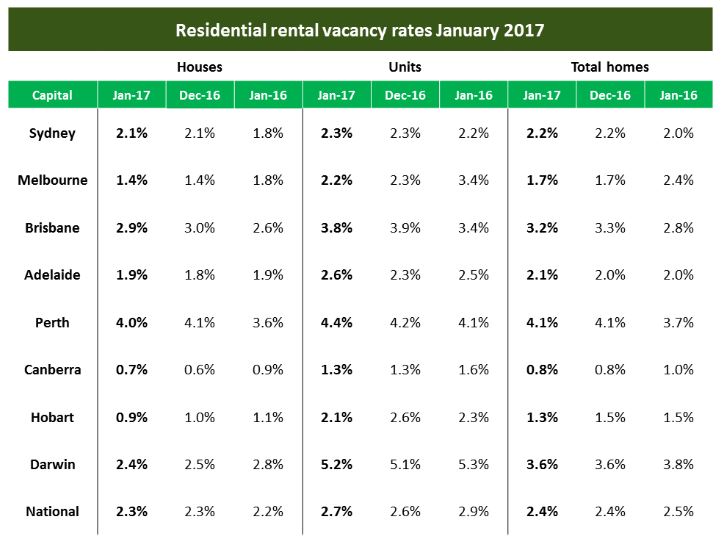 The Adelaide rental market also remained tight with a vacancy rate remaining at 1.9 per cent.

The Sydney housing market vacancy rate remained steady at 2.1 per cent over the month and has eased from the 1.8 per cent recorded over January 2015.

The Brisbane property market rate eased slightly to 2.9 per cent but also remains higher than the 2.6 per cent recorded the year before.

The Darwin vacancy rate continued to tighten, down to 2.4 per cent over January and well below the 2.8 per cent recorded a year ago.

The Perth housing market however clearly remains the most tenant-friendly of all the capitals with a 4.0 per cent vacancy rate over January, down slightly over the month but still higher than the 3.6 per cent reported over January 2015.

Unit vacancy rates generally remained higher than those for houses over January with most results similar to those recorded the month before.

Canberra unit rental vacancy rate also remains the tightest of all the capitals at 1.3 per cent and down on the 1.6 per cent recorded last year.

Hobart, Melbourne, Sydney and Adelaide recorded similar vacancy rates over January at 2.1 per cent, 2.2 per cent, 2.3 per cent and 2.6 per cent respectively.

The January results for these markets were similar to those recorded the year before with the exception of the Melbourne property market where vacancy rates have tightened sharply from the 3.4 per cent of January 2015.

Vacancy rates in Brisbane, Perth and Darwin remain the highest of all the capitals at 3.8 per cent, 4.4 per cent and 5.2 per cent respectively and are all well above the rates recorded a year ago.

Generally rental markets remain tight with strong competition particularly for houses amongst tenants which will likely continue to put upward pressure on rents and negatively impact rental affordability in a low income economy.

The mining capitals of Perth, Darwin and to a lesser degree Brisbane are exceptions with significantly more tenant-friendly markets.

Significant levels of new stock however are set to impact the market over the next year or so.

'Vacancy rates remain tight to start the year' have no comments