SQM Research have this week have revealed the number of residential vacancies climbed up across the nation in April 2015, with a vacancy rate of 2.3% posted based on 69,295 vacancies, up from 2.1% in February when vacancies were 63,906.

Rises were recorded in all capital cities, excluding Hobart where the vacancy rate remained unchanged.

The biggest rise was recorded in Canberra with a monthly change of 0.4 percentage points from March.

Over the year, vacancy rates in Canberra have remained tight with a small 0.1% jump from this time last year.

Modest climbs were also posted in Sydney and Adelaide.

Year-on-year, vacancy rates continue to rise in Darwin and Perth.

Darwin has posted the biggest yearly rise in its vacancy rate to 3.5% from 2.1%, reflecting the continued impact of the commodities downturn weighing down on employment and property markets in that city.

Notably, our research data records falling asking rents in Perth, Canberra and, in particular Darwin, which has recorded a fall in asking rents of 14.5% for houses and 6.3% for units for the past 12 months.

In contrast, Sydney has recorded a rise of 3.6% for houses and 1.1% for units. Asking rents in Adelaide and Hobart also recorded modest rises for the same period.

Some regions may beat this outlook such as South East Queensland, parts of Melbourne and Hobart where tenancy demand is accelerating.

Darwin and Perth will continue to display weakness as the mining downturn continues to bite hard. 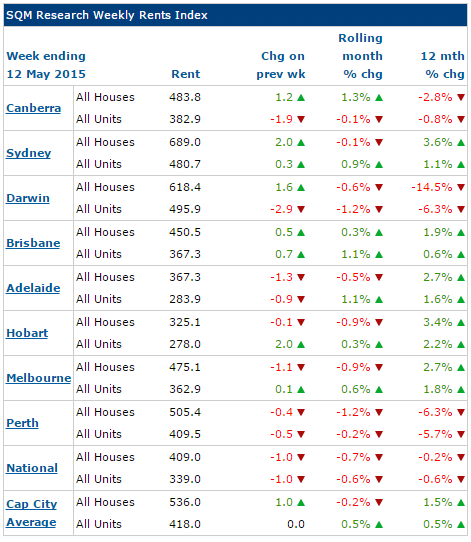