Housing data released by SQM Research has revealed the vacancy rate tumbled to just 1.7% in Melbourne in February this year, a near 10-year low, while falling in other eastern capitals against a steady national vacancy rate.

Nationwide, the number of national residential vacancies in February with 78,029 rental homes available, giving a steady national vacancy rate of 2.4%.

The last time the vacancy rate was 1.7% in Melbourne was in June 2007, almost 10 years ago, so this is quite remarkable.

Despite predictions of looming apartment oversupply in inner-city Melbourne, we are seeking vacancies fall, rather than rise.

Even in in the Docklands, the vacancy rate tumbled to just 2.4 per cent last month, down from a high of 6% in December.

The rental market could tighten further in Melbourne as some apartment developments are scaled back, which would cut supply and could pressure rental growth higher in that city.”

Hobart’s vacancy rate is the lowest of all capital cities at just 0.7%.

Only Canberra reported a higher annual asking rent growth for houses at 7.6%, with weekly asking rents up to $578.80.

Darwin continues to record falls in asking rents for houses, down 1.5% over the month, while unit rents were down 1.3%.

Unlike Melbourne or Sydney, Brisbane’s unit rental market is slightly oversupplied, which has kept down rental growth.

But in the other big cities, rental growth is strong, and well above the inflation rate and wages growth, suggest rentals are getting more and more unaffordable for the average person. 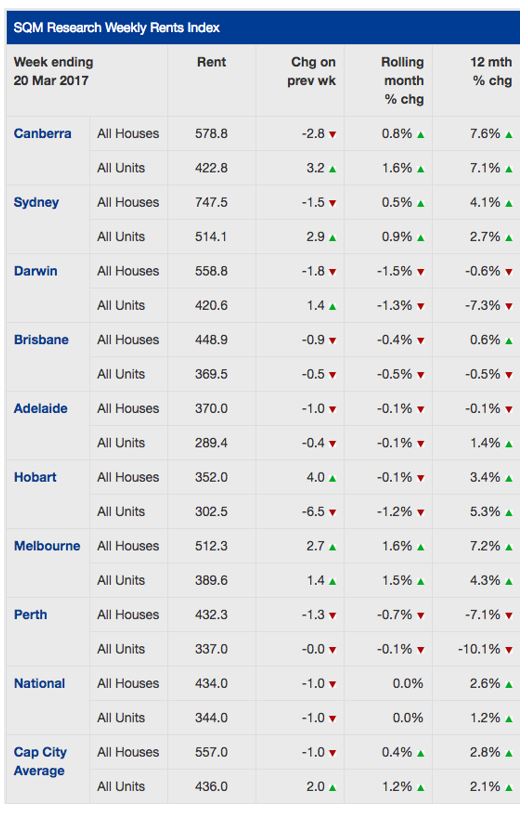