SQM Research this week have revealed the number of residential vacancies rose slightly across the nation in October 2015, with a vacancy rate of 2.3% posted based on 70,827 vacancies.

Over the last year, vacancies are continuing to soar across Darwin and Perth.

Vacancies in Darwin have risen by 75% over the last 12 months, bringing the total number of vacancies to 997.

Both Hobart and Melbourne recorded yearly falls with vacancy rates down 0.1% for Melbourne and 0.2% for Hobart.

Year-on-year results for Sydney reveal a tight residential market, with October recording a vacancy rate of 1.6%.

Yearly falls have also been recorded in Perth, with asking rents down 6.4% for houses and 8.4% for units.

Asking rents in Melbourne, Sydney, and Canberra have also recorded modest rises for the same period.

There is a sharp contrast in the national rental market at this point in time.

Clearly, vacancies have been soaring in Perth and Darwin, while our east coast capital cities have generally been stable.

This is just one indicator on how the mining downturn has effected the economy.

Clearly, not everywhere has been effected, but those cities and townships that do have exposure have been hit hard. 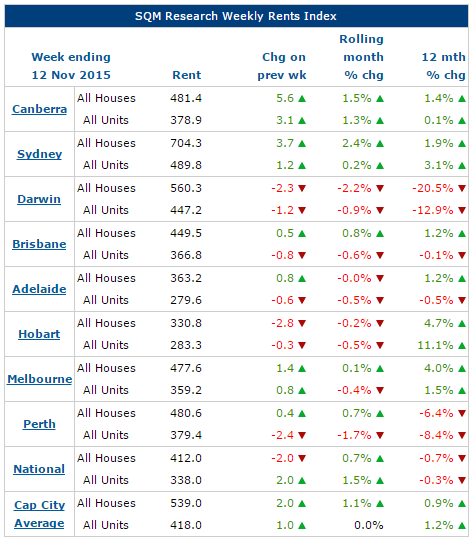 'Vacancies Rise Yet Again for Perth and Darwin' have no comments