Many Australians are neglecting their financial situation and could be missing out on thousands of dollars by not finding better deals, according to a new survey commissioned by one of Australia’s biggest comparison websites finder.com.au.

The survey of 1032 participants across Australia, found that two in three people don’t review their financial goals often enough, with only one in three checking their progress each month.

More than two-thirds (68 percent) review their financial goals just twice a year or less, and 32 percent don’t use anything to track their progress such as online tools or resources. 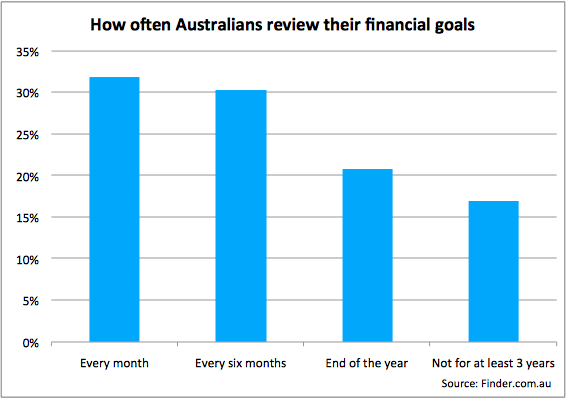 Spokesperson Michelle Hutchison, said there is too much money being wasted by Australians who aren’t being smart with their money.

“This survey clearly shows that too many Australians are in a ‘set and forget’ mode with their financial situation and as a result are wasting money. While most of us have financial goals, many aren’t doing enough to achieve them.

“By neglecting their financial situation many Australians are potentially wasting thousands of dollars by not finding better deals.

“For instance, the survey found that one in 10 mortgage holders don’t pay attention to interest rate movements and wouldn’t have realised their repayments have fallen from rate cuts. As most borrowers have a variable rate, that’s potentially 250,000 households who are not taking advantage of lower interest rates by keeping their repayments high.

“If your lender recently cut your home loan rate by 25 basis points and you have a typical $300,000 mortgage, that would be worth about $50 less in repayments. Add this to your loan each month and you could potentially save about $27,000 in interest and cut a 30-year loan term by two years.”

Other surprising results from the finder.com.au survey included:

'Too many Australians neglect their finances.' have no comments