The slowdown in the economy hasn’t made Australia any less popular as a destination just yet.

In fact, annual permanent and long-term arrivals increased to a new record of +835,310 over the year to January 2019, up by more than 6 per cent from a year earlier. 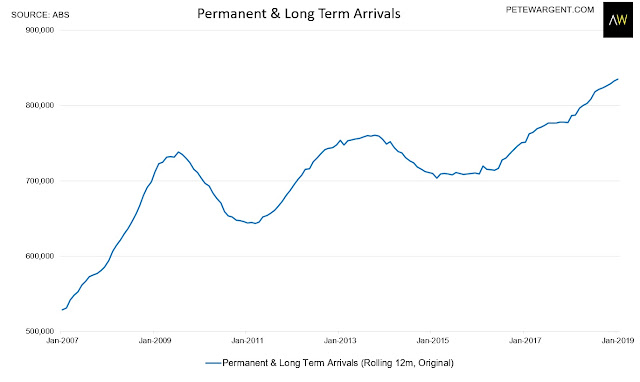 There are departures to account for as well, of course.
But when the Q3 2018 demographic estimates are released next week we’ll likely see population growth tracking at around half-decade highs of 400,000 per annum (or thereabouts), with an internal migratory shift towards south-east Queensland.

Tourism is galloping along too, with the annual number of short-term arrivals now passing 9¼ million.
After slowing last year, New South Wales notched a new record over the year to January 2019, while Victoria is just storming along, and Queensland has flattened out. 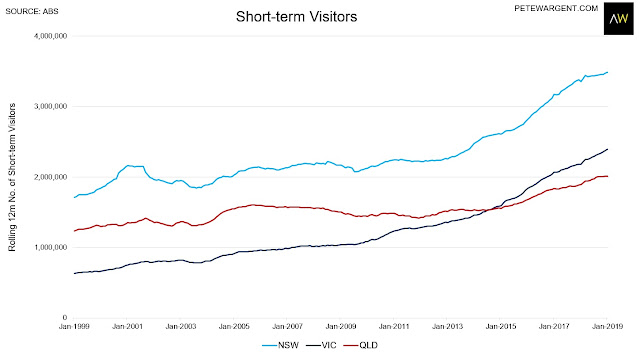 Chinese visitors had appeared to plateau, but then the seasonally adjusted figure hit a new record in January, with the usual Lunar Year factors yet to be fully decoded.
Over the year to January the number of Chinese visitors thus increased by about 6 per cent to 1.46 million.
Annual visitors from India increased to 360,000. 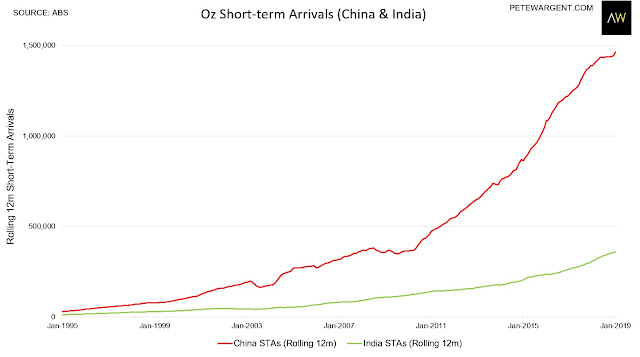 Japan has become an increasingly popular destination for Aussies heading abroad, perhaps for the ski seasons over in the Japanese Alps (h/t Commsec).
Annual education arrivals topped 600,000 in December for the first time, but took a small step back in January. 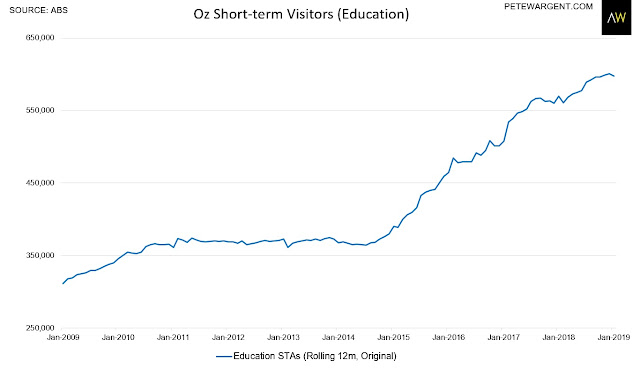 Overall, there’s no sign yet of the slowdown in the economy being reflected in a slowdown in the growth of Australia’s headcount, while tourism continues to thrive.
Of course, headline numbers only tell a part of the demographic story.
Projections released by the ABS this week showed that the number of formed households in Australia’s capital cities may explode by 50 per cent or more over the next 25 years, driven by huge increases in Sydney and especially Melbourne.
That’s mainly due to population growth, but also driven by an increase in disjointed households, and a lower share of households containing couples with children.
That all adds up to a heck of a lot of demand for housing, especially as the nation becomes wealthier and more people have second homes.