Yes – they’re back again. Those who say we’re in a property bubble.

Including economist Christopher Joye, director of Yellow Brick Road, who wrote in the Australian Financial Review that Australia’s housing bubble leaves others far behind.

He found that since the end of 1995, Australian home values have experienced total capital gains of 283 per cent, massively outstripping any other peer country. 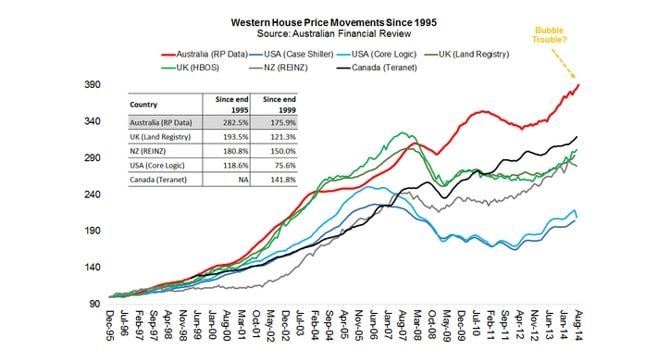 The AFR recently asked the chief economists of the big four Australian banks what they thought about Australian property, and if some of these claims that we were heading towards a bubble were true.

They said that we’re not in bubble territory.

The perceived expensiveness of our property market is as much as anything a social issue, affordability issues.

We simply don’t have the speculative credit element there to describe it as a bubble.

Low-income earners getting heavily leveraged was the problem in the United States we don’t have that issue here.”

Housing credit’s running at the bottom end of the range the last 30 years.

You need to see banks easing their lending standards as they chase more dubious borrowers that’s certainly not happening and you need a general expectation that house prices are going to keep rising forever. Now there is an element of that I think.

If unemployment in our models gets to around 8 or 9 per cent then you get the same problem as you’ve got everywhere else but we’re undersupplied, interest rates are low, we think unemployment’s gone up but nowhere near 9 per cent, so no bubble.

I think you get bubbles when house prices run well ahead of income growth. We just haven’t seen that.

That’s what the experts say.

What do you think? Please leave your comments below.