Despite yesterday’s media headlines to the contrary, the world didn’t end.  I am still breathing.  How about you?

So instead of Armageddon; Europocalypse; Death by Keen or something similar, we all seem to get by.  The Henny Pennys seem to have survived the farmer’s axe once again, only to live another day of worry.  Yesterday’s lacklustre 0.25% cut in the cash rate will no doubt have them all in a spin.

Well, stuff them all – today is something special.  It is an opportunity to take some time to reflect; an early New Year’s Day so to speak.

Today, for most Australians the Transit of Venus will be visible with Venus appearing as a black spot moving across the sun from 8.16am to 2.44pm.

Well it won’t be back until 2117 – yep, 105 years from now.  And just reflect for a few moments on how much effort man made to observe and measure this astronomical event… Captain Cook et al.

Today we have a free iPhone app to watch it, but somehow that isn’t the same as gazing upwards in wonder about where we, and it, are all going.

We humans seem to underestimate the good things and overvalue the utter rubbish.  And what we spend much of our time on these days, for mine, is increasingly plain bunkum.

So in this frame of mind – even more delicious given it is mid-week and all – here are my anti-bunkum things.

Isn’t it about time that the real world turned its back on the self-serving, hypocritical, attention-grabbing, politically motivated vacuum heads called ratings agencies: Standard and Poor’s, Moody’s and Fitch?

Surely, there must be some other source of advice of this nature available from less biased, conflicted and publicly discredited sources than these, who often seem to be at the centre of conflagrations of their own making.

Daily and even monthly indexes

Prices-schmices.  What is the fascination with regular property price indices? Give it a rest guys, you need to be in it for the long haul.  Frankly it is all just white noise. 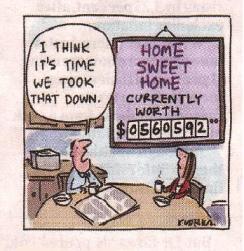 And in fact, what is measured is also plain bunkum.

The median or average price – regardless of when or how frequently it is measured, or on what geographic scale – will have no bearing on what your property is worth or how much you should pay.

I mean come on!

Reality my backside, what with five camera angles; metal screws in Bear’s handmade bamboo ladder; planning a meal in five seconds after being told the two key ingredients etc.  And everyone in the house watching it on their own plasma, computer or Apple TV.

Give me a board game any day of the week.  Or better still, a good book; although I am quite partial to Seinfeld & NYPD Blue re-runs…. and I could re-watch The West Wing series anytime.

But if you are going to watch something on the idiot box, get everyone at home involved.  What ever happened to the Sunday night family movie?

Oh, what crap it is.  Yes, it helped make Singapore and other Asian centres what they are today, and helps make living in the tropics more bearable.  True, too, it creates white noise – the good kind this time – to help one live downtown.

But give me a fireplace in winter and a big hat over my house (overhang for those youngins who haven’t seen an eave) in summer.  In fact, a fire makes a bloody good replacement for the TV too.  Nature’s own entertainment and a friend in the bush.  Oh, how far we have strayed from the things that are really important, well at least from what many older boomers commute half way around the country for.  They might be onto something there.

Fancy food, lots of silly names and service as “cold as Christmas” as the saying goes.  Give me a home-cooked meal like Mum still makes, and dish me up some decent service, a smile and a whole lot of personality and I will be back with my family and friends every time.

And when at home, the simple meals are often the best – toasted cheese sandwiches; home-made pizzas on the Weber; eggs (with Belle’s bacon of course) on toast; tomato soup with crusty bread – and all hassle free, everyone relaxed and eating together.  And yes, even in front of that elusive Sunday movie on TV.

I am an analogue man.  Joe Walsh’s new album out later this week – just two sleeps left Australia – is titled such.  Yes, I use Apple everything but not all the time.  When I get home – it helps when the actual service at home is lousy – it is everything off until the next day.

Why not take a bath; have an afternoon nap (and on both Saturday and Sunday) or sit in the sun for a good while every now and then.  Go see your adult children rather than Skype or text them.  What is all the rush about?

Yes, I know it is easier said than done but what, if anything these days is the Transit of Venus actually good for?

Now we are getting on some shaky ground here.  Moving into some bloody murky waters Michael, given the amount of music I download from Apple.  But I never download a single, always the whole album.  In fact I don’t like the term album – music, as Jackson Browne often discusses on stage, is a record; a record of events of that time or place.  Good records resonate with many listeners; great records resonate deeply with you.

I often listen to Born to Run; Late for the Sky; Blue Valentine or Bella Donna, to name just a few, in their entirety; almost always by myself, in the quiet and often in the bath.  Candles glowing and incense burning if you must know.  Right now I am quite into lemongrass stink sticks.

Yes, I am talking to you Anonymous.  Bloggers who aren’t prepared to give their full name when replying get treated as spam on my blog.  Have the guts to stand by your convictions.  All we have, when it is said and done, is our name.

You of course have your own list.  And if you don’t maybe today might be a good one to start one.

As you read this blog this morning, I won’t be rushing to work.  This Transit of Venus will be my last and I won’t be wasting it.

So it’s goggles on folks and look up at your own peril, and don’t complain to me if you find what you are looking for.

Oh, and whilst discussing things that might be better gone, here is our final call for this week’s Matusik Pulse poll – If our housing is really too big what would you forgo?

Michael Matusik is the director of independent property advisory Matusik Property Insights.  Matusik has helped over 550 new residential developments come to fruition and writes the weekly Matusik Missive.  The Matusik Missive is free, however, reprinting, republication or distribution of any portion of this material, or inclusion on any website, is strictly prohibited without the written permission of Matusik Property Insights and may incur a charge.

'The world didn’t end yesterday – did it?' have 1 comment