Sydney is ranked 9th in the world when it comes to housing affordability, according to RiskWise Property Research …

But maybe it’s not as bad as that after all.

OurRiskWise analysis is at odds with the 14th Annual Demographia International Housing Affordability Survey released earlier this year which named Sydney as the 2nd most expensive city in the world for housing affordability, because we believe the metrics used by the survey to determine global rankings is too simplistic.

Our calculations showed Sydney actually ranked 9th in the world when it came to the least affordable cities to live and that ‘global cities’ are by far less affordable than initially thought.

This is because we compared only units (and not ‘dwellings’ that include both houses and units) and we estimated the price, for all locations of a 105sqm unit, as these are suitable for families, while Demographia used the standard international practice of ‘dwelling price’ to determine housing affordability.

The problem with this ratio is that it does not compare apples to apples.

For example, you can’t compare Hong Kong to Sydney dwellings when dwellings in Sydney include a high proportion of houses and also the average-sized unit in Hong Kong is only 46sq m, as compared to 105 sq m here.

It is not helpful as a comparison.

However, if you take the approach RiskWise did, which was to compare only units and assess the estimated price of a 105 sq m unit relative to price-to-income ratio, you’ll find that the results are completely different.

The point is, Sydney is not as bad as first thought when compared to other cities.

And yes, while it is unaffordable enough that families cannot afford a 105 sq m unit, the situation in other places is significantly more serious.

Sydney, as a global city, could potentially be even less affordable.

New York did not make it on to the list and London was ranked 10th.

The Demographia survey employed the Median Multiple (median unit price divided by gross annual median household income) to rate housing affordability, a measure widely used for evaluating urban markets and recommended by, amongst others, the World Bank and the United Nations, and also by the Harvard University Joint Center on Housing.

The survey ranks urban housing markets into four categories based on their Median Multiple, from “Affordable” (3.0 or less) to “Severely Unaffordable” (5.1 & Over).

However if you rated 105 sq m units around the world the results would be entirely different when comparing the dwelling price-to-income ratio, as seen in the graph below. 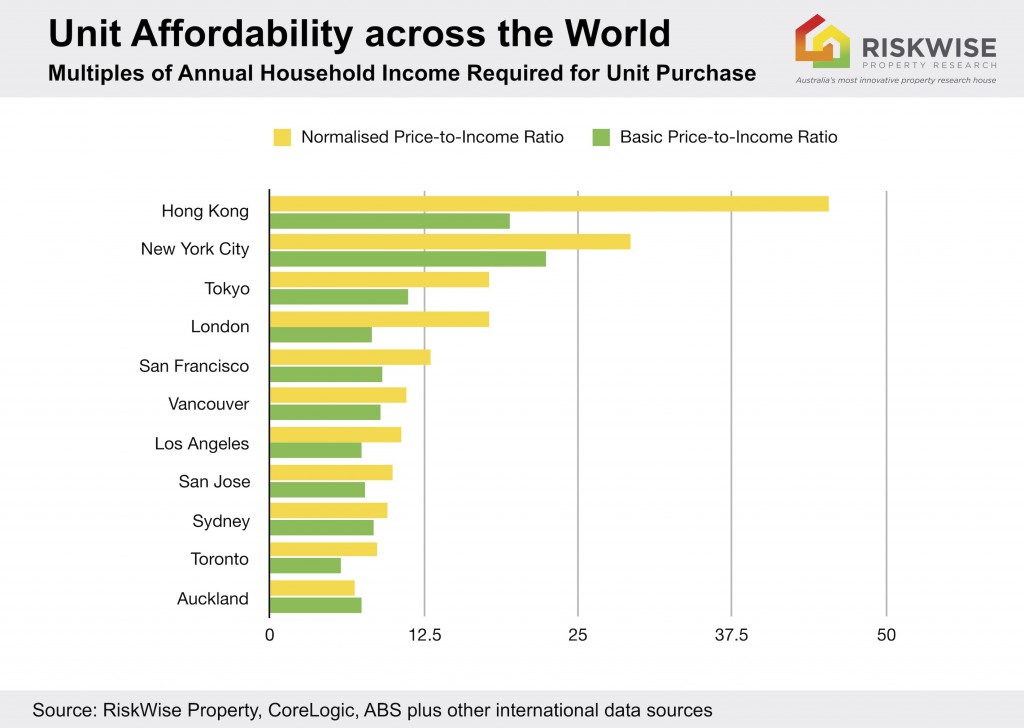 This leads us to the bad news which is all about the haves and have nots in these global cities as there is a complete disconnect between the price of units suitable for families to the median household income.

The people who own the majority of residential properties are mainly higher income earners and investors.

They are not standard household earners.

They are, largely, people at the top 50 per cent of income earners or investors who are cashed-up.

The gap between the household income they need to buy an inner-city unit to the income they really have is so huge a household with the median income would really struggle to afford one suitable for a family in those cities.

“It comes down to undersupply of suitable dwellings that force the price up and make them completely unaffordable, especially in Sydney.

And, in Australia, Melbourne came in right behind Sydney when it comes to unaffordability. 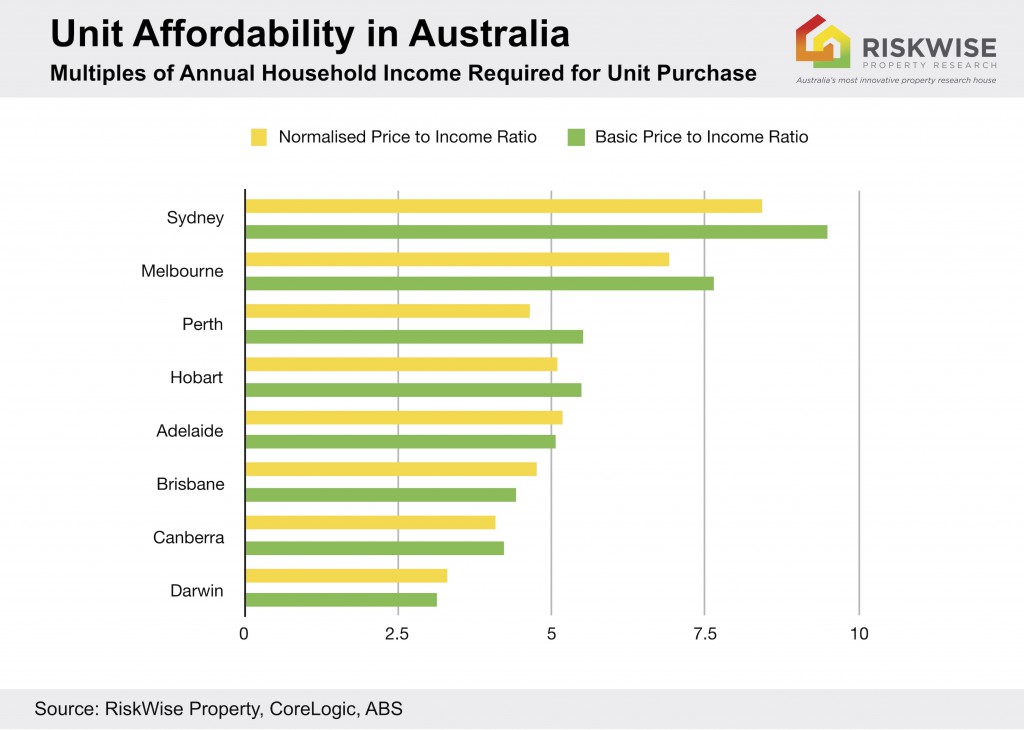 The difference is in Melbourne there is a better supply of units and, therefore less capital growth and more affordable properties.

Melbourne price growth has significantly decelerated, and in Sydney lending restrictions and the Banking Royal Commission have resulted in price reductions of 4.5 per cent in the past 12 months.

While there had been some small improvements in Sydney housing affordability, it was very modest (only a 4.5 per cent price reduction in the past 12 months).

NSW Premier Gladys Berejiklian has called this a ‘welcome turn of events for those trying to break into the market’, however, those counting on the current slowdown as a solution to housing affordability have  a very short-sighted view.

They completely misunderstand the gravity of the situation.

Put simply, unless there is a comprehensive strategic plan to improve supply, it is highly unlikely Sydney prices will reduce further.

To use the basic dwelling-to-price ratio and say Sydney is the second most expensive place in the universe and imply things can’t get worse … well, it doesn’t really work.

You have to understand the data and also that the situation could be significantly worse unless supply, and therefore affordability, is significantly improved.

A long-term strategic approach is needed instead of being happy there is a modest price reduction.