One of the significant changes to occur in Australian cities over the past 50 years, which has pushed up inner and middle-ring suburb property values, is gentrification. 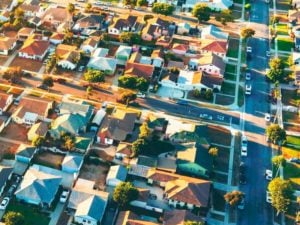 Interestingly this wasn’t caused by deliberate planning policy but resulted from a set of demographic changes that occurred in most major capital cities around the world, and especially in the inner-ring of city suburbs.

Gentrifiers were initially drawn to inner suburbs by the diversity of jobs, educational opportunities and lifestyle and this trend continue today as more and more Australians are swapping their backyard for balconies and courtyards.

So, in my mind, there’s no question that the best locations to invest for long-term capital growth are the inner and middle-ring suburbs of our major capital cities where the jobs are, where most people want to, live and where there is no land available for release.

As always… location is critical to the long-term performance of your investment.

In fact, location will do the majority of the heavy lifting of your property’s performance.

And moving forward in the post-pandemic world location – the neighbourhood we buy-in – will be more important than ever.

Being locked in a Coronavirus Cocoon reminded us of the importance of our neighbourhood.

If you can walk out of your home and you’re within walking distance of, or a short trip to a great shopping strip, your favourite coffee shop, amenities, the beach, a great park, you will appreciate the benefit and the importance of your neighbourhood.

Looking back over the last decade some neighbourhoods have outperformed others with regards to capital growth by 50%-100%. Many of the suburbs that have outperformed the averages are ones that are going through gentrification.

One way of identifying areas undergoing gentrification is to analyse those suburbs where incomes are growing, which therefore increase people’s ability to afford, and pay higher prices, for property.

Then you’ll need to drill down even further and choose the best spots in those suburbs.

Gentrification is a change in the fortunes of a particular suburb, including the changing demographics of the people who actually live there.

This generally is the result of a different class of people moving into an area who then invest their time and money into creating changes in their new neighbourhood.

As these changes take place, property values tend to grow as the area loses any stigmas and more individuals on higher wages move in, putting upward pressure on values.

There are six stages of gentrification, which you should understand so you can spot the next suburb about to undergo this modern metamorphosis.

As with all things real estate, change often starts with people.

This can involve people getting together to discuss the changes needed in that specific location.

Keep an eye on council or chamber of commerce meetings to keep abreast of any future planned changes.

This is the stage where planning comes in and developers, government entities and the local community often become involved.

Plans are drawn up, objections heard and any changes to the plans are considered at this point in the process.

Now is the time to look for any new innovative developments or community infrastructure such as new residential communities, hospitals, schools and rail or road projects.

Significant developments can have a big impact on an area, especially on such things as its lifestyle and employment opportunities.

NOW READ: The Power of Gentrification. How to use the cycle of the suburb to boost your investment returns

As well as state-of-art developments, there may well be intensive development happening.

This may include a new specific precinct, such as doctors’ rooms, which are an addendum to a new hospital.

The installation of such zones often brings skilled workers to the area that earn more money and help to progress gentrification of the suburb.

At this later stage, you often start to see population movements, which may include socio-economic changes.

It is when higher wages are a normal part of the suburb landscape that we start to see property values grow.

Things you should look for are:

This stage is where gentrification of an area really takes off!

When a large number of affluent people choose to move into a suburb, they often start to spend a lot of their resources progressing the gentrification trend.

Thus the gentrification of the suburb goes viral (in a good way) because these new wealthy residents are spending a lot of their money in their new community.

Of course, the process of gentrification is most common in a city’s inner- and middle-ring suburbs.

So if you want to own the type of property that will outperform the averages, and profit from gentrification, it’s this inner sanctum of suburbs that’s the place to invest.

ALSO READ: Identify a gentrifying area and capitalise on its growth